The Getting to Zero Coalition, a group of leading maritime companies and environmental NGOs dedicated to reducing carbon emissions from shipping, has released a new report calling for carbon pricing of about $200 per tonne of CO2. To make green future fuels more cost-competitive with conventional HFO and VLSFO, the coalition says that a combination of fees and subsidies will be required. The fee structure envisioned in the study would generate a giant pool of revenue, peaking in the mid-2030s at about $80-180 billion per year worldwide - creating ample resources for subsidizing higher-cost green fuels.

“The report shows that the introduction of a relatively low carbon price in the 2020s that is gradually increased to around $200 will make it possible to fully decarbonize shipping and create an industry that is powered solely by net-zero energy sources by 2050. This level of carbon price is in line what is estimated by for instance the IEA to be needed across all industries achieve the Paris Agreement goals, indicating that shipping is not a unique case,” said Kasper Søgaard, Managing Director of Global Maritime Forum, the coalition's sponsor.

The study calls for a mix of policy measures, enacted at the global and regional levels, to make green fuels more competitive. Recent reviews by LR and UMAS suggest that zero-emissions fuels will be twice as expensive as conventional options through the 2030s, creating an "urgent need for policy to close the competitiveness gap."

The report's authors reviewed multiple policy options, starting with carbon pricing and subsidies. Market-based measures for carbon include fixed carbon taxes; cap-and-trade carbon credit systems; and direct subsidies. They can be combined in ways that help to achieve decarbonization, by taxing the undesired behavior (CO2 emissions) and using the proceeds to subsidize the preferred alternative (zero-carbon fuels).

Using economic modeling, the authors examined two shipping-decarbonization scenarios: a 50 percent reduction in GHG emissions by 2050; and a 100 percent reduction in GHG emissions by 2050. The models start with a carbon price of about $11 per tonne in 2025, rising to $100 per tonne in the 2030s (and up substantially thereafter). If 100 percent of the proceeds from the fee were used to subsidize the price of zero-carbon fuels, the study finds that it would be possible to reach full decarbonization with a carbon price peaking at $180 per tonne in 2050 (below). 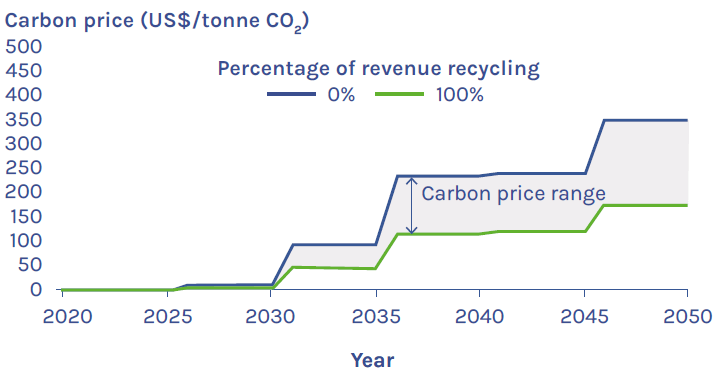 As 3.1 tonnes of CO2 are emitted for every tonne of bunker fuel burned, this fee would translate to a peak charge of about $560 per tonne of bunkers in 2050 - a tax of roughly 100 percent, based on current HFO pricing. The economic model suggests that a higher peak fee would be required if any of the proceeds were used for purposes other than green fuel subsidies.

"This year will be critical for decisions on climate policy in the IMO. Our report shows that there is no single perfect policy and that a successful transition will likely hinge on developing and deploying a mix of policies which can address different aspects of the transition. The imposition of market-based measures on the shipping industry is relatively uncharted, so the sooner policy-makers can surmount this challenge together, the better for the transition, the industry, and the environment," said Dr. Alison Shaw, Research Associate at UCL and co-author of the report.