Plans were announced to launch a Four Seasons branded yacht cruise line as the latest effort in the expanded ultra-luxury segment of the cruise industry. Fincantieri will build the new ultra-luxury vessel which is due to begin operations at the end of 2025 as the start of Four Seasons Yachts.

Fincantieri in July announced that it had signed a contract with an unnamed international company for the new ship along with an option for two additional vessels. The Italian shipyard group reports the cost of the vessel at approximately €1.2 billion, which would make the ship among the most expensive built on a cost per passenger basis. Four Seasons is saying that the vessel will cost $4.2 million per suite.

“Planned as the first of a fleet of Four Seasons Yachts over the next five years, the first vessel is currently being designed in Trieste, Italy by leading shipbuilders Fincantieri, one of the world's largest shipbuilding groups,” Four Season writes in the announcement of the new product. Fincantieri had announced the contract as one of the first new cruise ship orders since the COVID-19 pandemic and reported that it was subject to the owners completing financing.

Due to enter service in late 2025, the vessel will 679 feet long and have an 88.6 foot beam. The company reports it will have 14 decks and 98 suites for a passenger capacity of approximately 190 people. Crewing figures were not announced but Four Seasons says the ship “will have an industry-leading staff-to-guest ratio.”

“When we launch in 2025, there will be nothing else like it on the open seas,” said Pimentel. They are promoting that the vessel will offer nearly 50 percent more living space per passenger than is currently available in the cruise industry. The 95 accommodations will be able to interconnected to form different suite configurations. Suites will start at an average of 581 square feet of indoor/outdoor living space while 60 percent of the suites will be in excess of 818 square feet. The ship will also feature a four-level “Funnel Suite” at over 9,600 square feet with living space, a wadding pool, and private spa area. 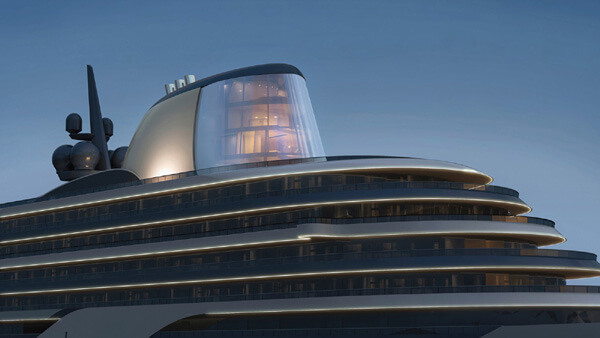 Design partners involved in the development of the ship include Tillberg Design of Sweden well-known in the cruise industry which will be the lead architect responsible for the design of exterior and guest suites. London-based Martin Brudnizki Design Studio will design of many of the yacht's guest areas.

In addition to a variety of dining experiences, Four Seasons says the yacht will feature the industry’s “first transverse marina.” Other amenities will be announced in the future.

Four Season, which currently markets 124 hotels and resorts and 50 residential properties, follows the lead of Ritz-Carlton which is also entering the cruise business under a similar licensing arrangement. Plans for the Ritz-Carlton Yacht Collection were announced in 2017, but have faced numerous delays with the first cruise ship now scheduled to enter service on October 15, 2022, after have been rescheduled at least eight times. The Ritz-Carlton cruise line also ordered two additional cruise ships due to enter service in 2024 and 2025.

Competition in the ultra-luxury segment is heating up with cruise lines both building more luxurious small ships and more brands launching. MSC is developing an entry into the luxury segment called Explora Journeys with cruise ships also being built by Fincantieri. Their first ship is due to enter service in May 2023.