The rapid growth in the offshore wind generation field is creating challenges both for ports and installers. The inefficiencies of the current processes are being highlighted as the number of projects increases and the size of the equipment grows.

An Australian company, Windthurst, has unveiled a new concept which they believe can address many of the challenges faced in the installation process and support the growth in offshore wind generation projects. Also, it might present a further solution for issues such as cabotage, which has been challenging the ability for projects to precede in certain jurisdictions.

Called The Oceandock LX, it is a 60,000m² self-propelled floating platform. It is equipped with dynamic positioning technology to obtain precise locations while because it is self-propelled can easily move within a project or region. It is also ballastable so that it can take up positions and remain on-site versus the current installation vessels that return to ports. 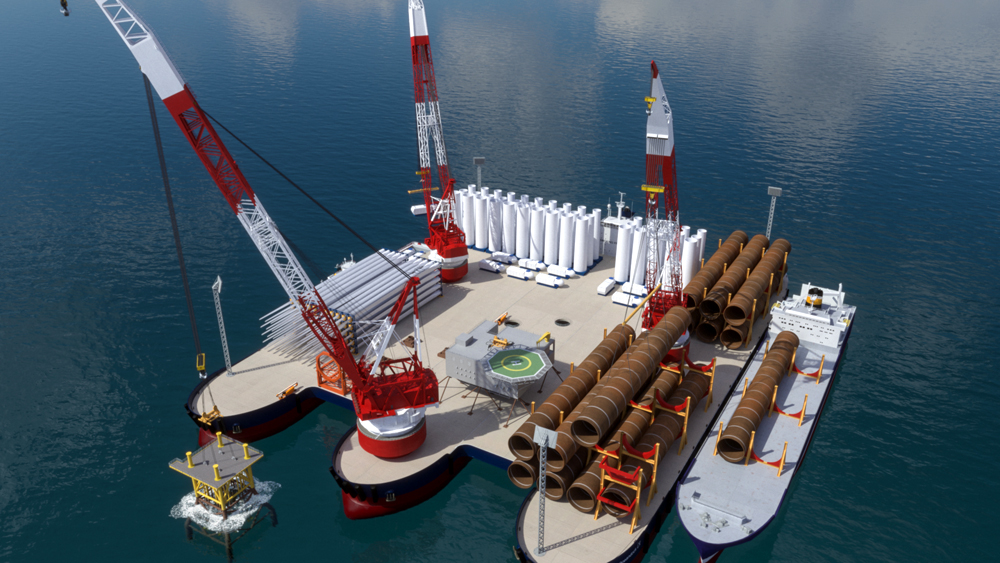 The concept is that once on-site, the Oceandock will serve as a port, warehouse, assembly point, and installation vehicle. It can house a crew of 100 for the project and with two tugs and 600 feet of dock space will function as its own port. Onshore, ports are being challenged by the space requirements of the equipment both to warehouse it as well as provide a location for pre-assembly. The current installation process can require three vessels and each installation ship is only able to accommodate between three and six of the large generators at a time.

Oceandock would be serviced by feeder ships delivering components that can be warehoused and assembled on site. With two boom lifts and three cranes it would have the capability to perform individual lifts up to 6,000 tons as well as to warehouse and stage 500,000 tons of substations, monopile foundations, and wind turbine generator components.

The concept design is nearly 1,000 feet in length and has a 700-foot beam, but Windthurst notes that it could be customized to an individual operator. The concept is a 500,000 DWT vessel that would operate safely in waves up to eight meters in height and as such could take up a position in deeper water. It would not be limited to near-shore installations.