The first LNG Floating Storage and Regasification Unit (FSRU), that is to be used by KARMOL as part of a power installation in Africa, arrived in Senegal as it prepares to deploy. After arriving in Africa at the end of May, it is being positioned at its mooring location and undergoing the commissioning process to join an existing powership in the port of Dakar.

Known as the Karmol LNGT Powership, the 105,000 gross ton tanker, that was built in 1994, recently completed trials after a conversion at the Sembcorp Marine in Singapore. The vessel is being operated a KARMOL, a joint venture between Karpowership and Japan’s Mitsui OSK Lines (MOL).

KARMOL sees the combination of FSRUs and Powerships as a ground-breaking solution to bring LNG utilized power generation to countries with no natural gas infrastructure or supply. The company believes that will provide a unique, cleaner solution to providing stable electric power to a broader range of developing countries seeking to expand their electric supply. 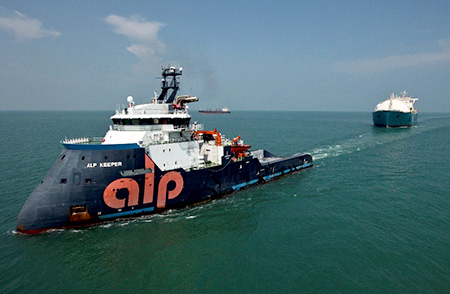 The FSRU will connect to a Powership, a floating power plant, owned by Karpowership, through gas pipelines. The Karadeniz Powership Aysegül Sultan, has a capacity of 235MW, and has been in operation since October 2019, supplying 15 percent of Senegal's electricity with 220MW of power to Senegal's grid. Previously the powership was fueled by traditional fossil fuels, which will now be replaced by the cleaner burning LNG.

The FSRU, which is 272 meters long, has a capacity of 125, 470 cubic meters of gas. The FSRU arrived in Senegal with an initial supply of LNG on board and the first refueling will be carried out by Shell in July.

The company plans to convert its fleet of Powerships to LNG to add a sustainable and affordable component to its operations. Currently, plans are underway to deploy the second LNG FSRU in Mozambique.