The first installation of an automated kite system for wind-assisted propulsion on a commercial vessel was recently completed and will begin trials early in the new year. The project, which is being undertaken by Airseas, a company developed by the aviation industry’s Airbus, will see a half-size demonstration version of the “Seawing” wind sail operating on transatlantic voyages.

Airseas, which was founded in 2015 as a spin-off from Airbus, looks to leverage the aeronautical experience and technology in developing its sail kite to provide wind propulsion assistance for large commercial vessels. The concept calls for the full-size version of the Seawing, a 1000m2 parafoil, to fly at altitudes of nearly 1,000 feet capturing the stable higher altitude winds to assist vessel propulsion.

According to Airseas, over approximately 500 feet above sea level the winds are more stable and stronger in strength. Their previous research shows that the Seawing would have a pulling power of up to 100 tons meaning it can contribute to propulsion for a ship of over 200,000 tons and over 1,000 feet in length. They project fuel savings on average of 20 percent by deploying the kite sail.

“A decade ago, we embarked on the ambitious project of channeling our unique aviation expertise towards creating a cleaner and more sustainable shipping industry,” said Vincent Bernatets, CEO and Co-Founder of Airseas. “Today, I am beyond proud to see that vision becoming reality, with our first Seawing ready. This first installation marks a significant milestone not only for Airseas but also for wind and other renewable propulsion technologies.” 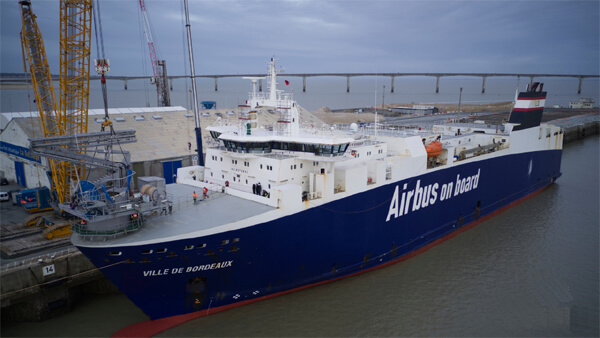 The installation of the automated wind propulsion system was completed aboard the 5,200 dwt Ro-Ro Ville de Bordeaux following collaboration and testing with Bureau Veritas. The vessel, which is chartered by Airbus and operated by Louis Dreyfus Armateurs transports major aircraft components between France and the United States, was outfitted with a 500 m2 demonstration version of the sail. Beginning in January 2022, they will commence six months of trials during the vessel’s monthly transatlantic crossings.

This round of testing follows a month of testing on a smaller scale 250 m2 version of the Seawing in April 2021. The company deployed the sail on a barge in the south of France to gain critical operational data as a step toward proving the concept. Longer-term, Airseas objective is to equipment up to 15 percent of the world’s commercial fleet with the technology, which they believe could result in an annual reduction of more than 40 million tons of CO2 emissions.