In January 2018, a passenger shuttle boat for an offshore floating casino suffered a devastating fire shortly after getting underway from its berth at Port Richey, Florida. One of the boat's engines overheated, and smoke was pouring from the vessel within minutes. The master changed course and intentionally grounded the vessel, and the passengers evacuated and waded ashore. One person was killed and several were injured in the casualty. 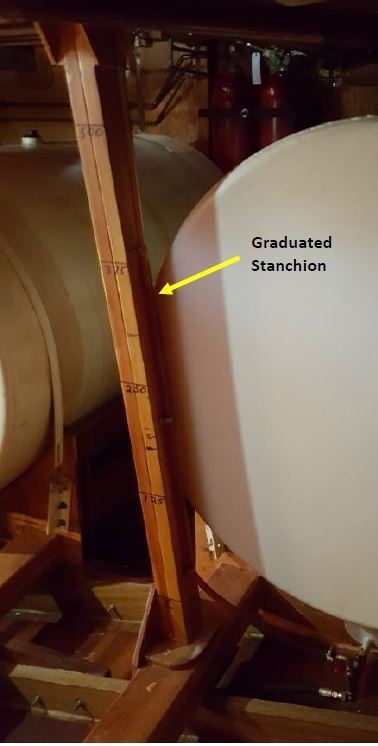 The fire was intense, fast-moving and ultimately burned the vessel to the waterline (image above). Investigators concluded that there were multiple causal factors, including a lack of company guidance on engine high-temperature alarms, lack of fire detection in unmanned spaces, poor  maintenance, insufficient crew training, and an inappropriate design of the vessel's fuel tank level-indicator system.

According to the Coast Guard, the fuel level indicating equipment consisted of clear plastic tubing fastened to a stanchion that was marked at intervals to indicate the tank volume (image left). Although this equipment did not start the fire, investigators determined that once the fire spread to the fuel tank compartment, the plastic materials in the level-indicating system melted, and the resulting leak fed the fire.

In general, the Coast Guard regulatory requirements for fuel systems on all vessels, from the smallest recreational boats to the largest passenger ships, require heat resistant materials for all components. The vessel was certificated as a Subchapter T passenger boat, and the regulations require vessels of this type to be fitted with fuel level sight glasses made of heat resistant materials, protected from mechanical damage, and equipped with devices that will automatically isolate the gauge from the tank in the event of a leak. (The boat's tank was equipped only with a ball valve to shut off the gauge.)

In an advisory, the Coast Guard strongly recommended that vessel owners and operators verify that their vessel’s fuel systems are compliant, including the construction of tank level indicating equipment. It also encouraged vessel inspectors to pay particular attention to this element of vessel construction.