An EU task force charged with implementing the UN arms embargo on Libya and preventing illegal exports, intercepted a ro-ro inbound to the Libyan port of Benghazi deemed to be carrying banned equipment. The vessel, which was the 24th inspection in a little over two years by the task force, is being diverted to an unnamed European port for processing.

The European Union Operation IRINI reports that the vessel currently operating as the Victory Roro registered in Equatorial Guinea has long been suspected of transferring military equipment to Libya. Built in 1978, the 44-year-old ro-ro is 3,000 dwt. Previously operating under the name of Luccello and flying the flag of the Comoros, the vessel was identified by the UN Panel of Experts on Libya as previously having delivered military vehicles to the country in March 2022.

A French Navy plane, assigned to Operation IRINI, initially detected the Victory Roro after the vessel crossed the Suez Canal and entered the Mediterranean Sea. AIS data shows that it had departed Aqaba, Jordan on July 13 and was expected to arrive in Libya on July 19. The Hellenic Navy frigate HS Themistokles then began monitoring the ship before the frigate of the Italian Navy ITS Grecale took over to conduct the inspection. Both warships are deployed under the operational control of Operation IRINI.

On July 18, forces assigned to IRINI launched the interception and boarding of the Victory Roro. Images released by the team show them boarding the vessel from a helicopter supported by the naval vessels. 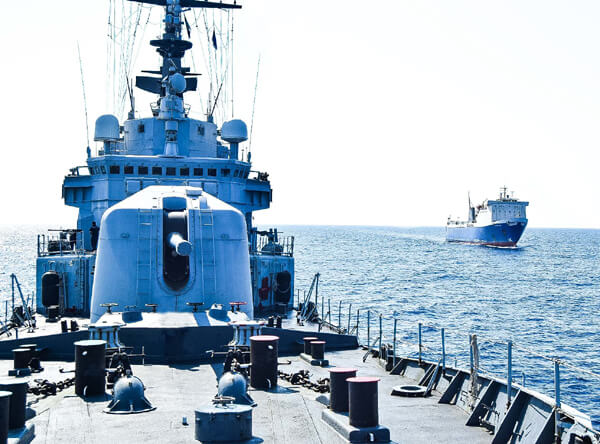 “During the inspection, the team identified dozens of vehicles designed or modified for military use and thus assessed to be in violation of the UN arms embargo on Libya. In accordance with UNSCR 2292 (2016) and its mandate, Operation IRINI seized the vehicles violating the UN arms embargo on Libya and is now diverting the ship to a European port for further proceedings,” reported Operation IRINI.

Current AIS data shows the vessel proceeding northwest in the Mediterranean. It is currently south of Sicily.

Launched in March 2020 with an initial three-year mandate, IRINI’s core task is the implementation of the UN arms embargo on Libya through the use of aerial, satellite, and maritime assets. Sea operations began in May 2020 with the first boarding in September as part of the mission to carry out inspections of vessels on the high seas off the coast of Libya suspected to be carrying arms or related material to and from Libya. Secondary tasks include monitoring and gathering information on illicit exports from Libya of petroleum, crude oil and refined petroleum products, capacity building and training of the Libyan coast guard and navy, and combating human smuggling and trafficking. The first diversion was of a product tanker carrying jet fuel to Libya.

In its first year of operations to June 2021, IRINI completed 23 boardings with one diversion and tracked over 900 suspected flights. Over 300 “friendly approaches” were also reported. A total of 24 member states are contributing to the effort with a multinational command based in Rome including Italian, French and Greek officers.