The E.U.'s PORTOPIA partners have presented the outcome of the project with new transparency tools developed.

The PORTOPIA project, which started in 2013, was aimed at the development of key performance data for European ports and the accompanying tools facilitating data collection and analysis, assisting the industry in moving towards a more sustainable and competitive port system. The tools include environmental dashboards, port governance trends and a user perception measurement tool.

In 2017, waste was the most monitored issue, as in 2016. There has been an increase of 21 percent of ports monitoring this aspect of environmental performance over the last four years. It is followed by energy consumption (that increased 15 percent since 2013), water quality (rising 19 percent) and air quality (+17 percent since 2013). Marine ecosystems and terrestrial habitats are the issues that have a lowest percentage of ports monitoring them. 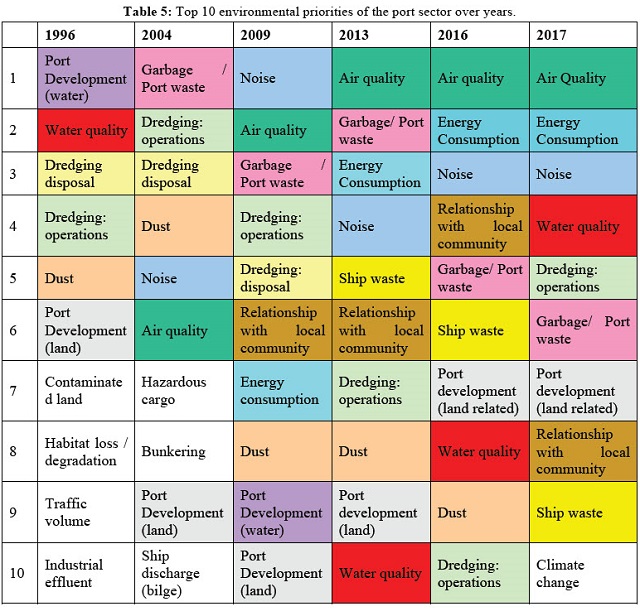 The North-German container ports (initially only Hamburg and Bremerhaven, but since 2012 also
Wilhelmshaven) recorded a growth of 0.6 percent between 2007 and 2016 to reach 14.94 million TEU in 2016. Southern European ports are on the rise. This is particularly the case for the Greek container port system (effect of volume rise of Piraeus), the Portuguese ports (mainly due to the success in the port of Sines) and the North-Adriatic ports.

The western part of the Black Sea port region recorded a decline of some 640,000 TEU in the 2007-2016 period which represents a traffic loss of some 42 percent. This development demonstrates that shipping lines, for the time being, prefer a hub-feeder model in the Med to service the Black Sea area instead of direct deepsea calls in the Black Sea. 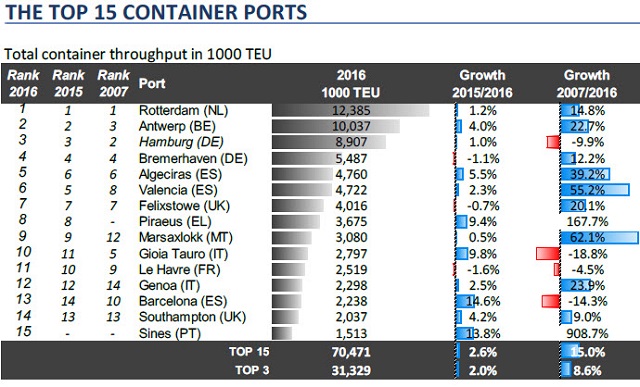 The top trade partners in 2016 were for export, the U.S. with 21 percent and China with 10 percent, followed by Switzerland, Turkey, Russia, Japan, and Norway. For imports, China led with 20 percent of the total trade value, followed by the U.S. with 15 percent and Switzerland with seven percent. In the period 2014-2016, Russia lost a position in the top ranking, both in imports and exports.

Michaël Dooms, the project coordinator said: “Beyond the statistics and the indicators, this project has foremost dealt with creating a culture of transparency and trust, as well as value-creating technologies to deal with performance and analysis. It therefore creates a solid basis for further developments highlighting the performance of the European seaport industry to their stakeholders, supporting better relations and improved strategic decision-making on the individual, regional and international level when it comes to the management of port infrastructure and services.”

At its General Assembly, the European Sea Ports Organisation (ESPO) gave the green light to invest in the continuation of the data digitalization process and further develop the PORTOPIA platform.