As the salvage team working on the Golden Ray approaches the final cut and the removal of the last sections of the wrecked car carrier, a local environmental group is calling for experts from the U.S. Navy’s Salvage Division to become involved. After the recent oil spill, which was the largest since the cutting and removal began, the Georgia group One Hundred Miles fears that the last sections could lead to another significant spill, which they warn could be catastrophic to the sensitive marshes along St. Simon’s Sound.

“As we enter the last stage of salvage operations, significant concerns remain,” the environmental group writes on its website. “As much as 44,000 gallons of heavy fuel oil, along with other hazardous chemicals and debris, remained onboard when initial cutting began.”

The group is urging the U.S. Coast Guard Commander for the region, Admiral Brendan McPherson, the Commander of the 7th District of the U.S. Coast Guard, to ask the U.S. Navy Salvage Division for their expertise and assistance with the remaining clean-up process. “The Navy's expertise, equipment, and additional manpower can improve the outcome of the salvage operation, and their involvement is necessary to prevent further injury to human and environmental health.”

Over the weekend, the Unified Command announced that it had finally been able to remove section six of the wreck after a delay while they had addressed the recent oil leak. On August 13, they lifted section six onto the barge after completing the removal of debris and sediment, and the following day tugs towed the barge to a response facility south of Mayor’s Point Terminal. 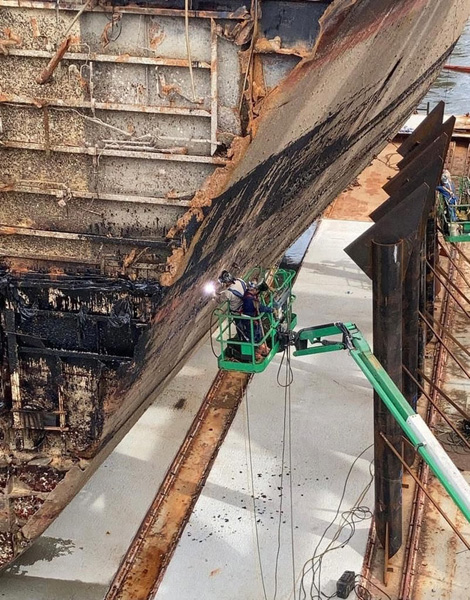 The environmental group’s concerns about the remaining hazardous materials aboard were highlighted by a small oil discharge this weekend with the Unified Command reporting that approximately 25 pollution response vessels quickly mitigated an oil discharge using oil skimmers, Current Busters, and a sorbent boom. In total, on-water pollution response teams recovered approximately 2,300 gallons of oil during the controlled lifting operations that began on July 31 for section six, according to the Unified Command.

One Hundred Miles also wrote to the Coast Guard commander alleging inadequacy of the booms surrounding the ship’s environmental protection barriers contending that the boom was only built to withstand currents less than one knot even though Georgia’s coast has currents of four knots.

A spokesman for the salvage operation speaking to the local Brunswick News said that the team had been challenged by the “rapidly changing currents within the sound,” but that they were constantly monitoring the wreck site and surrounding areas and had scaled up their response teams within 48 hours of the most recent oil spill, with the teams continuing to work across the area. 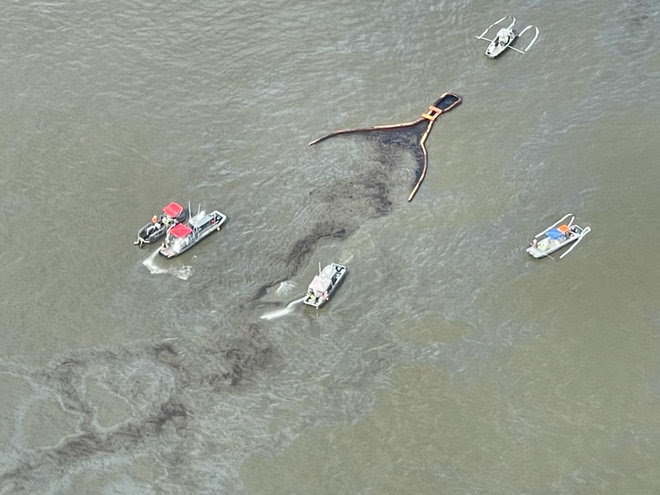 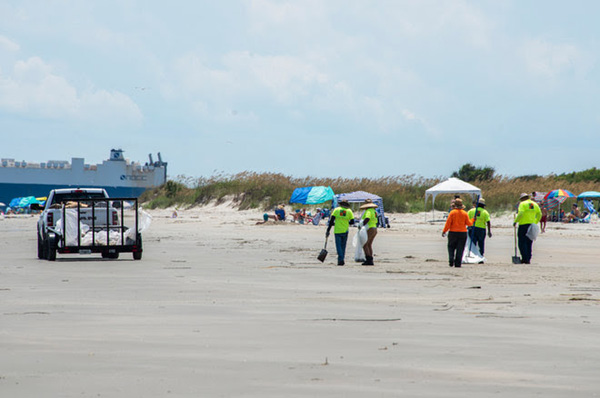 The environmental group says that it is unclear how much oil remains aboard in the last two sections of the vessel and worries that another large spill could happen based on the leak experienced when the team started raising section six from the water preparing it to be loaded on the recycling barge. The Unified Command originally reported that the vessel had approximately 380,000 gallons of fuel when it heeled over in the sound in September 2019. After some initial oil leaks, the salvage team removed 327,000 gallons of fuel at the end of 2019 according to the newspaper, leading to the contention of the environmentalists that more than 40,000 gallons could have been trapped aboard the vessel.

The Unified Command’s spokesperson told the Brunswick News that they had not expected the scale of the last leak this late in the salvage operation. However, they said that the command has already been and continues to consult both with the salvage experts at the U.S. Navy and U.S. Coast Guard.

With section six having been removed from the site, the VB-10,000 being used for the cutting and lifting operations began a refitting period on August 15 to prepare for the final cutting operation to separate the two remaining sections of the wreck. The VB 10,000 rig will be repositioned over the remaining 153-foot section of the wreck and the final cut will begin. After the last two sections are removed for recycling, the operation will move into its final phase which includes a review of the site and remediation.