Eni has been granted offshore lease extensions for the Greater Nooros field, one of the most prolific areas of the Nile Delta, by Egyptian Authorities.

The Nooros field is currently producing 32 million cubic meters of gas per day, corresponding to about 215,000 boed. Eni, through its subsidiary IEOC, holds a 75 percent stake if the Concession in partnership with BP, which has a 25 percent stake. The operator of “Nile Delta” is Petrobel, a joint venture between IEOC and Egyptian General Petroleum Corporation (EGPC). 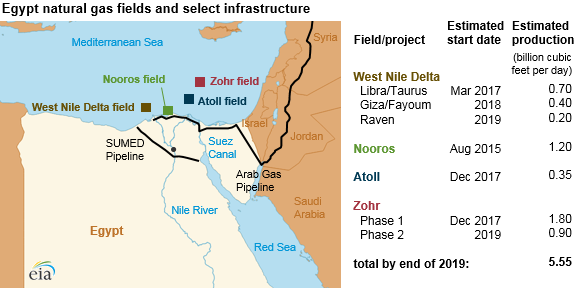 Eni has been present in Egypt since 1954 and is the country's leading producer with equity of approximately 300,000 barrels of oil equivalent per day.

Despite this, natural gas production in Egypt has been in decline, falling from a 2009 peak of 5.8 billion cubic feet per day (Bcf/d) to 3.9 Bcf/d in 2016, based on estimates in BP’s Statistical Review of World Energy. The startup of a number of natural gas development projects located offshore in the eastern Mediterranean Sea near Egypt’s northern coast has significantly altered the outlook for the region’s natural gas markets. The West Nile Delta, Nooros, Atoll, and Zohr fields were fast-tracked for development by the Egyptian government and have provided a substantial increase to Egypt’s natural gas supply. The Zohr field’s estimated recoverable natural gas reserves of up to 22 trillion cubic feet (Tcf) would make it the largest natural gas field in the Mediterranean, based on company reports gathered by IHS Markit. The Zohr field is currently producing 1.1 billion cubic feet (Bcf) per day and is expected to increase to 2.7 Bcf per day by the end of 2019. 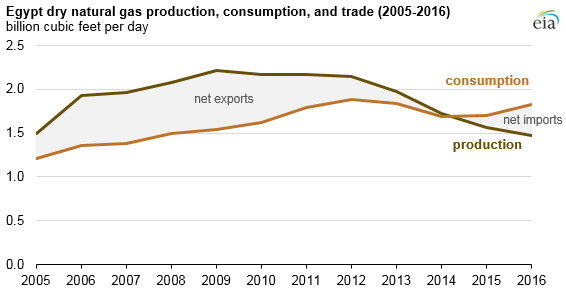 Meanwhile, domestic demand for energy has grown, driven by economic growth, increased natural gas use for power generation and energy subsidies. Faced with this growing demand and declining supply, Egypt had to close its LNG export terminals to divert supply to domestic consumption. Egypt became a net natural gas importer in 2015, and although LNG exports resumed in 2016, Egypt’s net imports of natural gas continued to increase. The Middle East Economic Survey (MEES) indicated that Egypt will still need to import small volumes of natural gas in the coming years, particularly for the power sector.