Norwegian authorities late today declared a state of emergency fearing that a Dutch heavy-lift vessel that has been adrift off the coast was in immediate danger of grounding and causing an environmental incident. After having calling off efforts earlier in the day to board the drifting vessel due to weather, they staged a nighttime effort airlifting a salvage crew aboard to attach a towline while also mobilizing their oil spill response resources. The tow is now underway to Breisundet outside Alesund for further inspection.

Teams from the Norwegian Coastal Administration and Coast Guard have remained on scene monitoring the vessel the Eemslift Hendrika since the vessel issued a distress call on April 5. The vessel began listing after its cargo shifted during a storm approximately 60 nautical miles west of Alesund, Norway. The captain and crew abandoned the vessel fearing it could capsize in the storm. 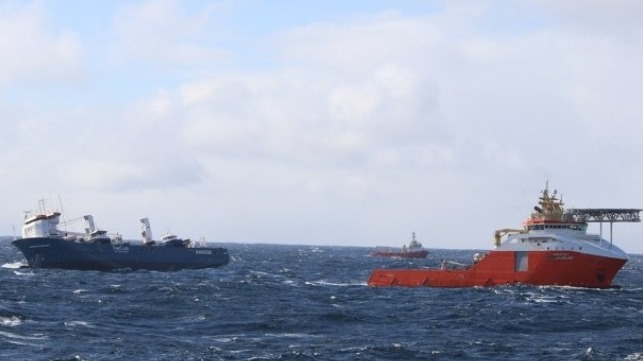 Saying the conditions had changed late this afternoon and into the evening, the Norwegian authorities said they believed the vessel was in danger of coming ashore within the next eight hours unless they took immediate action. The vessel had been drifted towards land and when it reached a position about 10 nautical miles offshore moving towards Stadtlandet, Norway at a speed of approximately 1.5 knots the Norwegian authorities decided they could no longer wait for the weather to improve before acting.

“We are therefore taking government action now so that we have the opportunity to tow the casualty,” said emergency director Hans Petter Mortensholm. “At the same time, we are preparing for a worst-case scenario with a grounding. The region has particularly vulnerable natural areas, and we do not want them to be exposed to the strain of an oil spill.”

This morning, the Norwegian helicopters had overflown the area making an inspection and planning efforts to airlift a salvage crew aboard the ship. They reported that the weather had calmed down overnight with seas now running 6 to 8 meters (previously they were above 15 meters) and the winds were between a light to stiff gale. There were also snow showers in the area.

The tugs BB Ocean and Normand Drott operated by Smit Salvage also arrived at the casualty early on Wednesday and were standing by to attach a tow line. The plan was for the helicopter to hoist a four-person salvage crew to the deck of the Eemslift Hendrika where they would secure the tow line. The tugs will then reposition the ship into sheltered waters.

Due to the weather in the area around the Eemslift Hendrika, the Norwegian authorities and salvage team decided at mid-day to postpone the effort to get a crew aboard until Thursday. “Life and health are always the first priority during an incident like this, and it must be safe to carry out the rescue,” said Mortensholm. At the time, the Norwegian Coastal Authority reported that driftway calculations showed that the danger of the ship running aground was small, and with better weather expected on Thursday they believed it was more likely that the action could be carried out successfully.

The change in the drift calculations forced the teams to undertake the emergency efforts. The salvage crew was successfully airlifted to the vessel. They were able to attach the tow to the bow of the Eemslift Hendrika. The tug Normand Drott was beginning to gently turn the vessel around and planning to proceed into port escorted by the Norwegian Coast Guard.

Separately, the Norwegian authorities also located the service vessel which fell off the Eemslift Hendrika. It remains afloat several miles from the lift-vessel also drifting in the storm.