The Environmental Justice Foundation (EJF) has published a report from a Chinese tuna longliner where four crew reportedly died after being denied medical care.

The Indonesian crewmembers who raised the alarm also reported other serious human rights abuses such as physical violence and 18 hour working days as well as rampant illegal fishing.

The EJF and the Advocates for Public Interest Law (APIL) are calling for an immediate investigation into the fleet of vessels, which continue to operate in the Western Pacific Ocean.

Survivors from the vessel report that the victims all suffered from swelling, chest pain and breathing difficulties for weeks. Vessel captains allegedly refused to go to port to access appropriate medical care. Crew have connected the deaths to the poor quality of water provided on the vessels, however no autopsies were conducted.

The three crewmembers who died on their vessels were quickly buried at sea on the same day they died, despite contracts requiring vessel owners to repatriate bodies. The fourth crewmember died while in quarantine after arriving in Korea. He also did not receive medical care despite complaining of the same symptoms for two months, claim the crewmen who contacted EJF.

The crewmen allege that physical violence was committed by senior Chinese crewmembers against at least two Indonesian workers. They were made to work for 18 hours a day, and in some cases two days continuously without rest. The vessels remained at sea for over a year without calling at port. Indonesian crew reported that they were made to drink salty drinking water, while Chinese crew were given clean bottled water.

These reports came from Indonesian crewmembers originally from Long Xing 629 now in Korea, where they were interviewed by lawyers from APIL.

According to their contracts, most of the crew had agreed to work for a monthly salary of $300. Instead, many were paid $42 per month, and the wage was subject to further deductions including recruitment fees and security deposits, meaning some were ultimately paid less than $300 for the entire year. The first three months of wages were withheld to pay deductions.

In addition to violating their employment contracts, these payment practices are indicators of forced labor, says EJF. The passports of all crew members were reportedly confiscated by the captain of at least one vessel when crew embarked at the start of their contract.

The crew from the Long Xing 629 also reported industrial-scale illegal fishing and provided photographs and film showing shark finning of suspected critically endangered species. Despite the vessels being registered as tuna longliners, the workers stated that they targeted sharks using specific fishing gear with which they caught more than 20 animals a day, mounting to at least 16 boxes full of shark fins (each box weighing 45kg) when they left the vessel. Though China does not have rules prohibiting shark finning, the practice is in violation of measures set by the regional body that manages the Western Central Pacific Ocean.

Photographs provided by the crew suggest that some of the sharks finned were endangered and critically endangered, including Hammerhead sharks and Oceanic White Tips. Crew report that shark fins were boxed and trans-shipped between vessels to be brought to port for sale. 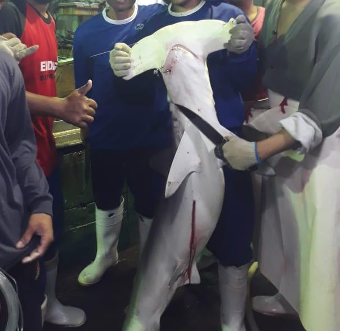 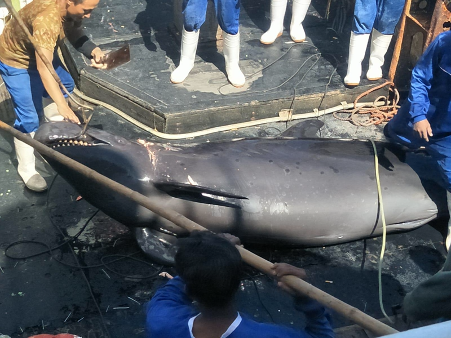 APIL and EJF are calling for an urgent investigation by Chinese and international authorities into the conduct of the fleet of vessels. APIL’s Attorney JongChul Kim said: “The severe labor exploitation we witness in this case is only the tip of the iceberg. We must understand the structural and contractual mechanisms that prevents these people from leaving their job and forces them to work, even when they face extremely serious illnesses and gross human rights abuses. It constitutes human trafficking and forced labor. This is a textbook example of human trafficking that is closely related to illegal fishing”

EJF’s Executive Director Steve Trent said: “This shocking case is another urgent reminder that change is needed in the global seafood sector. In an effort to maintain profits amid declining fish populations, unscrupulous operators are resorting to human rights abuses and decline crew basic medical care. These are possible because large parts of the global fishing industry operate in the shadows, away from government and public scrutiny. We need a radical move toward transparency in fisheries, for the sake not only of the marine ecosystems but also the people who depend on the ocean for food and livelihoods.”