In the race to develop the infrastructure necessary to make hydrogen a viable and economical fuel, Dutch C-Job Naval Architects has joined with LH2 Europe, a start-up company in the Netherlands seeking to create the supply chain from production through delivery to the end-user for hydrogen. The companies have developed a new class of liquid hydrogen tanker which they say “will revolutionize the renewable energy market in Europe.”

LH2 plans to produce hydrogen from renewable energy including solar and wind power on the east coast of Scotland. However, the missing piece in the company’s vision is the transport capabilities to move the hydrogen from Scotland to Germany where they plan to distribute it to industrial customers.

“We plan to initially deliver 100 tons per day (t/d) of green hydrogen and ramp up production to 300 t/d within three years, depending on demand,” says Dr. Peter Wells, CEO of LH2 Europe. However, he explains, “Current vessels in operation are not able to deliver hydrogen at the scale we expect will be required to meet the needs of the market. This tanker design is a key step in providing the infrastructure to make that clean energy future a reality.” 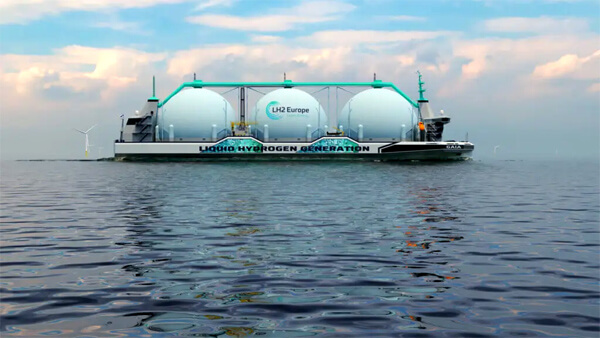 C-Job Naval Architects worked in collaboration with LH2 Europe to design a new class of liquid hydrogen tanker designed to meet the challenges of transporting hydrogen between Scotland, Germany, and potentially other parts of Europe. LH2 highlights that liquid hydrogen is the lowest cost and environmentally the safest option to transport hydrogen while saying that alternative long-distance bulk transport options, Liquid Organic Hydrogen Carriers and ammonia, are toxic and can cause damage to the environment.

C-Job developed the initial design for the vessel which looks like a barge, electing a moderate size compared to some of the competing designs for the emerging hydrogen sector. The C-Job concept is for a 462-foot-long vessel that would have a storage capacity of 37,500 cubic meters. By comparison, Kawasaki is developing a vessel with four times the capacity, 160,000 cbm, for long-distance ocean transport.

“Liquid hydrogen provides unique challenges in ship design and engineering,” explains Job Volwater, CCO at C-Job. “As a comparison, LNG tankers use ballast water to compensate for the loss of weight following delivery to ensure enough draft. As liquid hydrogen is high in volume but 20 times lighter than LNG, this required a unique solution. We have created a trapezium-shaped hull design which creates enough deck space to fit the tanks without the need for ballast.” 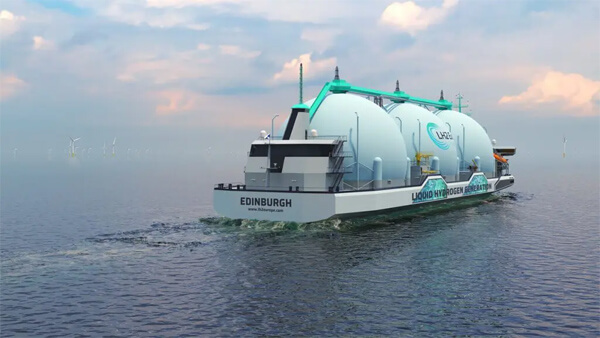 The vessel concept developed by C-Job would be powered by hydrogen fuel cells and equipped with three liquid hydrogen storage tanks each with a capacity of 12,500 cbm, which according to the companies would be enough to refuel 400,000 medium-sized hydrogen cars or 20,000 heavy trucks. The vessel would have 5,000 kWe of installed power providing the ability to operate at 14 knots with a crew of 14.

According to C-Job, another advantage of their concept is that the tanks will have a much lower boil-off than those currently used in the maritime industry. The limited remaining boil off will be captured and directly utilized in hydrogen fuel cells, providing power to the vessel's propulsion systems, resulting in emissions of water only.  The vessel itself will have zero greenhouse gas emissions during operations.

The ship is expected to be ready and commissioned six months before the first delivery of hydrogen in 2027. LH2 expects to rapidly develop the market from Scotland and then in the second phase plans to expand to supply from Spain and Portugal as the market in NW Europe develops.