In a strange twist to yesterday’s dramatic sea rescue of the crew from a drifting bulker during a raging storm, Dutch authorities are now detaining the captain and chief mate from the Julietta D. The vessel was secured by a salvage crew from Boskalis and brought to port, but the investigation is questioning the actions of the captain for leaving the vessel.

The Coastguard of the Netherlands reports that it responded to a call received from the 37,200 dwt bulker requesting assistance and a spokesperson told the Dutch news outlet NOS that the Coastguard in those situations does not question the captain’s judgment that there is an emergency. The Maltese-flagged bulker reported that its anchor chain had parted causing the vessel to hit an anchored chemical tanker creating a small hole in the hull. They were told that the ship was drifting out of control in the storm where winds were gusting up to 75 mph and the seas were running 16 to 20 feet.

Two Dutch helicopters along with lifeboats of the Royal Dutch Rescue Society (KNRM) were dispatched into the storm during. They also requested assistance from the Belgian Coast Guard, and they were able to locate the bulker between 15 and 20 miles off the coast. An airlift took place removing the 18 crew members including the captain and chief mate from the vessel.

Dutch media reports that last night the police detained the captain and chief mate as part of an investigation. They are reporting that the authorities are saying that the captain and mate should have remained aboard the vessel for as long as possible and only left if there was imminent danger. They are being investigated for prematurely abandoning the vessel that could then have gone aground on the Dutch coast.

The investigation will also look at the damage caused by the bulker when it hit the foundation for a transformer in the under construction Hollande Kust Zud wind farm. Tennet that is building the platforms for the Vattenfall project reports that there was no one on the transformer that was hit. Once the storm subsides, they are planning to inspect the site to see if there was any damage due to the impact.

The Julietta D remained afloat and adrift causing an offshore oil platform also to be abandoned before a joint salvage operation between Boskalis and Multraship got underway that same afternoon. The Sovereign, a large Boskalis tug, arrived on the scene about four hours after the ship was abandoned. Four salvors from Boskalis’ salvage division, SMIT Salvage, were airlifted onto the Julietta D by helicopter and were able to secure a towline to prevent the vessel from going aground. The Julietta D was pulled further out to sea as a precaution.

A second tug, the seagoing Multratug 18 operated by Multraship also arrived and secured a line, but due to the extreme wave height, the connection did not hold. Dutch media are saying the Coastguard reported that one person on the tug and a second on one of the KNRM’s lifeboats both received minor injuries during the attempt to secure the second line. The Multratug 18 remained on stand-by overnight to assist. A second large Boskalis tug, the Manta, loaded with salvage equipment and additional personnel, was also sent to the bulker and at sunrise today the Multratug 18 was able to attach a stern line to provide course guidance during the tow. The tugs were then able to bring the Julietta D to Rotterdam as the wind reduced and the waves were lower.

The tanker Pechora Star that was hit by the Julietta D remained at anchor and moored in the port of Amsterdam on Tuesday morning under its own power.

The German shipping company that owns the Julietta D thanked everyone involved for their efforts and promised to cooperate fully with the investigation. 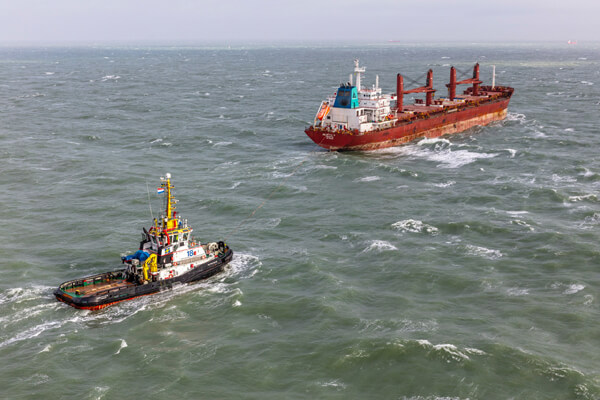