Disney Cruise Line took delivery on its new cruise ship the Disney Wish on Thursday in Bremerhaven, Germany. The ship, which is the first new cruise ship for the line in a decade departed yesterday to start its repositioning to Port Canaveral, Florida where it is due to arrive on June 20 before its maiden voyage.

At around 144,000 GT, the Disney Wish is slightly larger than the Disney Dream and the Disney Fantasy, which were delivered by Meyer Werft in 2011 and 2012. Delayed six months by the pandemic, she is the first of three cruise ships Meyer is building for Disney with the delivery of the sisterships scheduled for 2024 and 2025.

Earlier this week, the Disney Wish sailed a magical route in the shape of one of our favorite pals, Mickey Mouse! This 94 nautical mile path was part of sea trials, a critical component of testing our newest ship at sea. ???? #DisneyWish pic.twitter.com/VwSaa6CX4e

“Today, the construction of such complex and large units is an extreme challenge," said Jan Meyer, Managing Director of Meyer Werft. “Against this background, we are very pleased that we were able to hand over the Disney Wish with its many innovations for an immersive passenger experience with many loving details and numerous environmentally friendly solutions to the shipping company.”

Measuring 1,119 feet in length the Disney Wish has 1,250 cabins with accommodations for more than 2,500 passengers, making her the largest of the cruise line’s five ships. She also includes new features including “the most complex and innovative entertainment facilities in the cruise industry,” according to Meyer. Passenger amenities include areas themed to Disney’s Star Wars and Marvel franchises as well as a passenger suite located in the forward funnel. Disney also used its skills in building attractions to create a 750-foot-long water ride.

The cruise ship departed Meyer’s building hall in Papenburg, Germany on March 31 traveling to Eemshaven in the Netherlands to complete its final fitting out. In late May it completed sea trials and this week transferred to Bremerhaven, Germany for the handover ceremony completed on June 9. Disney plans a series of celebrations once the cruise ship arrived in Florida, including a christening ceremony before she enters service on July 14. 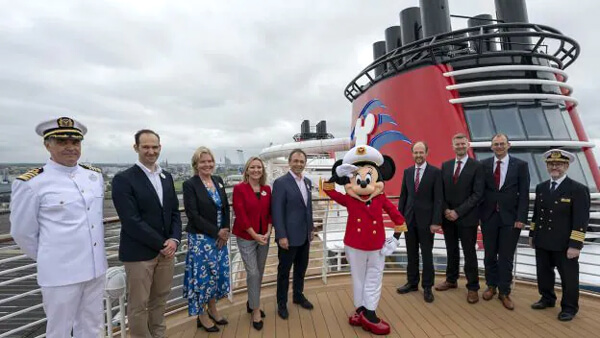