China’s Guangzhou Shipyard International recently completed construction on the first of two large RoPax ferries for Scandinavia’s DFDS. The ferries will be the largest RoPax in the company’s fleet and also mark the first newbuilt passenger vessel contracted by DFDS in nearly 40 years.

The 54,900 gross ton Aura Seaways, and her sister ship still under construction at the Nansha shipyard in China, are also among the most environmentally friendly and efficient ferries. The design fulfills the new standards of EEDI (Energy Efficiency Design Index), and the CO2 emissions per trailer are projected to be more than 20 percent lower than on DFDS’s vessels currently operating on the Baltic routes. The ships are equipped with scrubbers and their hulls, which are ice 1C rated, were designed to increase the efficiency of the operations.

With 4,500 lane meters, the Aura Seaways will become DFDS’s largest RoPax ferry in terms of cargo capacity. According to the group, her combined cargo/payload, fuel, ballast, and stores capacity gives her a deadweight tonnage of approximately 12,750 tons. She can carry almost three times more cargo and payload compared to the company’s last newbuild passenger vessel the Scandinavia, which was delivered in 1982.

In terms of passenger capacity, the new RoPax can accommodate up to 690 passengers with 250 passenger cabins. Her Chinese builders noted that the passenger facilities, which include bars, restaurants, and various entertainment facilities, were built to the highest standards with 90 percent of the material coming domestically from China. 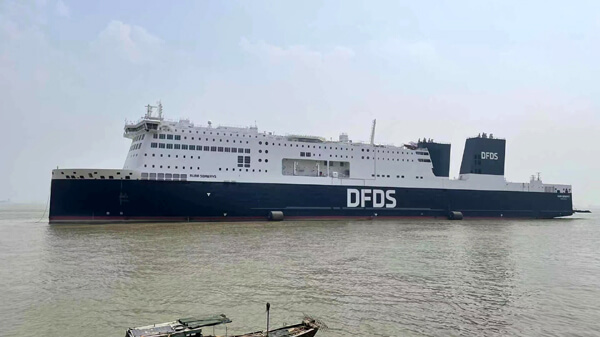 During construction in China (DFDS)

DFDS said when it ordered the two vessels at the beginning of 2018, that it was investing nearly $300 million for the two vessels as part of a program to modernize and expand its fleet on the Baltic. The new ship is intended to operate on routes between Sweden, Lithuania, and Germany. Delivery is approximately six months behind schedule due to the effects of the pandemic with the second ferry expected for delivery during the first half of 2022.

Each of the ferries is approximately 755 feet long and has a 102-foot beam. They are outfitted with stern ramps and internal ramps for the movement of vehicles and cargo. They will operate with a crew of approximately 62 and will have a service speed of 23 knots.

For Guangzhou Shipyard the two RoPax represent an advancement for the yard in the international market with high-quality vessels. The yard also has orders for two ferries for Italy's Moby and another for Britain's P&O Ferries. 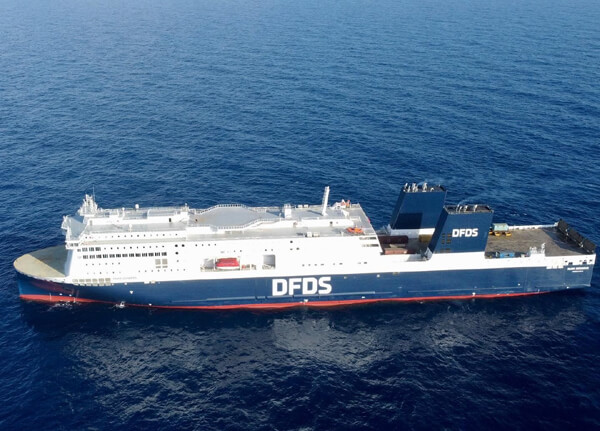