Wind-assisted propulsion continues to draw attention with a broad range of companies working to develop modern commercial vessels that incorporate new technologies to harness the wind. Demonstrating the feasibility of using wind-propelled wing-sails on a containership, French classification society Bureau Veritas validated the design for a 1,800 TEU containership incorporating wing sails into its design.

The Approval in Principle (AiP) was awarded to a French company, Zéphyr & Borée, for its open-top 1,800 TEU containership. The design is for a 607-foot-long containership with five cargo holds, mostly open-top. It is the latest in a series of designs the company has developed for containerships equipped with sails as part of its efforts to develop low-carbon transport services.

“We are convinced that wind energy will play an important role in the years to come to decarbonize ships’ propulsion,” says Nils Joyeux, CEO at Zéphyr & Borée. “The integration of sails on container ships is an important technical challenge on which we are working hard at Zéphyr & Borée. We are delighted to collaborate with BV on this project, which represents a key milestone by demonstrating the viability of wing-sails as a wind propulsion solution for container ships. We intend to continue our work with maritime stakeholders to offer wind propulsion solutions that are economically viable and make a tangible difference for the sector.”

The vessel’s propulsion system will be assisted by eight sails provided by CWS (Computed Wing Sails). The design is a thick, asymmetrical wing-sail that can be steered to catch port and starboard winds, and adjusts itself automatically depending on the wind conditions to ensure optimal savings. The sails would provide additional propulsion force to supplement Tier III compliant engines. The vessel would also be equipped with shaft generators and a heat recovery system that minimizes fuel consumption.

“Wind, even if it is not always available, is a serious option to help decarbonize the shipping industry,” said Laurent Leblanc, Senior Vice President Technical & Operations at Bureau Veritas Marine & Offshore. “Wind propulsion systems can play a significant role by providing substantial propulsive energy. With this AiP, we are pleased to demonstrate the technology can be applied to containerships, which represent 17.5 percent of the global fleet (in tonnage).”

BV was involved from the very early stage of the design. The main design principles were reviewed to ensure the feasibility of the concept and identify any obstacles. The AiP confirms the design’s compliance with the most recent BV notations. Bureau Veritas has released classification rules that provide a framework for wind propulsion systems (WPS) addressing safety, design, installation, and operations, including survey regimes and maintenance requirements.

Zéphyr & Borée is developing several wind-assisted designs, including the Canopée, which it bills as the world's first sailing cargo ship. The vessel, which was designed for the transport needs of the Ariane 6 launcher in the European space program, is 397 feet long equipped with four articulated wing-sails each with approximately 3,900 square feet of sail area. They estimate when the ship enters service in 2022, the sails will reduce fuel consumption by 25 percent with the vessel operating at a speed of 16 knots. The Canopée is designed to transport the launcher and components from Europe to the launch site in French Guiana. 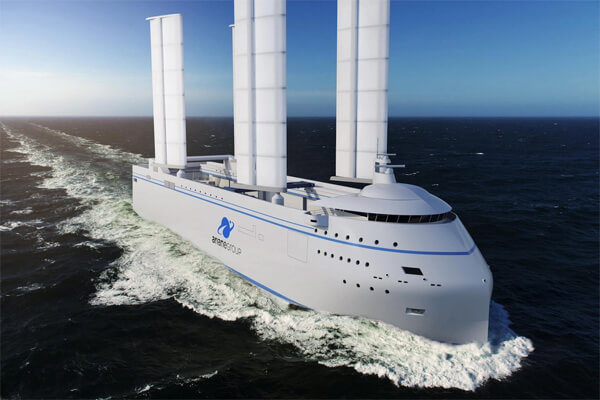