Every year, customs officials at American ports face an unusual smuggling challenge: less-than-law-abiding shippers in China who attempt to send misdeclared mitten crabs to American customers. At the Port of Cincinnati, U.S. Customs and Border Protection (CBP) officers and officials with the U.S. Fish and Wildlife Service (FWS)  have intercepted 51 shipments of the vigorous, invasive crab species over the past four months. The seizures in Cincinnati amount to roughly 3,700 live crabs weighing a total of 3,400 pounds. 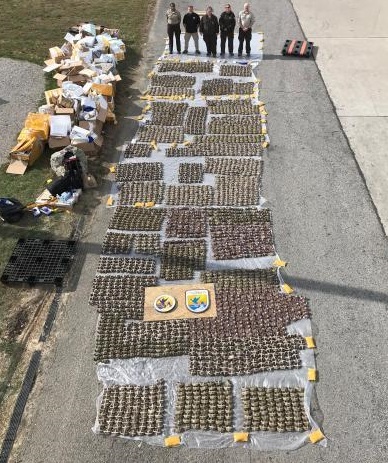 Nationwide, CBP  and FWS inspectors refused entry to more than 15,000 mitten crabs since September. The Port of Cincinnati saw the highest volume of the smuggled crustaceans, with the second largest number coming through the Los Angeles ports of entry.

According to CBP, the shipments originated in China and in Chinese-administered Hong Kong. They were destined for residences and businesses in multiple U.S. states, although most were headed to New York. All were falsely listed on cargo manifests as tools or clothing. CBP referred the live crabs to FWS, and all the violations are currently under review.

Mitten crabs are a seasonal delicacy in China, where they are consumed during the peak of their maturity - the ninth and tenth months of the lunar calendar (roughly late September through the end of December). They retail for about $50 per crab in the United States, creating a profit motive for smuggling. Their exceptional ability to outcompete native species - like the blue crab, a native of the U.S. Eastern Seaboard - has earned them a place on the Invasive Species Specialist Group’s list of “100 of the World’s Worst Invasive Alien Species." They have been found in the Chesapeake Bay, the Hudson River, Delaware Bay and San Francisco Bay, and they are established in European waters as well.

Every fall, Chinese shippers attempt to import live mitten crabs from Asia through U.S. cargo and mail facilities, where CBP and and FWS stand ready and waiting to catch them. It is illegal to import mitten crabs and other invasive wildlife into the United States without a permit.

“As a unified border agency, CBP is committed to a fully integrated approach toward international security,” said Cincinnati CBP supervisory agriculture specialist Barbara Hassan. “In this case, we worked closely with FWS to stop a serious threat to our economy and ecology.