Construction is beginning on the first of a new generation of short sea ships designed to improve operating efficiency and environmental performance. The first of the vessels, designed by the Dutch Conoship International Projects, is now under construction in Turkey to be followed by five additional vessels to be built in the Netherlands. They are expected to enter service in 2023 and 2024.

“We are very proud to contribute with these ultra-fuel-efficient cargo vessels to the zero-emissions target set by the International Maritime Organization (IMO) for 2050,” says Maart Sickler, Director of Conoship International Projects. “Our new design concept looks set to give the industry a boost, while also reducing CO2 emissions from shipping.”

The ceremonial start of construction for the first of the vessels, a 3,600 dwt general cargo ship, took place on November 24 at the Gelibolu Shipyard in Turkey. This vessel design is for a diesel-electric general cargo vessel suited for sea-river operations. According to Conoship, the vessel can be considered the new standard for low-air draught sea-river coasters.

The propulsion system consists of a diesel-electric plant and a bow thruster for maneuverability. They used a patented stern design along with an enlarged propeller and optimized hull lines to improve the vessel’s performance. It will be approximately 289 feet long with a capacity of 180,000 cubic feet of cargo. It will operate at 10 knots with a crew of seven.

The EEDI as calculated for a diesel-driven vessel is already below the Phase 3 requirements. Further improving the design, it is ready for wind-assisted propulsion. Conoship estimates that with two foils the vessel will reduce fuel consumption by about 10 percent depending on the routes. 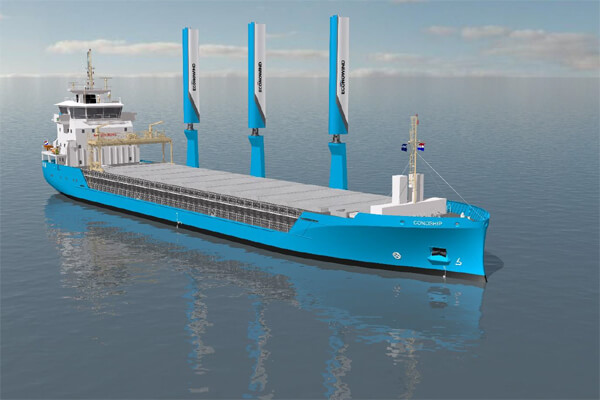 Conoship is also developing a 5,800 dwt version of the design (Conoship)

Conoship also took into account during the conceptual design process future alternatives. “For example, take off the generators and replace them with a methanol power generator set and then put in methanol tanks as well, or take them off completely and put on liquid hydrogen tanks and fuel cells,” explains Jan Jaap Nieuwenhuis, Managing Director at Conoship International.

The first vessel is due to enter service in 2023 in Europe. Two more of the 3,600 dwt diesel-electric vessels will also be built by the Holland Shipyards Group in the Netherlands. In addition, Conoship reports that an undisclosed owner is also building three enlarged versions, tween deck fitted, 3,800 dwt vessels. These five vessels are due to enter service in 2024. Conoship is also preparing to introduce a 5,800 dwt version of the market.