Concept to Produce Hydrogen on LNG Ships to Overcome Obstacles

A group of leading companies from across the maritime industry are developing a solution that they believe will make hydrogen a viable option without the need for extensive infrastructure investments. They are proposing making hydrogen from LNG aboard ships, which when combined with carbon capture, would exceed the IMO 2050 target for a 70 percent reduction in carbon intensity.

Wärtsilä, together with class society RINA, ABB, Helbio - a subsidiary of Metacon AB, the Liberian Registry, and an energy major, have joined forces in the effort to deliver a solution with hydrogen as fuel. They believe that their concept offers the shipping industry a pathway to low-carbon operations within a reasonable time frame.

The concept is based on combining LNG with steam to produce hydrogen and CO2. The hydrogen would be used in a mix with natural gas in internal combustion engines or fuel cells, thus eliminating the need for hydrogen to be stored onboard. The CO2 would be liquefied using the cryogenic stream of LNG that would be used as fuel anyway, and later disposed of ashore for carbon storage. Tankers, they noted, could also use the stored CO2 as inert gas during discharge. 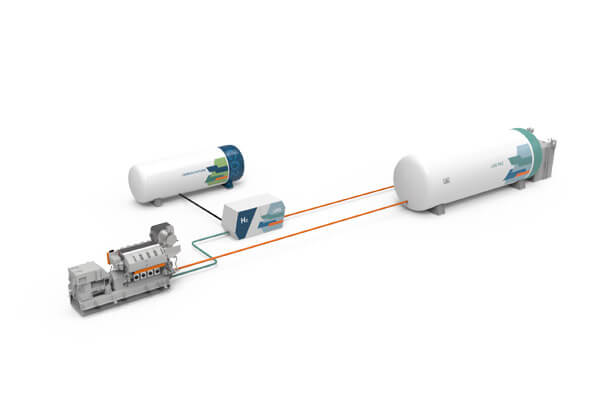 According to the companies, difficulties and cost considerations regarding the production, distribution, and onboard storage of hydrogen have so far limited the sector’s interest in the direct use of hydrogen as a marine fuel. However, by producing hydrogen on board, and using readily available LNG, the solution becomes far more viable and in a much faster time than would otherwise be possible.

As they explain the concept, the necessary equipment can easily be fitted on the deck of a commercial vessel. Only LNG bunkering will be required and, by progressively increasing the production of hydrogen, the consumption of fossil methane and associated methane slip will be reduced at the same rate.

While the aim is to have a scalable and sustainable solution that will exceed IMO targets, they also believe the concept will support the marine sector’s gradual transition from LNG to hydrogen, without any major adjustments to a vessel’s onboard technologies.

Wärtsilä and ABB will support the application of hydrogen in powering internal combustion engines and fuel cells, while Helbio will provide the technology and manufacturing of gas reformers. RINA and the Liberian Registry will provide advice and guidance on the application of rules and regulations for novel concept alternative designs, based on Hazid/Hazop analyses, as well as specific rules for this kind of arrangement.