Coastguardsmen Honored for Heroic Rescue Near Port of Virginia

On Wednesday, four U.S. Coast Guard boat crew members received awards for their actions during a search and rescue case and reunited with two of the four boat crash survivors during a ceremony at Coast Guard Station Little Creek in Virginia Beach, just outside the Port of Virginia.

Petty Officer 1st Class Nathan Reynolds, a coxswain at the station, Petty Officer 3rd Class Parker Bohannon, a machinery technician at the station, and Seamen Daniel Brennes and Loren Greenlund received Coast Guard Commendation Medals for their response to a boat crash on the Little Creek jetty on Dec. 23, 2018.

When they were alerted that a 23-foot boat had allided with the jetty, the crew launched a response boat and arrived on scene within 17 minutes of the initial call for help. They discovered that all four people aboard the vessel had sustained serious injuries, including internal bleeding, facial trauma and broken bones. 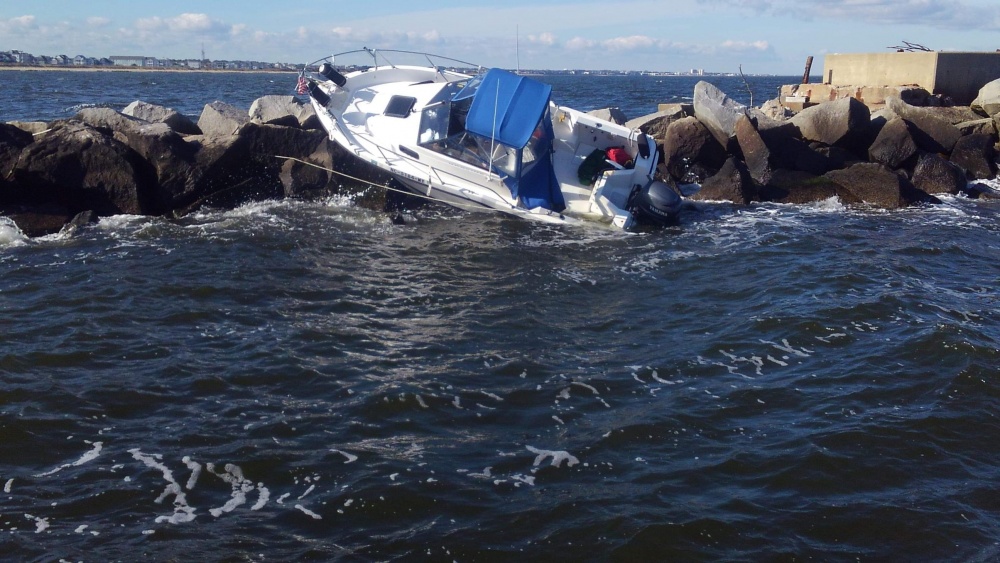 The crew members traversed the slippery jetty rocks and formed a human chain in the 44-degree water to remove the four injured people from the boat, which was suspended on the rocks at a 70-degree pitch. Reynolds directed his crew to secure the damaged boat to large rocks with mooring lines while Greenlund, a certified EMT, triaged the injured boaters and fastened each to a Stokes litter to transfer them off the jetty.

“I couldn’t have put together a better crew for this case,” said Reynolds. “Greenlund is the only EMT at the entire station, Brennes was previously a medic in the Marines, and Bohannon is one of the most seasoned boat engineers at the unit.”

The crew transferred the injured boaters to Virginia Beach EMS, who had to resuscitate Robert McCall, the owner and operator of the boat. “It’s just unbelievable how it happened and how lucky we were to have those guys,” said McCall.

McCall and Clare Becht, another of the four survivors, met with the Station Little Creek crew at the ceremony to thank them for their actions that night. “I feel very grateful that I had the opportunity to see them and thank them,” Becht said. “It kind of makes you want to cry. I don’t know whether it’s tears of joy or relief.”

There’s rising concern about the prospect of a major military crisis erupting across the Taiwan Strait as a result of China’s intention to force Taiwan to unify with the mainland. President Xi Jinping suggested in early 2019 that China must be and will be reunified, and noted, "It is a historical conclusion drawn over the 70 years of the development of cross-Strait relations, and a must for the great rejuvenation of the Chinese nation in the new era." He went...

One of America's most important energy pipelines shut down on Friday after a cyberattack crippled its computer systems, according to the operator. The Colonial Pipeline stretches all the way from Texas to New Jersey, and it distributes vital supplies of petroleum products like diesel, gasoline and jet fuel to every state in between. It carries about 2.5 million barrels of product per day - more than 10 percent of the nation's entire daily petroleum consumption and about half of the...

To meet market and customer demand, DESMI has developed two new Ballast Water Management Systems (BWMS) covering bulker solutions and ships sailing in or primarily in IMO waters. The new systems are CompactClean Bulker and CompactClean OptIMO. These new systems join the DESMI portfolio of BWMS alongside the well-known CompactClean BWMS. “Not all ships are engaged in global trade but rather in regional or domestic trade, and as such a significant part of the world’s fleet will never, or only...

[By Dr. Salvatore R. Mercogliano] The grounding of MV Ever Given from March 23 to March 29, 2021 captured the world’s attention. Many people asked, how could such a modern and large vessel find itself with its bow rammed into Asia, its stern aground on Africa, and its midship astride one of the major maritime chokepoints in the world? The world was also entertained with thousands of images from the little digger scratching away at the sand along the ship’s bow, to...