China is highlighting its progress in the construction of the new generation of ultra-large container ships. While industry analysts are focusing on the current overcapacity in container shipping, the beginning of the wave of new containerships ordered primarily in 2021 is starting to take shape.

Recently, two new ultra-large 24,000 TEU vessels progressed at the Chinese yards, which are leading in the development of the new behemoths for MSC, OOCL, and Evergreen. China State Shipbuilding Corporation is highlighting the diversification of the work by developing the expertise at additional divisions of the company. Two of COSCO’s joint venture shipyards also simultaneously floated out the first of a new class of 16,000 TEU ships for MSC which are being called the most environmentally advanced containerships yet built.

In the first days of this month, Dalian Shipbuilding and Guangzhou Shipbuilding International, each floated a new vessel in MSC’s new class of 16,000 TEU boxships. According to the reports from China, the order which was placed in March 2021 was valued at approximately $1.5 billion making it the largest single containership order. The contract calls for a total of 13 vessels due for delivery between 2023 and 2025.

The design for the new class was developed by the China Shipbuilding Group. At 1,200 feet in length and a 167-foot beam, the vessels are about 40 feet shorter than the largest 24,000 TEU vessels. CSSC boasts that the vessels incorporate new concepts in environmental protection, carbon reduction, and a drag reducing design. They are powered with WinGD engines and hybrid scrubbers but are also designed LNG-ready. They are outfitted with air lubrication and a shaft generator. DSIC which is building part of the call reports its energy efficiency design index (EEDI) value is 57 percent lower than the baseline. 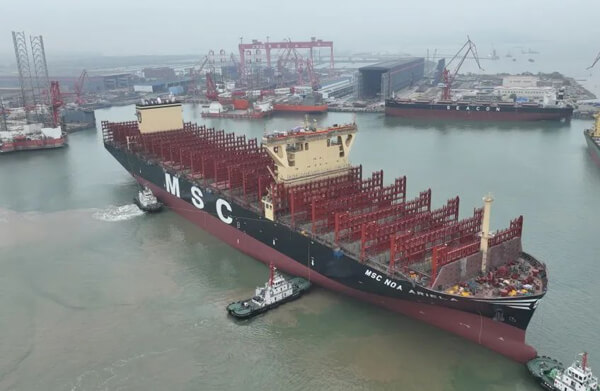 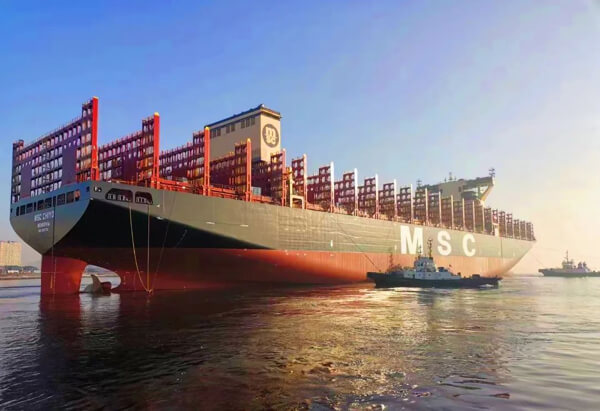 Design elements were incorporated to improve the EEDI value (DSIC)

DSIC which is located in the northernmost part of China floated out the MSC Chiyo as the first vessel for its portion of the order. Guangzhou Shipbuilding they noted located on the opposite south side of the country is developing its experience with ultra-large ships floating out the MSC Noa Ariel.

COSCO Dalian Kawasaki (DACKS) is also marking its entry into the ultra-large segment floating on January 9 its first 24,000 TEU containership. The vessel measures 1,312 feet in length like the other ultra-large vessels and is part of an order also being built by Nantong COSCO KHI Ship Engineering Co. (NACKS) for OOCL. DACKS reports it designed this vessel which is being classed by ABS.

Through a low-resistance linear optimization process, the vessel has the best environmental profile. Its energy efficiency index (EEDI) also exceeds the benchmark value by more than 50 percent, meeting the requirements of EEDI Phase 3. The design features a newly developed energy-saving bulbous bow, propeller front shroud, and other energy-saving devices including the world's largest capacity high-efficiency permanent magnet shaft generator system which saves energy and provides a boost to operations. The application of new technologies includes an intelligent safety management system that monitors and predicts hull conditions for the entire life cycle of the vessel. The design also employs the first 45-foot container double lashing scheme which will improve the economy of the ship's operations.

CSSC is highlighting in addition to expanding the experience with building ultra-large vessels, they have improved the material preparation, process implementation, and production process. Hudong-Zhonghua Shipbuilding learned from the construction of the first two 24,000 TEU ships of Evergreen, the Ever Alot and Ever Aria, and used that to accelerate the production time and delivery of Ever Acme by four months. The ship which was scheduled for delivery in the second quarter of 2023, was delivered on December 29 and immediately departed for Shanghai and its maiden voyage. 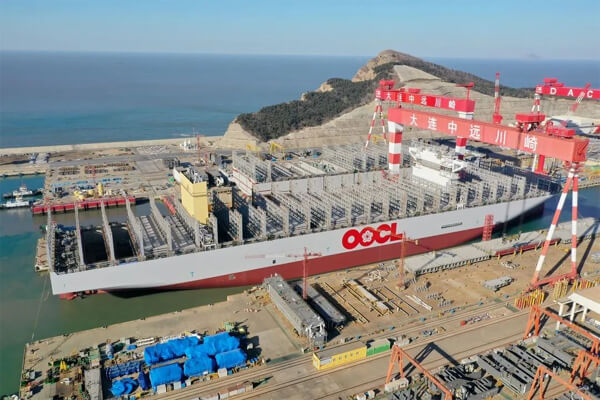 COSCO's DACKS floated out its first 24,000 TEU containership being built for OOCL (DACKS)