In an elaborate ceremony full of pomp and ceremony, CSSC floated out China's first fully domestically designed aircraft carrier, the Fujian. Military experts are pointing out that it is a major achievement as it will be the first carrier able to rival the United States supercarriers and a key part of China’s global ambitions.

Many of the details of the Fujian are closely guarded secrets, but Chinese media today referred to the vessel as being 80,000 tons displacement. U.S. Defense Department officials reported to the U.S. Congress that they believed the vessel could be larger approaching 100,000 tons. Its length is estimated at 984 feet.

China is also celebrating the carrier as their first catapult-type aircraft carrier. China’s first two carriers built off of Soviet-era designs are both ramp carriers using a “ski-jump” to help planes get airborne. It is believed that China had originally designed the Fujian with an older-style steam ram system. The vessel however is being built with an electromagnetic-type system similar to the ones on U.S. carriers. Analysts point out that this will give the vessel capabilities to deploy a wider range of aircraft. 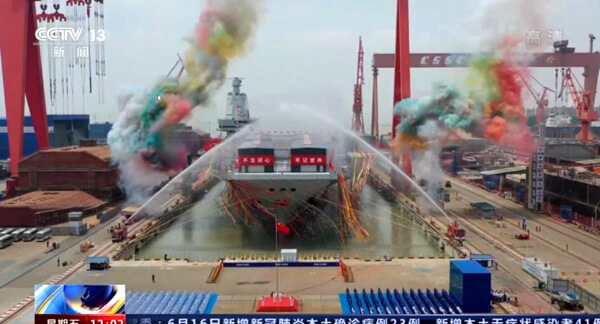 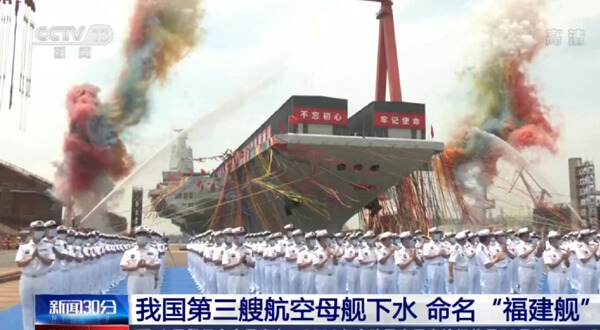 Pomp and ceremony during the launching ceremony (CSSC/Weibo)

Equipped with the latest weaponry and aircraft-launch technology, the Type 003 carrier is thought to be China’s latest attempt to rival the West’s capabilities and a key part in the Communist Party’s expansion efforts. President and party leader Xi Jinping, who is not believed to have attended today’s ceremonies, has placed a high priority over the last decade on modernizing and expanding China’s Navy. Analysts point out that with the completion of an aircraft carrier, China has now built all types of naval craft ranging from frigates and destroyers to assault ships and now aircraft carriers. U.S. Defense Department officials estimate that China currently has over 350 commissioned ships in its navy and is planning to reach as many as 450 ships by the end of the decade.

Experts believe that work began on the third carrier, now known as Fujian in possibly 2015 or 2016. It is being built at CSSC’s Jiangnan Shipyard in Shanghai, which also constructs merchant ships for foreign customers like CMA CGM and Evergreen.

During the ceremonies, in addition to the traditional champagne christening, there were blasts of air cannons with color displays and water sent arching over the ship. After the playing of the national anthem and patriotic songs, the carrier was backed from the drydock and positioned along one of the outfitting docks at the shipyard.

Chinese media reported in addition to completing the fitting out, the vessel will begin a series of trials. They pointed to mooring tests before sea trials. Experts predicted it would be at least six months till the vessel went to sea for the first time and also expect an extended period of testing for the launch systems and aircraft. They predicted it would likely be late 2023 or 2024 before the vessel begins testing with aircraft and likely 2025 before it will be declared fully operational.

China has not officially acknowledged rumors of a fourth carrier also under development. Speculation has been persistent about the next carrier with some suggesting it will both be larger and possibly nuclear powered.