China Merchants took delivery today on the first second-generation eco-friendly VLCC. The supertanker is the first to be fitted with four rigid sails as well as other energy improvements.

Built by Dalian Shipbuilding Industry Company (DSIC), the vessel which is named New Aden is also the 100 crude oil tanker built by the shipyard. The name of the vessel also celebrates the first ship of the fleet which was launched 150 years ago.

The new VLCC is 1,092 feet long and 300,000 dwt. The ship features four rigid wind sails. The sails are a technology developed by the shipyard using a composite material developed by Guangwei Composite Materials. Each is approximately 130 feet tall and nearly 13,000 square feet made of carbon fiber composite material. The sails are lifted and turned with a fully automatic system to maximize their efficiency. 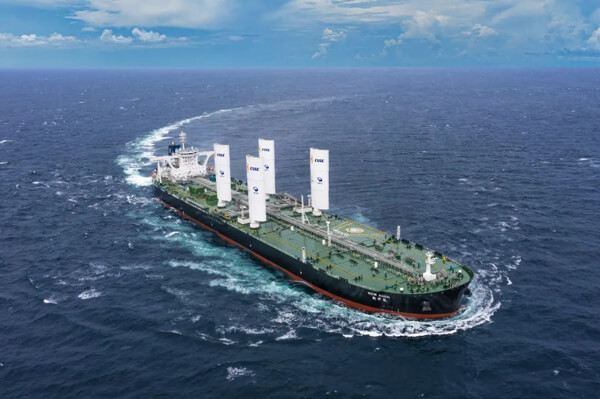 According to DSIC and its parent company CSSC, the vessel’s design was designed for operations between the Middle East and the Far East. “The New Aden pays more attention to the optimization of the ship's operating performance, reduces the ship's operating fuel consumption, and enhances the ship's sailing performance in wind and waves,” said CSSC. They estimate that the tanker in operation will achieve an annual fuel savings of 9.8 percent and more than 2,900 tons of carbon. The vessel is also fitted with the latest SOx and NOx technologies to reduce emissions, meeting the EEDI and EEXI standards.

The installation expands on China Merchants’ experience with using rigid sails. In 2018, DSIC fitted two rigid sails on a VLCC also being built for China Merchants. According to the shipyard, the new vessel is an expansion of their relationship dating back to 2007. DSIC has built more than 30 large vessels for China Merchants representing nearly nine million tons.

The companies also used the opportunity of the delivery of the new vessel to announce the first order for LNG carriers for DSIC. China Merchants Energy Shipping ordered two 175,00 cbm LNG carriers. The two vessels will be propelled by two low-speed LNG-fueled engines with a speed of 19.5 knots. The first two carriers will be delivered in 2026 and CMES has an option for four more vessels that would be delivered in 2026 and 2027.