Britain’s new polar research vessel, the RRS Sir David Attenborough, docked in Antarctica on December 17 a week after reaching the region on its maiden voyage. The much-maligned vessel, which received numerous reports in the British media due to cost overruns and construction delays, departed the U.K. in mid-November and will be conducting its research and resupply mission not returned home till June 2022.

The vessel, which gained international attention when the British voted to name it Boaty McBoatface, was handed over to the Natural Environment Research Council (NERC) late in 2020. She spent the last year undergoing additional outfitting and training for its crew as well as correcting some technical issues that appeared during the tests. After departing Harwick, England on November 16 and a brief stop in Portsmouth, she completed a three-and-a-half week transit to the Falkland Islands before officially entering Antarctica on December 13.

“The ship is a state-of-the-art research and logistics vessel, enabled by world-class infrastructure, that has been delivered by an amazing team of professional and technical experts from BAS and our industry partners,” says Jon Ager, Programme Director (AIMP), for the British Antarctic Survey which is operating the vessel.

Her first call in Antarctica is at Rothera Research Station, the UK’s largest Antarctic research station on the continent. She is transporting station personnel, food, fuel, and cargo for the resupply of Britain’s research programs. 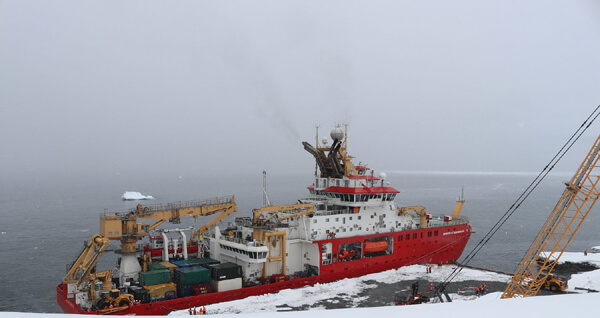 The RRS Sir David Attenborough’s arrival at Rothera Research Station also marks the first time the new purpose-built wharf has been used to berth the ship. The wharf which measures more than 240 feet was completed in 2020 by the Antarctic Infrastructure Modernization (AIMP). It enables Britain’s new polar research ship to berth safely and helps the station run more efficiently with a new crane to launch small science boats, a personnel gangway, and a floating pontoon to deploy scientific instruments.

The RRS Sir David Attenborough’s arrival also marks the start of the new construction season with activity on the Discovery Building for the third year in a row, a new state of the art, science, and operations facility for Rothera Research Station. Due to the harsh, cold Antarctic environment, construction can only take place during the Antarctic summer months. Over 50 members of a specialist construction team arrived last month and will work until April on erecting the main steel structure, installation of ground floor pre-cast concrete slabs, ground drainage, and site-wide services.

“Everyone on board is thrilled to arrive at Rothera for the first time,” said Will Whatley, Captain of the RRS Sir David Attenborough. “This is a really exciting and proud moment for us, and another huge milestone to have achieved. As we’ve traveled further South, we’ve had the chance to put the ship through its paces in Antarctic conditions and I’m pleased to report the ship has performed really well.”

After calling at Rothera, the RRS Sir David Attenborough will continue its mission South, making calls at Signy, King Edward Point, and Bird Island research stations, and heading to the Stange Ice Front for its ice trials. 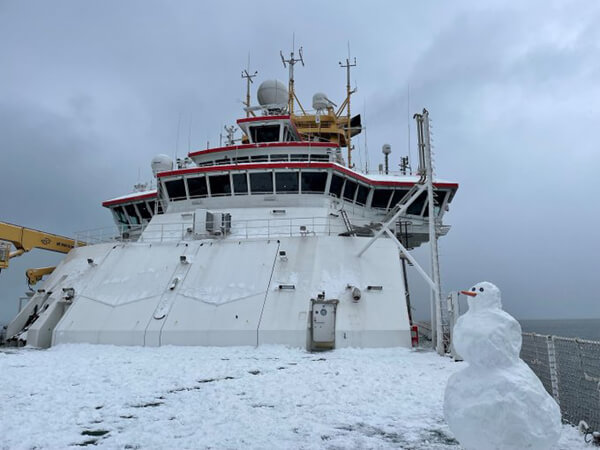