Total and its partners have taken the investment decision for the second phase of the Mero project (Libra block), located deep offshore, 180 kilometers off the coast of Rio de Janeiro, in the prolific pre-salt area of the Santos Basin in Brazil.

The Mero 2 FPSO will have a liquid treatment capacity of 180,000 barrels per day and is expected to start up by 2022.

“The decision to launch Mero 2 comes as a new milestone in this large-scale project that will develop the giant oil resources of the Mero field, estimated at three to four billion barrels,” declared Arnaud Breuillac, President Exploration & Production of Total. “The Libra Consortium can leverage the excellent productivity of the field to develop a major oil project with technical costs below 20 dollars per barrel and low breakeven.”

Once the full potential of the field is developed, production should reach more than 600,000 barrels per day. 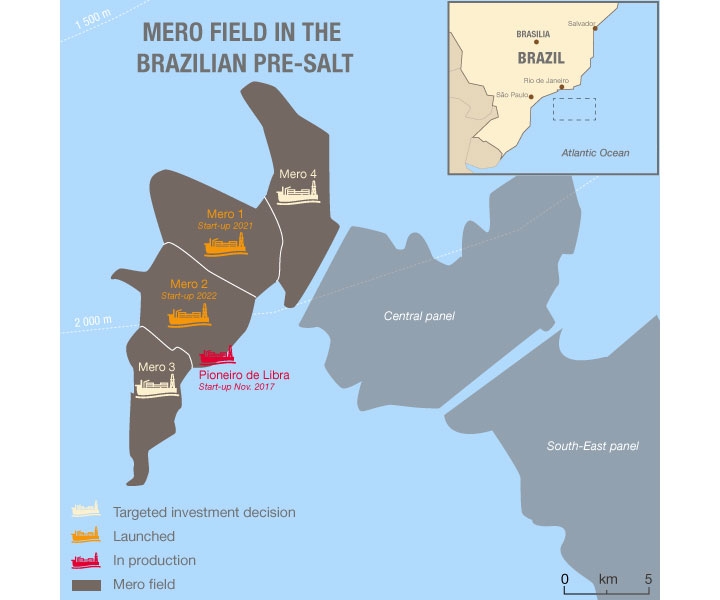 The decision follows the production start-up on the field in November 2017 with the Pioneiro de Libra FPSO, which has a capacity of 50,000 bopd, and the launch of the first phase of the project (Mero 1) approximately a month later.

The Mero 1 project, currently under development, is progressing as per plan with a start-up scheduled in 2021. Following the launch of Mero 2, the project is expected to add two further FPSOs of the same capacity.

As part of its Strategic Alliance with Petrobras, Total holds a 22.5 percent stake in the Iara concession area in Block BM-S-11A and a 45 percent stake as operator of Block BM-S-9A in the Lapa field concession, which came on stream in December 2016 via the 100,000 barrel per day capacity Cidade de Caraguatatuba FPSO. Additionally, Total and Petrobras are also implementing R&D projects on different topics such as artificial intelligence leading to efficiency gains with direct applications in Brazil.

Both companies have also extended the scope of their Strategic Alliance to renewable energy. In December 2018, Total Eren and Petrobras signed a binding agreement for the creation of a Joint Venture by July 31, 2019 to develop onshore projects in the solar and wind segments in Brazil.