BIMCO: Growth in Scrubber Installations Continuing Due to Fuel Price

The number of ships with scrubbers installed as a means of complying with the 2020 global sulfur cap has doubled since the regulations came into effect. Further, according to a new analysis from the shipping association BIMCO, the growth in the use of scrubbers is likely to increase driven by a stabilization of the price spread between high and low sulfur fuels.

New data from BIMCO shows that in the past 15 months the number of ships with scrubber installations increased from 2,011 as of January 1, 2020 to a current level of 3,935 vessels. Among the different types of vessels, crude oil tankers have led the way with nearly a quarter of all the tankers now fitted with scrubbers to remove sulfur oxides from their exhaust gasses. About one-in-six containerships also are fitted with scrubbers. Dry bulk carriers are lagging with just over 11 percent using scrubbers and the smallest adoption has come from product tankers where just over four percent now have scrubbers.

“There is a clear tendency that it is the large ships that burn most bunkers which have been preferred for scrubber installations. But it goes for all: as voyage costs are lowered, earnings are higher,” says Peter Sand, BIMCO’s Chief Shipping Analyst.

The economic considerations have been a key driver for shipowners considering how to comply with the IMO sulfur regulations. “From the get-go, the debate was all about the bunker price spread and therefore the choice between high-sulfur fuel oil (HSFO) and investing in a scrubber or using low-sulfur fuel oil (LSFO) to comply with the new sulfur regulation,” says Sand.

Further impacting the outlook were the wild swings in demand the oil market saw in 2020. Last year’s boom in segments of the shipping industry contributed to an overall five percent increase in total bunker sales and a further nearly three percent increase during the first two months of 2021 for bunker sales.

While the majority of ships converted to LSFO as a means of propulsion to be compliant with the IMO 2020 sulfur cap, BIMCO reports that there also was a strong increase in HSFO sales. Their data shows that HSFO was 17 percent of bunker sales at the beginning of 2020 rising to a quarter of total bunker sales in February 2021. 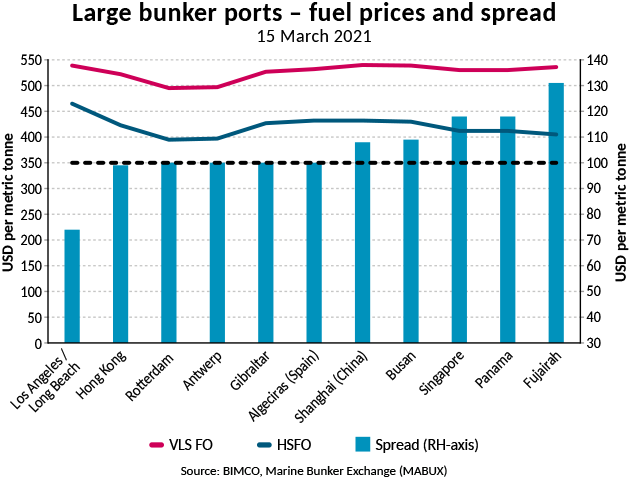 Before the implementation of the sulfur regulation, BIMCO says the then-watched MGO-HSFO spread hovered around $200 per MT, with the expectations that a new, lower spread would be established in the market. As the new standard for LSFO was established, BIMCO believes the pricing of the product also seems to have arrived at the next normal.

BIMCO’s analysis reports that there are variances in the pricing spread between the grades of fuel in the global market. Typically, the current spread is around $118 per MT as seen in Singapore, which is the largest bunker market. The lowest price spread between HSFO and LSFO is on the US West Coast while the largest spread is in the Middle East.

“As the bunker price spread now seems to have found a steady level slightly above $100 per MT, ship owners and investors are increasingly likely to order new ships with a scrubber pre-installed today, when compared to the sub-$100 spread of last year,” concludes Sand.