Australia has established an artificial reef at Exmouth in Western Australia - the largest purpose built reef habitat in the Southern Hemisphere. 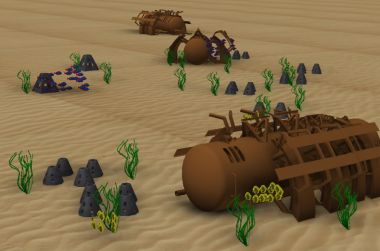 King Reef integrates offshore structures into a purpose built reef through re-engineering and augmentation with specially designed concrete substrates and is a world first solution to habitat restoration. 58 reef modules ranging in height from one to 10 meters (33 feet) were laid out in a specific formation across two acres on the ocean floor. Six steel tanks form the key stones of the reef. These tanks were buoyancy modules which have been retired from an offshore facility operated by BHP. The air filled tanks once formed part of the support structure for subsea facilities but have never been in contact with hydrocarbons. 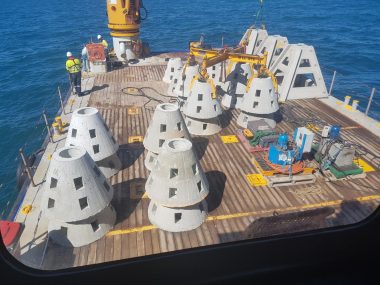 The tanks will create habitats that are similar in design to existing steel reefs that have been deployed at Moreton Bay, Sydney Harbour and Rottnest Island. Concrete and steel structures laid out across two acres of ocean floor at a depth of 18 meters (60 feet) provide a habitat volume equal to that of 11 Olympic-size swimming pools. These structures will provide cavities and ledges for fish to take refuge in. Inquisitive, large pelagic fish such as Spanish mackerel will be attracted to the structure initially, and the reef will host newly established sponges, corals and algae, offering a habitat for reef fish species. 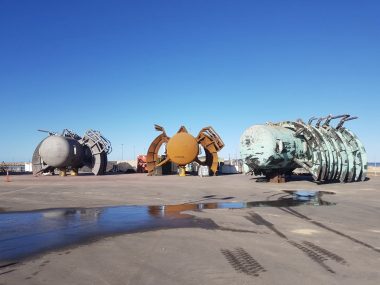 King Reef is located 3.5 nautical miles north of Exmouth in Western Australia and is readily accessible from local boat ramps. The new reef has been named King Reef in honor of Marine Surveyor Lieutenant Phillip Parker King, who named Exmouth Gulf in 1818, and the late George King, a pioneer of charter fishing in Exmouth and Coral Bay in the 1960s and 1970s.

Engineered reefs have been scientifically shown to be very productive and typically support 20 times more fish than the surrounding reef ecosystems.