The aircraft flaperon recently retrieved from La Réunion has been confirmed as coming from a Boeing 777 aircraft, and Malaysian Prime Minister Najib Razak has now confirmed it belonged to the missing flight MH370.

"Today, 515 days since the plane disappeared, it is with a very heavy heart that I must tell you that an international team of experts has conclusively confirmed that the aircraft debris found on Reunion Island is indeed from MH370," Najib announced to reporters.

Meanwhile, the ATSB, which is leading the search for MH370, has reviewed its search calculations and priorities and is satisfied that the discovery of the flaperon at La Réunion, 16 months after the disappearance of MH370, is consistent with the current underwater search area in the southern Indian Ocean.

Drift modelling by Australia’s Commonwealth Scientific and Industrial Research Organisation (CSIRO) shows that material from the current search area could have been carried to La Réunion, as well as other locations, as part of a progressive dispersal of floating debris through the action of ocean currents and wind.

The map below shows the indicative drift of debris from the search area as at 30 July. Blue, black and red dots simulate items with leeway factors (applied to the 10m wind velocity) of 1.2, 1.5 and 1.8 percent. 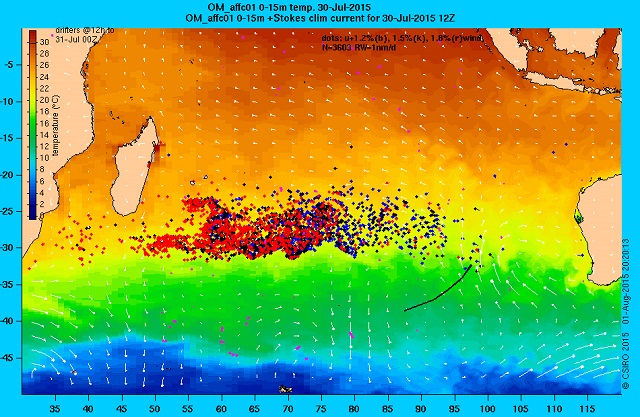 The items originated along the black arc (seventh arc) on March 8, 2014. White arrows are the winds for the day shown. Magenta symbols are positions of real drifting buoys (with sea-anchors at 12m) on the day. Their movement has been used to estimate the errors of the ocean current component of the total drift velocity.

Reverse drift modelling – tracking the debris back from where it was found to a possible point of origin – is very imprecise when used for long time periods. To the extent they can be relied on, the results of reverse modelling are also consistent with the defined search area, said the ATSB in a statement.

A great deal of additional material has been handed over to the police on La Réunion.  While this is being examined, so far none of it appears to have come from an aircraft.

The drift modelling indicates that if there is any more floating debris from MH370, it could be anywhere in hundreds of thousands of square kilometres in the Indian Ocean.

The ATSB continues to rely on the careful analysis of satellite data and aircraft performance information to define the search area and the discovery of the flaperon affirms this work, it says. For this reason, thorough and methodical search efforts will continue to be focused on the defined search area in the southern Indian Ocean.

The plight of MH370 is one of the biggest mysteries in aviation history. The plane vanished from radar screens shortly after taking off from Kuala Lumpur on March 8, 2014, bound for Beijing. Investigators believe the plane was flown thousands of miles off course before eventually crashing somewhere off Australia.