It also represents the lowest number of incidents since ReCAAP ISC began keeping records in 2007.

There was improvement at some ports and anchorages in 2018, particularly at the Manila anchorage in the Philippines. Successful arrests of perpetrators were reported in Bangladesh (Chittagong), India (off Alang, Gujarat), Philippines (Manila), Indonesia (Pulau Batam), Malaysia (Pulau Tinggi, Sarawak and off Tambisan, Sabah)

There was no theft of oil cargo in 2018. While there were two incidents of suspicious intent to steal oil cargo reported in June and August 2018, the Malaysia Maritime Enforcement Agency (MMEA) successfully arrested the mastermind and perpetrators in both incidents

There were more than 10 incidents at ports and anchorages  in Chittagong, Bangladesh, and in Samarinda, Indonesia. There were also slight increases reported in Malaysia and Vietnam.

Despite the decrease in the number of incidents in the Sulu-Celebes Seas and waters off Eastern Sabah, the abduction of crew for ransom remains a serious threat in the area.

Over the past 12 years (2007-2018), ReCAAP ISC has collected the data of 1,560 incidents of piracy and armed robbery against ships in Asia. Using data analytics, ReCAAP ISC has made several observations on the incidents:

•  The most commonly used weapons were knives/machetes. The weapons were often used to cut mooring ropes and remove items on the deck such as life/floating buoys, fire hose, etc

•  In 32 percent of the incidents, nothing was stolen by perpetrators who escaped empty-handed when sighted by the crew

•  There was no evidence to suggest that certain types of ships were targeted, but  63 percent of incidents occurred on board either tankers or bulk carriers 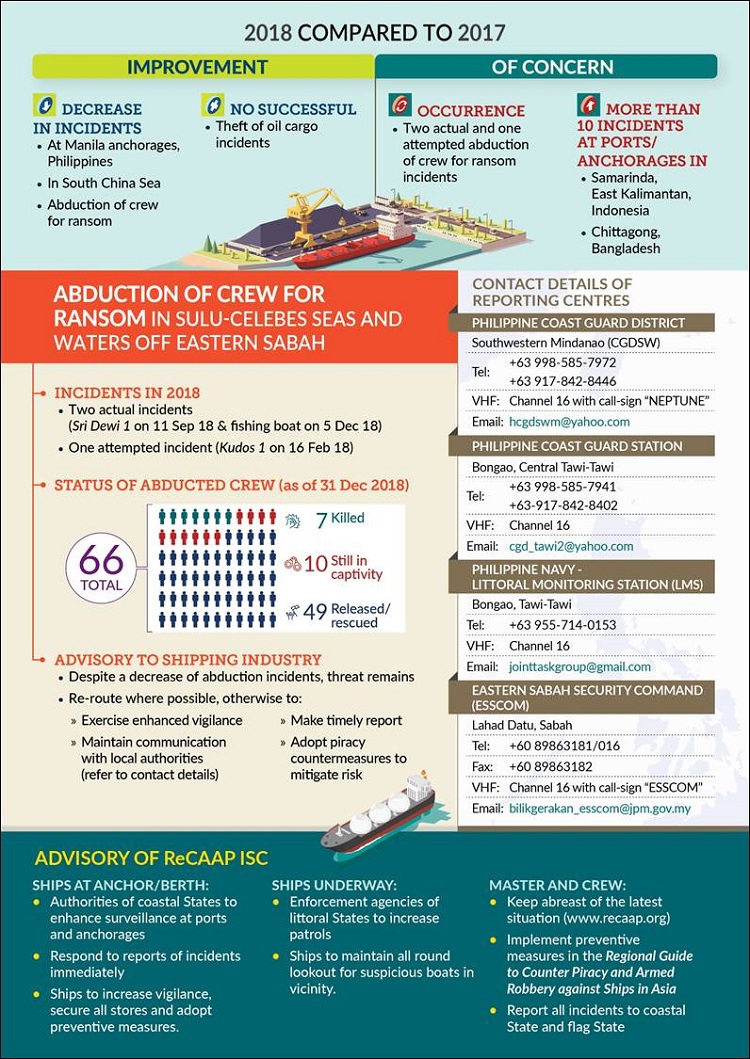