ReCAAP ISC reports seven incidents of armed robbery against ships in July, an increase from June when only one incident was reported.

During January to July this year, 47 incidents, 36 actual incidents and 11 attempted incidents, have been verified and reported to the ReCAAP ISC. Compared to January-July 2017, this is a four percent decrease in the total number of incidents. The overall severity of incidents this year has been the lowest in 10 years, with over two thirds involving petty theft.

The latest two incidents, in July 2018, involved tug boat, Sung Fatt 31 towing barge, Sung Fatt 38 loaded with scrap metal while underway in the westbound lane of the Traffic Separation Scheme (TSS) in the western sector of the Singapore Strait and the tug boat, Bintang Ocean 3 towing barge, Winbuild 2313 while underway in the eastbound lane of the TSS in the eastern sector of the Singapore Strait. In both incidents, the masters and crew did not notice the sampans alongside the barges. The perpetrators boarded the barges and escaped with scrap metal from Sung Fatt 38 and coils of tow line from Winbuild 2313.

Although there was no actual incident of abduction of crew in the Sulu-Celebes Seas and no theft of oil cargo during January-July 2018, the threat of these incidents still remains, says ReCAAP ISC. 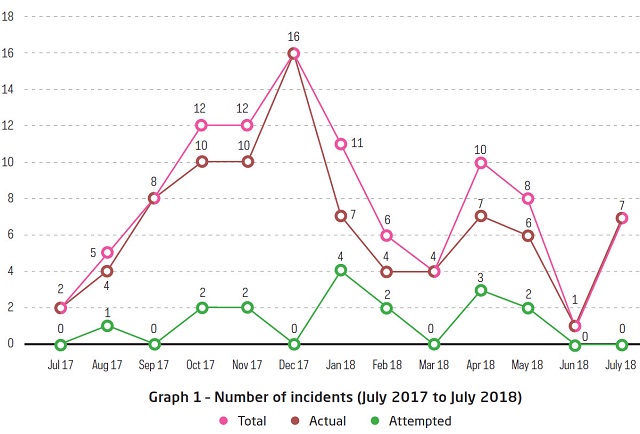