Additionally, the Chairmanship for the Forum was officially transferred from the U.S. Coast Guard to the Finnish Border Guard.

Canada, Denmark, Finland, Iceland, Norway, Sweden, Russia and the United States are members of the Forum.

The signing culminated two-years of collaboration by agency representatives. Since the Forum’s inception, working groups have established strategies, objectives and tactics aimed towards achieving common operational goals in the region. In addition, nation representatives participated in table top exercises in Reykjavik, Iceland and the District of Columbia.

A live exercise in the Arctic is being planned for later this year.

The Proceedings of the 2016 Kiel Conference Maritime Security Challenges: Focus High North was published recently with Andreas Østhagen from Norway, a senior fellow at The Arctic Institute, looking at the potential of the Arctic Coast Guard Forum.

Østhagen highlights the protection of state’s sovereign rights as a challenge that the Forum faces. “Coast guards uphold sovereignty through naval presence and the enforcement of national jurisdiction. Fisheries inspections, for example, are an integral part of protecting a state’s sovereign rights, through the management of its own marine resources. This authority cannot be shared without the coastal state ceding some of its sovereignty. Therefore, there are some limitations to the extent of collaboration within the framework of the Arctic Coast Guard Forum.”

Collaboration amongst all the members will also have inherent limitations due to Russia’s presence, he says. Sensitive information cannot be shared on the same level as between the five NATO-members, or even the two NATO partners Finland and Sweden. It is also possible that some of the Arctic states will place strict mandates on their coast guard representatives when they work with their Russian counterparts.

“Yet, how much the Forum will be hampered by the current political situation, ultimately, is dependent on the overall relationship between Russia and the other Arctic states and their willingness to keep this venue sheltered from the larger political environment in the Arctic and beyond. In most cases, coast guard affairs constitute so called ‘low politics’, which states tend to separate from larger diplomatic affairs,” says Østhagen.

He sees the effective integration of Russia into the Arctic Coast Guard Forum as crucial. “In the Bering Sea, the Chukchi Sea and through the Bering Strait, Russia and the United States share an extensive maritime border, settled in 1990. Similarly, in the Barents Sea, Russia and Norway share an extensive and predominantly ice-free maritime border, settled in 2010. Finland shares a maritime border with Russia in the Gulf of Finland, though smaller in size and not in the Arctic.

“In all these border areas, cooperation with Russia on both a practical as well as on a governmental level is essential, to effectively manage straddling fish stocks and provide environmental protection and search and rescue response.”

The stated purpose of the Forum is to further improve the relationship between the Arctic states on a practical level. “In a crisis situation, familiarity with your neighbor is crucial,” says Østhagen, about the potential for shared operations. For example, when a South Korean fishing vessel sank in the Bering Sea, off the Russian coast, in November 2014, the Russian Kamchatka Border Guard District requested U.S. assistance. Several U.S. Coast Guard assets participated in the search for survivors. This example highlights the operational collaboration already taking place between the U.S. and Russian coast guards across the Bering Strait.

The Forum can help enhance this collaboration as activity increases, he says, particularly, the sharing of information and best practices. “Improving maritime situational/domain awareness and sharing information is also particularly relevant. Arctic operations are defined by limited access to communication technologies, due to the high latitude and the lack of investments in Polar specific satellites and communication systems.”

The potential for pooling of resources is good, and Østhagen says the establishment of search and rescue centers at geographically relevant locations in the Arctic is important. One such center could be a Search and Rescue-unit in Keflavik, Iceland, able to rapidly conduct operations along the East coast of Greenland, north of the Faroe Islands and in Norwegian waters around Jan Mayen, in addition to Iceland’s home waters.

“Another example would be an oil spill response unit on Svalbard, responding to a potential spill off the coast of East Greenland (should drilling commence) or in the Barents Sea. For tasks that require immediate response, such as oil spill response or search and rescue, pooling of coast guard resources could hold value and be orchestrated by the Arctic Coast Guard Forum.”

Østhagen says the Forum adds another layer to the governance of the region, ideally taking a step beyond the conference rooms and into real-life operations and practical action. “Quite frankly, establishing the Forum is an accomplishment in itself, given the current political environment.” 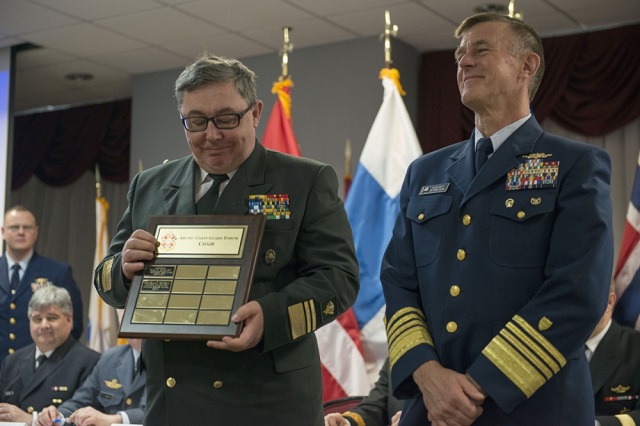