Shortly after the footage was made available to the government, AMSA inspected the vessel again while she was docked in Fremantle, Western Australia, and demanded a third party air flow verification report to prove compliance with air flow standards before the vessel would be authorized to depart Australia again. Subsequently, works were conducted on the vessel's ventilation system and an automatic system for providing water to the livestock was installed.

The whistle blower footage shows images on board an August 2017 voyage of the Awassi Express for Emanuel Exports when 2,400 sheep died of heat stress. Throughout a 60 MInutes program, whistleblower footage from five separate voyages was aired depicting thousands of sheep suffering severe heat stress; sheep caked in melted feces and urine; injured and sick animals left to die slowly; decomposed bodies left in pens with living sheep and pregnant ewes giving birth and their lambs dying. 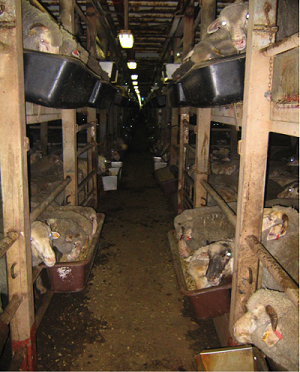 An AMSA spokesman told The Australian that in the past five years, it had found problems with 19 livestock carriers on 27 occasions. The issues weren't necessarily ones that could impact animal welfare.

As a result of the whistle blower footage, politicians and voters from a spectrum of political parties have spoken out against the trade. The Labor Party, currently in opposition, has committed to phase out the live export of sheep. The federal Liberal government has called on livestock veterinarian Dr. Michael McCarthy to review the live sheep trade, and his report is expected to be released in the next week.

Meanwhile, following the airing of the whistle blower footage, AMSA has now granted the Awassi Express an Australian Certificate for the Carriage of Livestock, and the twin-tiered Maysora, built in 1989, has sailed to the Middle East with 74,000 sheep and 8,000 head of cattle on board. This week, the twin-tiered Al Shuwaikh, built in 1986, prepares to load up to 80,000 sheep in Fremantle.