American Cruise Lines, an operator of small cruise ships on America’s rivers and coastal waterways, is launching a new building program that calls for the construction of 12 smaller, “go-anywhere” ships. The project, which will be one of the largest American shipbuilding programs, will more than double the nation’s current capacity for domestic coastal cruises.

Known as Project Blue, the vessels will each be 241 feet long, 56 feet wide, and feature a hybrid catamaran design that enables both shallow draft access and stable sailing along lakes, rivers, bays, and America’s coastline. According to the company, the distinct boats will have unprecedented near-shore operating versatility. Each boat in the Project Blue fleet will accommodate 109 passengers and 50 crew.

“Project Blue started as a design challenge to create a boat small enough for New England harbors and stable enough for the Alaska Inside Passage, with a draft shallow enough for the Atlantic Intracoastal Waterway,” said Charles B. Robertson, President & CEO of American Cruise Lines. “These boats can run almost anywhere, and because there will be 12 of them, they will be deployed all over the United States.” 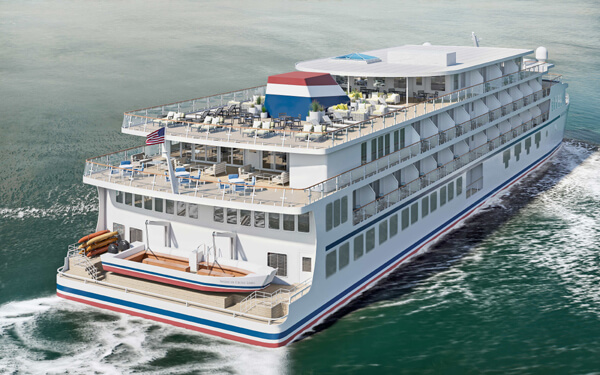 The first two Project Blue ships, which will be named American Eagle and American Glory, are already under construction and are due for delivery in 2023. Like all of ACL’s new ships, the Project Blue fleet will be built by the Robinson family-owned Chesapeake Shipbuilding in Salisbury, Maryland. The shipyard is also currently building ACL’s larger 180 passenger modern riverboats. The fifth ship of the Modern Riverboat Series, the American Symphony, designed and built by Chesapeake Shipbuilding was rolled out of the building hall on November 30, 2021, and is due for delivery to ACL in the summer of 2022. The cruise line also plans to build a sixth ship for the larger class due to enter service in 2023.

“Together with Chesapeake Shipbuilding, we built the first modern riverboats in the country. Now we are proud to introduce another new ship design for domestic exploration. American has specialized in small ship cruising for over 30 years, and continuing to innovate and expand the possibilities for cruising close to home is central to our mission,” said Robertson.

The new fleet will feature modern decor created by Studio DADO of Miami, which is also a designer for large ocean going cruise ships. Each ship will offer 56 staterooms—including a range of large standards, suites, and singles—nearly all with private balconies. Observation and sitting areas will be available at the bow, both inside and outside, and each ship will feature an expansive forward lounge with 270-degree views and two dining venues. At the stern, the ships will have a new adventure deck equipped with kayaks, tender, and other activity related options relevant to the itinerary.

The first two ships, which are both named in honor of the company’s first two cruise ships, will debut operating East Coast itineraries. American Cruise Line did not provide a timeline for the delivery of the additional ships planned for the class. 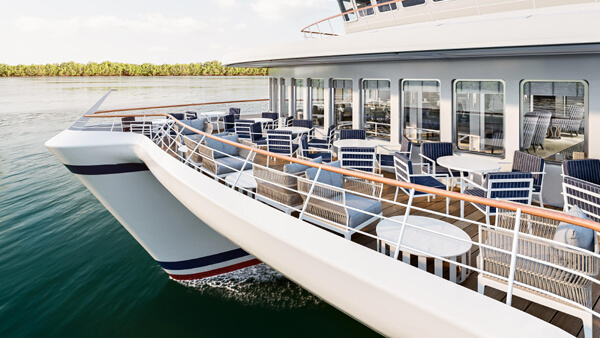 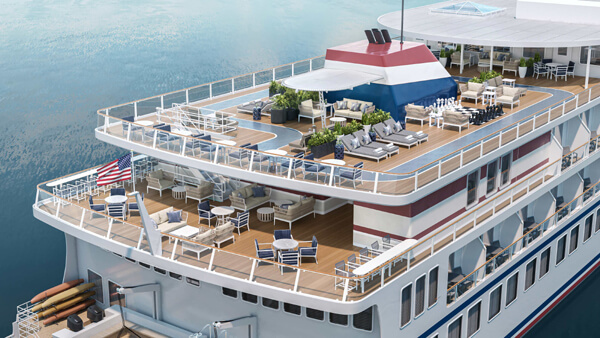