Alaska cruises jumped to the top spot from last year's fifth place to become the most booked domestic vacation for 2018, according to Travel Leaders Group's 2018 Travel Trends Survey.

John Binkley, president of Cruise Lines International Association Alaska, expects the Alaska cruise industry will see unprecedented growth over the next two years, as it ranks very high in guest satisfaction.  “Alaska is an exotic destination for many travelers. There aren’t many places where cruise passengers get to experience the mountains, glaciers, wildlife, culture and such hospitable hosts who welcome and eagerly share what they love most about our state.”

Top "Up and Coming" International Destinations 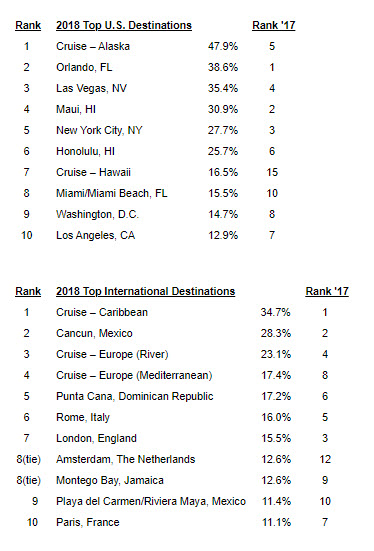 Based on actual booking data, the survey was conducted over two months from December 20, 2017-February 19, 2018, with responses from 1,355 North American-based travel agency professionals.