The first large cruise ship bunkered with a blended marine biofuel making the latest expansion of biofuel which has drawn wide support in the commercial shipping industry. The bunkering took place with Carnival Corporation’s AIDA Cruises aboard the AIDAprima and provides a blueprint for the wider cruise sector adoption of alternative fuels.

AIDA has long been the pioneer within Carnival Corporation testing made of the new concepts for alternative power and improving environmental performance. The 125,500 gross ton AIDAprima became the world’s first cruise ship to use LNG as a fuel when it was introduced in 20216. Built by Japan’s Mitsubishi, the vessel has MaK engines from Caterpillar including one dual-fuel 12V motor capable of powering the cruise ship in port. AIDA used this as a testing ground for LNG power fueling the AIDAprima with LNG from tank trucks in ports including Hamburg. While AIDAprima and her sister ship AIDAperla do not have LNG storage tanks onboard they paved the way for AIDA 2018 introduction of AIDAnova the first cruise ship capable of sailing on LNG.

“With the successful start of biofuel usage, we have proven that gradual decarbonization is possible even on ships already in service,” commented Felix Eichhorn, President of AIDA Cruises. "We continue to actively explore all opportunities to decarbonize our fleet while advancing efficiency in line with international carbon intensity reduction targets. An important prerequisite for us as a cruise line to be able to use it is that it becomes widely available on an industrial scale and at marketable prices."

The AIDAprima which is 981 feet long fueled with a blended biofuel made from 100 percent sustainable raw materials such as waste cooking oil, and marine gas oil (MGO) during its layover in Rotterdam on July 21. The fuel is supplied by Dutch biofuel company GoodFuels. Now that the first roll-out has taken place for an in-service ship, the companies said their cooperation would be developed on a long-term basis. The AIDAprima is currently sailing on seven-day voyages from Hamburg with stops in Southampton, Le Havre, and Zeebrugge. 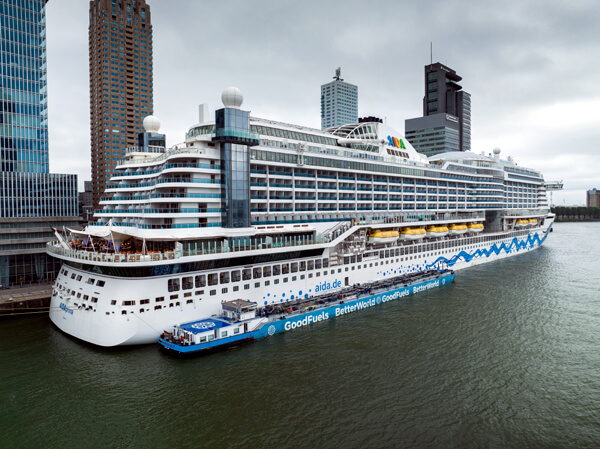 “This first bio-bunkering with AIDA Cruises marks an exciting step forward on the cruise industry’s decarbonization pathway, demonstrating that our sustainable biofuels are a safe, technically viable, and convenient option to drastically cut down emissions from passenger vessels,” said Dirk Kronemeijer, CEO of GoodFuels. We are delighted to have worked alongside the trail-blazers at AIDA Cruises in the past few months to make this milestone a reality, and we look forward to collaborating again in the future.”

AIDA had previously tested the use of regenerated biofuels in marine diesel engines together with research partners at the University of Rostock. The cruise line has also completed the installation of the first fuel cell on board a cruise ship aboard the AIDAnova. The line is also commissioning what it is calling the largest battery storage system in cruise shipping with a capacity of 10 megawatt hours on board AIDAprima. By comparison, Havila’s Norwegian coastal cruise ships currently have a 6.1 megawatt hours battery capacity. AIDA is focusing on the expansion and increased use of shore power while in port.