The Legacy of the MS Estonia Tragedy

Leading representatives from search and rescue (SAR) organizations in Canada and trustees of the International Maritime Rescue Federation (IMRF) met late last month. Their meeting coincided with a grim anniversary.

The Ro-ro cruise ferry MS Estonia turned on its side and sank in the Baltic Sea on 28 September 1994.

Estonia's bow doors failed at about 0115 while she was on passage from Tallinn to Stockholm. The weather was described by another ferry master in the area as "normally bad" for the time of year. Seas swept rapidly into the open vehicle decks and the ship listed quickly and heavily to starboard. A broken distress call was made at 0122.

By 0130 Estonia was lying on its side. By 0150 it had vanished from the radar screens of the astonished shipping that was turning to its aid.

There were 803 passengers and 186 crew aboard it that dark night – 989 people in all. The catastrophic listing of the ship meant that many of them never had a chance of getting out; but the investigating commission found that up to 310 may have done so. 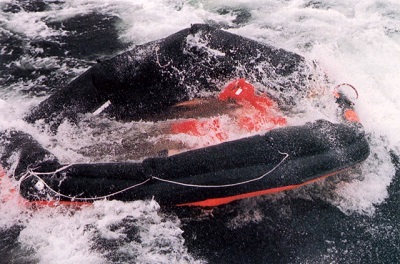 About half of these made it into liferafts – many of which failed to inflate properly.

There had been no time to launch the ship's boats. The water was cold (10–11°C/50–52°F) and many people were poorly dressed or had no lifejackets.

It was, in the jargon, an uncontrolled abandonment. People who fell or jumped into the water without lifejackets or who were badly injured, said the commission, "succumbed so quickly that no rescue unit could have reached them in time."

The first ship to arrive on scene did so at 0212, about 20 minutes after Estonia sank. Four more passenger ferries followed.

The first rescue helicopter did not arrive until about 70 minutes after the sinking. During the next three hours six more vessels and six more helicopters arrived. 138 people were rescued (one died in hospital later).

Of these, 104 were picked up by helicopters, and only 34 by ships, although the ships were on scene long before the helicopters.

The ships were not prepared for rescue. Their 'rescue boats' could not be launched in the conditions: they had to improvise. The ferry Isabella rescued the largest number – 16 – of those recovered by ships, by deploying her own evacuation slides and hauling people up them. But a single Finnish Border Guard Super Puma helicopter rescued 44.

How have things improved, 20 years on? What have we learned?

In many ways, says IMRF, at least on ships on international voyages, things are better. Ship design and damage stability, and crew training in crisis and crowd management have been improved, for example. Search and rescue cooperation plans have been developed between passenger ships, their operators and SAR services.

Ro-ro passenger ships of the type that responded to the Estonia disaster were quickly required to be fitted with means of rescue and, after long and sometimes difficult debate, all ships on international voyages are now required to have ship-specific plans and procedures for recovery of people from the water – although this regulation only came into force on 1 July 2014.

But not everything is as ready as it might be, says IRMF. Mass rescue operations are rare events, and maintaining enough dedicated capability to respond to them is impractical. There is consequently a 'capability gap', which needs to be filled when such an event eventually occurs.

The IMRF has played its part in helping to improve readiness, and to fill that 'capability gap'. The organisation took a leading role in the debate on the recovery regulation, for example, and helped prepare detailed guidance when the IMO conducted a full review of passenger ship safety some years after the Estonia went down. 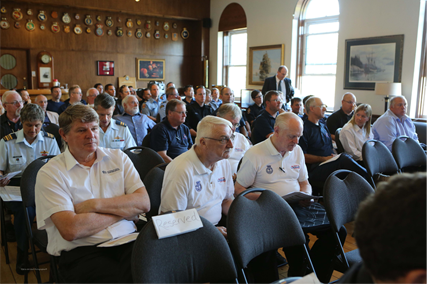 Now, with their mass rescue operations (MRO) project, the IMRF is seeking to improve things still further, providing a focus on the subject and a forum for discussion. The organization has run three maritime mass rescue conferences, seeking to learn the lessons of such high consequence incidents.

The first, in 2010, was addressed by Esa Mäkelä, master in 1994 of the ferry Silja Europa and on scene commander (as the role was then called), for the response to the Estonia disaster.

Astonishingly, the IMRF was the first to ask him to speak about his experience, nearly 16 years after the event. Learning lessons can be a difficult process.

From the conferences, and guided by a subject-matter expert group, the IMRF is developing mass rescue guidance covering all the main aspects of such events so that planners and responders can better prepare.

Filling that 'capability gap', for instance, can be a matter of sharing resources internationally; of identifying and utilizing additional resource such as shipping in the area; or of extending survival times by providing on-scene support.

From this gathered and shared experience the IMRF has developed a mass rescue workshop package, designed to bring the main players together to talk through the issues, examining both the problems and potential solutions. Good communication, before, during and after such difficult cases, is vital to good response.

Disasters like that that befell Estonia are thankfully rare. But their rarity is part of the problem: it is difficult to maintain readiness. The IMRF's MRO project – getting the right people talking together and providing them with guidance based on accumulated experience – helps to overcome that difficulty.

It is 20 years since Estonia – and yes, things have improved. But there are still improvements to be made, and the IMRF says the industry needs to focus on them. For, with mass rescue operations, it's not really a matter of 'if'. It's a matter of 'when'.

At this year’s meeting, discussions and presentations looked at the structure of Maritime SAR in Canada, took in case studies highlighting the challenges of rescue in some of the more remote areas of Canada and provided an update on the development of RCM-SAR from the standardization of their vessels to a new proposed training facility.

Port Metro Vancouver presented on the recently established Marine Emergency Co-Ordinating Committee (MERCC), which brings together all the organizations, who have a stake in maritime SAR operations in the port area to build relationships, so there is "no need to exchange business cards in the middle of an emergency".

The IMRF brings the world's maritime search and rescue organizations together in one global - and growing - family, accredited at the IMO. IMRF's member organizations share their lifesaving ideas, technologies and experiences and freely cooperate with one another to achieve their common humanitarian aim: "Preventing loss of life in the world's waters".