The History of the Nella Dan: Beset!

The MV Nella Dan and the shipping company J. Lauritzen’s red polar ships constitute a unique chapter in Danish maritime history. Nella Dan was a legend among polar ships. Her track record of 85 trips and half a million nautical miles in Antarctica – or 24 times around the Earth – made her, among other things, the ship in Australian service with the most miles and the longest period beset in the ice.

Whether Shackleton’s famous ad in the London Times is real or myth, any true polar adventure includes stories of hardship and of ships beset by ice. And the story of Shackleton’s ‘Imperial Trans-Antarctic Expedition 1914–17’ (the Endurance expedition), which ends with the loss of ships but the safe return of the entire crew after an almost unimaginably heroic effort, is truly one of the greatest stories of polar history.

Throughout history, many ships have been lost in the early attempts to explore polar regions or in risky attempts to come to the aid of other expeditions. In modern history, too, pack and pressure ice have so impeded passage that crews had to be abandoned on the ice.

Ice is beyond anyone’s control. It can seem like a living, creeping organism, seizing the ship in a deadly grip. In the vast nothingness of ice, from a distance the scene may look almost serene, but for those on board, the experience of the ice closing in around the hull, causing it to shriek and creak, can be nerve-racking and unbearable. Like a fingernail on a blackboard. Crew and passengers are utterly powerless.

Nella Dan was no icebreaker – and her 2200 horsepower hardly gave her the strength to push off more than 1.5-metre-thick ice, but she was built to twist and turn as she danced with the solid white sea. Over the years, skilled ice skippers, ship’s mates and crews grew increasingly adept at reading the movements of the ice and slipping through from pocket to pocket of open water.

Sometimes, still, their luck ran out; every opening closed up, and the ship was stuck. When the indomitable little red fox found itself with no way out, the only option was to hunker down and prepare.

Once the ice began to close in around the ship, she was pushed up from bow to stern. The pressure on the hull could be tremendous, and the pressure ice screeched up the sides of the ship, breaking off far above the ice surface. Often creeping up slowly, but sometimes moving as fast as one meter every 10 seconds. Sometimes, subsequent inspections found that the steel hull had dented under the pressure. But all in all, she withstood the onslaught, year after year. As the pressure increased, Nella Dan popped up like a cork, thanks to the rounded hull. Bow raised high, propeller in the water.

Everyday life on board changed. Being beset could mean a welcome respite from established routines, and a ladder leading down to the ice was quickly set up. Quite a few South Pole Cups and national soccer matches have taken place on the ice.

Nella Dan still holds the Australian record, being beset for seven weeks in the 1985/86 season after making it almost all the way to Amundsen Bay at 67 degrees south on her first trip of the season, before the ice seized hold of the ship and refused to let go.

The Japanese ice breaker Shirase eventually liberated Nella Dan. Over time, this and other incidents have been documented on film and in photos, articles and stories. 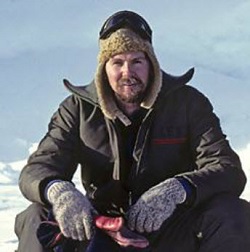 I joined the voyage at Casey after wintering there in 1986, and the plan was to spend the summer with Ian Allison doing Glaciology research in the Bunger Hills before going home to Australia.

But it was not to be.

Nella Dan encountered heavy pack the day after on January 5, and I recall Captain Arne Sørensen steering from the crow’s nest all day.

That night there was open water for a while through a large polynya then we rammed into more heavy pack ice the next day. We were just 80 miles from the ice shelf but couldn’t get through. By January 7, the pack ice was closing in, and we were just hovering around 64S 102E, trying to keep a bit of water around the ship, but by January 8 we were beset.

The helicopter pilots Gerry Findlay, Gene Johnson and Peter Waters flew a number of ice reconnaissance flights over the next few days in our two onboard Bell 206 Jet Rangers, but the news was not good – heavily ridged sea ice to the west and south, some with sastrugi to 1m indicating fast ice. The helicopter flights confirmed what we knew from our satellite facsimile images – a huge iceberg to the west, estimated as 30km x 50km in size, which was thought to be the actual cause of the ice build-up.

A decision was made to abandon the Bunger Hills program and head to Larsemann Hills as soon a Nella Dan was free, which was not good news for Ian Allison and me as the glaciers in that area were not significant enough for Ian to study.

By January 13, we were still beset with no prospect of breaking free. Fortunately, on January 13 Captain Arne Sorensen received an Inmarsat call from the Soviet ice strengthened supply vessel, Mikhail Somov, offering help. Mikhail Somov was in the area heading for Bunger Hills. 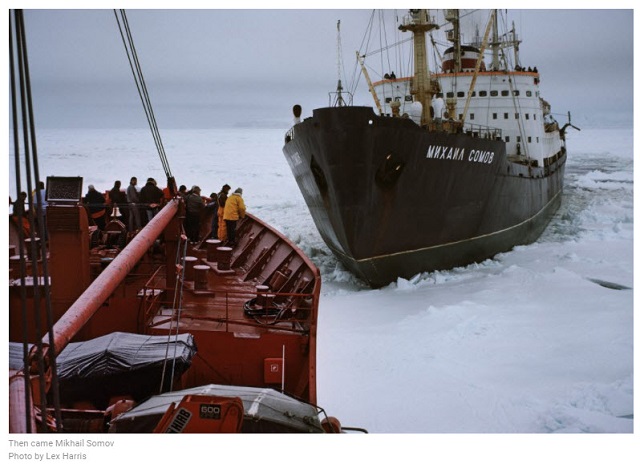 The first Soviet MI-8 chopper appeared at about 10:30pm, flying a reconnaissance over Nella Dan. Around midnight we first saw Mikhail Somov’s lights on the horizon. She was about 20 miles away. Two Jet Rangers left from Nella to Somov and returned without landing. Somov arrived at about 3:30am and immediately began breaking Nella out. She broke a “V” around Nella’s bow, then drove along Nella’s starboard side (greatest ice pressure) till the ice trapping us cracked, and we were free. 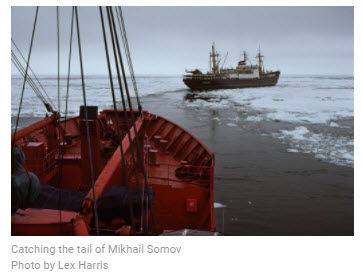 It took till about 8:00am to get Nella free, lots of backwards-forwards work, breaking up the ice around Nella. Then she sailed north, with Nella following about 4 Nm behind, to the edge of the pack ice about 35 miles north of where Nella was beset.

We reached the edge of the pack about 3:00pm on Wednesday January 14. Nella pulled up alongside Mikhail Somov and tied up for a couple of hours. VIPs from both sides inspected each other’s ships. The rest of us “not-so- VIPs” just tossed goodies to each other across the water, Russian hats, mitts etc. for whisky, music etc.

We left Somov at about 5pm and headed for Larsemann Hills. Mikhail Somov turned south again to Bunger Hills. The pack was no problem for Mikhail Somov, but it was decided that Nella would not follow to Bunger Hills in case she could not get out again later in the season.

Nella Dan reached Larsemann Hills on the morning of Sunday January 18, and after some very skilfull maneuvering by Captain Arne Sorenson through spectacular icebergs, moored to some fast ice.

After a day of flying in stores and fuel and setting up Law Base, Nella Dan departed for Davis at around midnight. A party of 19 people stayed for a 4-5 week season at Law Base, with Lloyd Fletcher as Officer in Charge. After a brief visit to Davis, Nella Dan returned to Hobart with a short stop enroute at Macquarie Island.

Mikhail Somov was built in 1975 and is still operating. Mikhael Somov knew what besetment was all about. In 1985 the ship was trapped in ice near Antarctica for four months (March - July, 1985) before being rescued by the icebreaker Vladivostok.