Storming the Hill for Recognition for USMM of WWII

In January, Rep. Janice Hahn (D-CA-44) introduced H.R. 563--Honoring Our WWII Merchant Marine Act of 2015- which would compensate qualified mariners with a one-time payment of $25,000.

Morris Harvey, president of the American Merchant Marine Veterans, said while HR 563 is still in a House subcommittee, it would also require the senate to pass it before it goes into effect. Harvey and six other WWII mariner vets will be “storming the Hill” next week trying to gather support. Good luck! 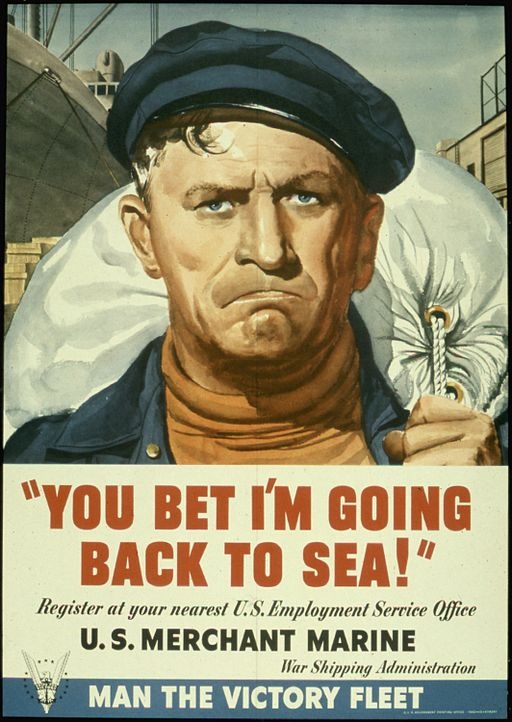 World War II ended 70 years ago and today its veterans are in their late eighties and nineties. The military veterans of WWII were honored for their contributions to liberate Europe and Asia Pacific from the tyranny of the Axis with GI benefits for education, home loans and medical. They went on become the greatest generation and most influential middle class in history.

Those that served in the U.S. Merchant Marine of WWII were also thrust into war and forced to fight with other free peoples for the right to live among their neighbors in freedom, in common decency, and without fear of assault.

Every single man, woman and child would become partners in the greatest undertaking in American history. They accepted the bad news, the good news, the defeats, the victories, and the changing fortunes of war. Every citizen in every walk of life shared this responsibility. And, each and every one of them understood the obligation and was determined to prevail.

When the U.S. entered the war on December 7, 1941, five U-boats were deployed to U.S. waters in an operation code-named “Drum Roll.” Unfortunately, the United States had not enforced the blackout of its coastal cities at night. The U-boats lay on the bottom of the ocean during daylight hours, and then surfaced at night to sink the merchant ships that were silhouetted against the glow of the city lights.

It is estimated that 400 Allied ships were destroyed in the first six months ending in July, 1942 in the western-Atlantic, and only one U-boat was destroyed. About 5,000 American, British, Norwegian and other seamen were killed in the operation dubbed by the U-boat captains as the “American turkey shoot.”

The battle of the Atlantic for control over the shipping lanes lasted from September 1939 to May 1945. The U-boats sank merchant ships faster than the Allies could build them. In the winter of 1943, conditions in the North Atlantic were some of the worst on record, and the endless lines of merchant ships were attacked relentlessly by the U-boats.

The U.S. Merchant Marine played a significant role in the invasion of Normandy on June 6, 1944. Approximately, 2700 merchant ships were involved in the first wave of the invasion on D-Day, landing troop and munitions under heavy fire.

During the next year, at great risk, about 150 merchant marine ships shuttled 2.5 million troops, 17 million tons of munitions and supplies, and half-a-million trucks and tanks from England to France.

U.S. Merchant Maine in the Pacific

During the invasion of Okinawa, merchant ships came under fire by 2,000 kamikazes and conventional aircraft. At the same time, they delivered many of the 180,000 troops and over 1 million tons of supplies necessary for the invasion. Forty-four merchant ships were sunk, while the U.S. Merchant Marine took part in every invasion from Guadalcanal to Iwo Jima.

The United States Armed Forces suffered 300,000 battle casualties in the Pacific up to July 1, 1945. Following the end of hostilities, the Merchant Marine was given the job of transporting the surrendered troops back to Japan, returning U.S. troops back home, and bringing in replacement troops and supplies for the occupation. Arms and munitions were also returned to the U.S.

On the morning of June 6, 1994, the SS Jeremiah O’Brien, a conspicuous remnant of the once great fleet of over 6,000 ships that made up the 1944 D-Day invasion armada, sat anchored off Point de Hoc. This icon of American heritage; this symbol of an era when a nation was baptized in the blood of its sons and daughters in the greatest global conflict for freedom, was the only 1944 Normandy ship to return for the 50th Commemorative Ceremonies.

Note: The U.S. Merchant Marine of WWII were not recognized as American veterans of WWII until 1988.