The Protecting Blue Whales and Blue Skies program gave awards to 15 global shipping companies for reducing speeds to 10 knots or less in the San Francisco Bay Area and the Santa Barbara Channel region in 2019.

The voluntary program is an initiative to cut air pollution and protect endangered whales. The 2019 program ran from May 15, 2019 through November 15, 2019. Although COVID-19 public health guidelines prevented an in-person awards event, the companies received trophies, plaques, or certificates according to their levels of achievement. 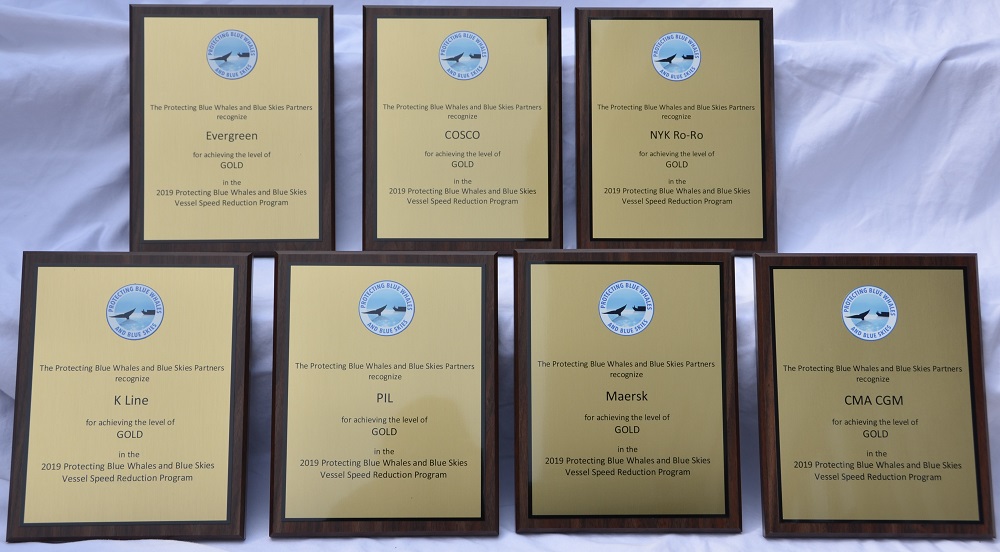 The program partners established four award tiers to recognize participating companies based on the percent of distance their fleet traveled through the VSR zones at speeds of 10 knots or less. Credit was only given if the average speed of a transit through an entire VSR Zone did not exceed 12 knots. 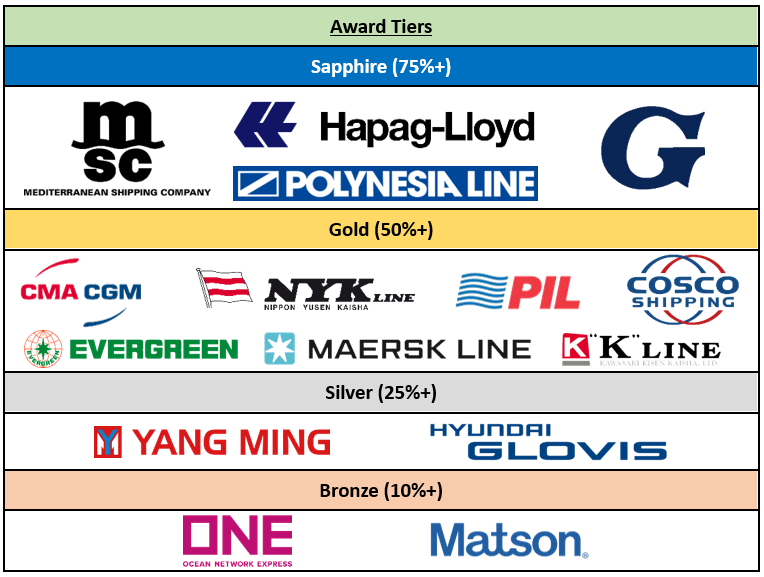 The Mediterranean Shipping Company and Hapag-Lloyd notably achieved the Sapphire tier in the large company category (greater than 30 transits) in both regions by slowing down more than 400 transits, combined. Polynesia Line and GALI achieved the Sapphire tier in the small company category (less than 30 transits) in both regions. For their outstanding commitment, all four of these companies earned the Protecting Blue Whales and Blue Skies Whale Tail award.

Automatic Identification System (AIS) transponders on each ship continuously transmitted the ship’s speed, heading, and location. AIS data was analyzed for each fleet and the company’s performance was classified by tier.

Companies that performed at Gold or Sapphire level were awarded a financial incentive. Five companies – COSCO, Evergreen, GALI, K Line, and Polynesia Line – generously declined  their financial incentive payment. Those funds have been reinvested in the 2020 program. 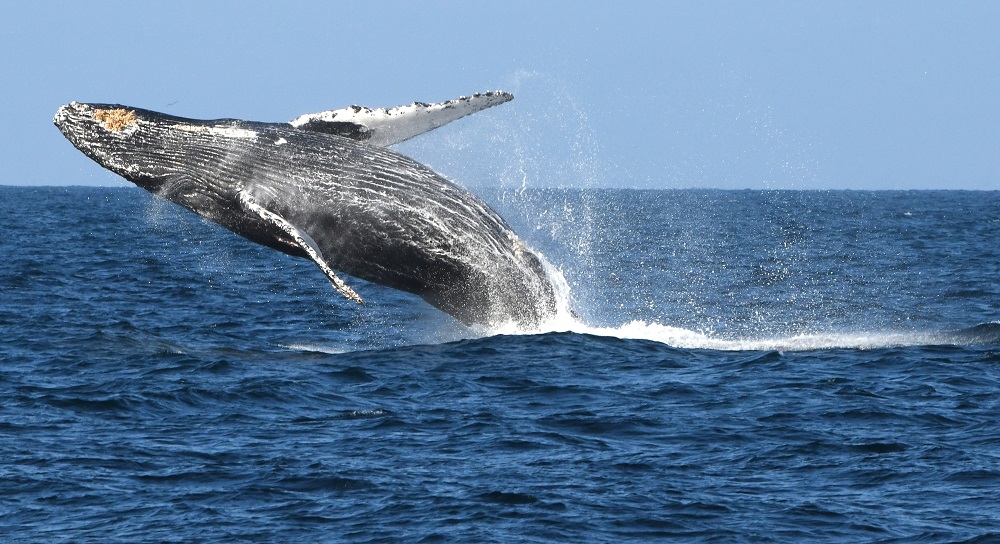 The 2020 program began on May 15, 2020, and runs through November 15, 2020. Shipping companies receive recognition and financial awards based on the percent of distance traveled by their vessels through the Vessel Speed Reduction (VSR) zones at 10 knots or less and with an average speed of 12 knots or less. (The average baseline speed of participating ships prior to the incentive program is approximately 15 knots in the VSR zones.)

The 10-knot target follows the National Oceanic and Atmospheric Administration’s (NOAA) requests for all vessels (300 gross tons or larger) to slow down during the months of peak endangered blue, humpback, and fin whale abundance to protect these whales from deadly ship strikes. 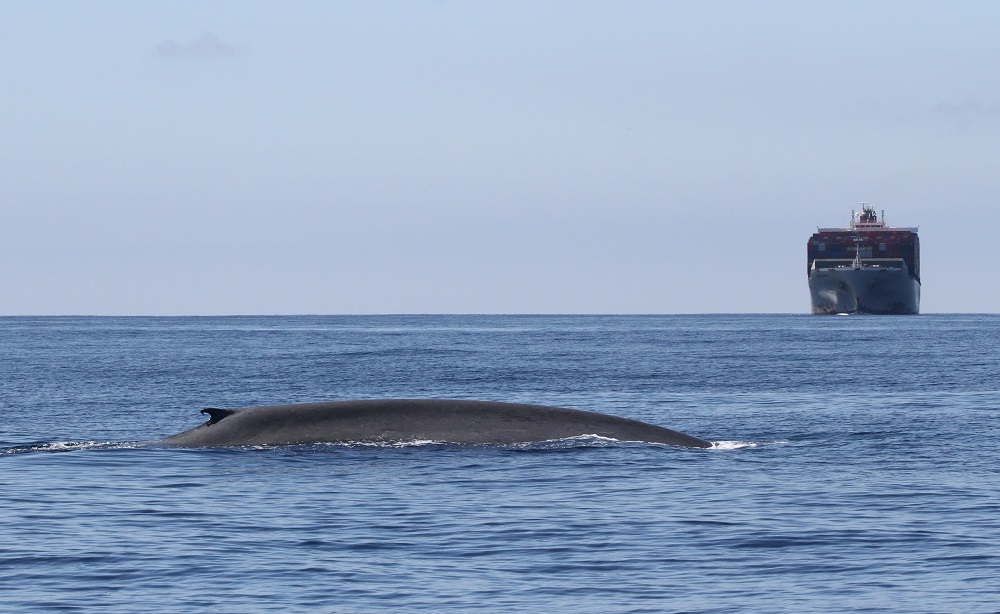 NOAA has identified ship strikes as a leading cause of death; reducing these mortalities is a major priority of NOAA’s, including NOAA’s West Coast national marine sanctuaries. Documented deaths totaled 48 endangered whales from 2007-2019, and likely represent only a small fraction of the total number of ship strikes annually.

The timing of the program also coincides with the season when ground-level ozone (smog) concentrations are typically high. The 10-knot target allows ships to travel at an efficient operating load using less fuel and producing less pollution. 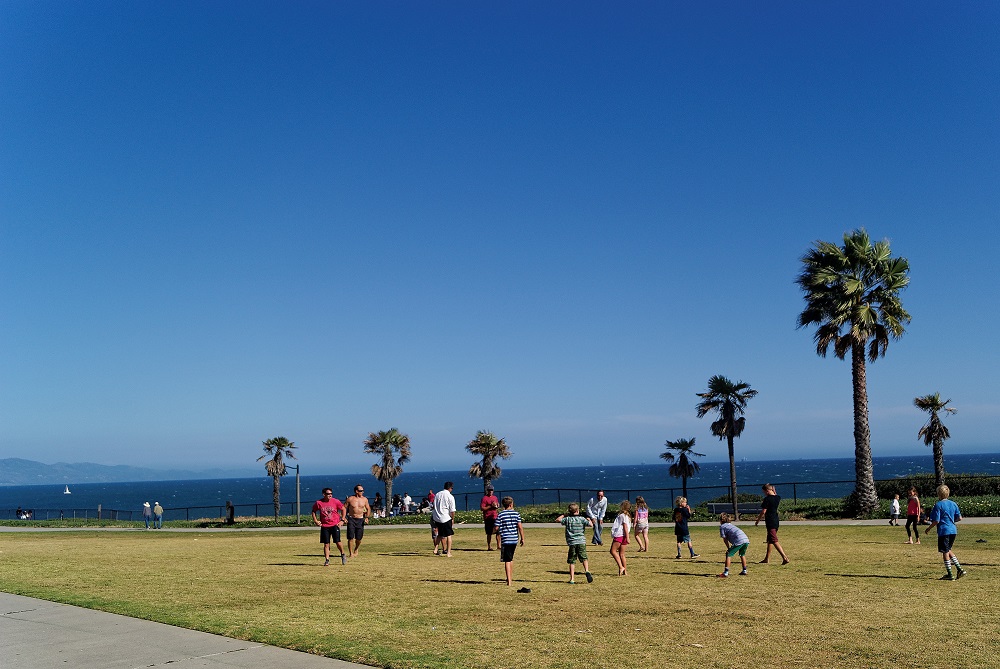 Clean air is important for the health of our communities and our environment. Photo: SBCAPCD

Ocean-going vessels transiting the California coast generate nitrogen oxides (NOx, a precursor to smog), sulfur oxides (SOx), particle pollution, and greenhouse gases. These vessels account for more than 200 tons of NOx per day emitted off the coast of California, which affects ozone levels onshore in many regions of the state.

Representatives from shipping companies commented about their involvement in the 2019 program:

Mediterranean Shipping Company (MSC): Stanley Kwiaton, General Manager of Port Operations-West Coast: “As a responsible family company that was born out of a love of the sea, MSC has a longstanding commitment to marine and wildlife conservation. We are actively involved in a number of projects aimed at protecting marine ecosystems and we are  especially proud to be recognised with the highest award for participating in this vessel speed reduction incentive program, striving to improve air quality, while protecting blue whales and other marine species.”

Polynesia Line: Mugurel Calin, Operations Manager for North America: “We are honored to receive this Award and to do our part in protecting endangered blue whales and the environment. As a subsidiary of The China Navigation Company and of the Swire Group, our aim is to create long-term value for our shareholders. The award affirms that we are on the right track to do so; as corporate citizens who care for sustainable development and to cause zero harm to our stakeholder communities and assets under our stewardship.”

COSCO: Hao Dong, President: "We are proud to sponsor and participate in the Vessel Speed Reduction program. Our contribution may be limited, but together we can make the difference in protecting and preserving the blue whale, as well all oceanic life. The ocean is our lifeline in this industry: protecting it and all inhabitants are the only logical path for success."

Evergreen Marine Corporation: Eric Hsieh, President: "Evergreen is dedicated to providing the most eco-friendly container shipping services and to minimizing the environmental impact on marine life, port communities and humanity in general. We are therefore very proud to be a partner in the VSR program and are pleased to have been recognized by NOAA for achieving its high standard of performance over the last four years. We hope by foregoing the incentive payment offered we can provide a positive contribution to the program in the future."

NYK RORO: Jack Duesler, Area Operations Manager, Pacific Southwest: "It has been a pleasure working with NOAA and their affiliates in this program. The tier system is a great incentive that is difficult yet achievable. While we have yet to earn the prestigious Sapphire mark, we will keep analyzing our fleet and our movements and are convinced we will be able to reach it soon. We look forward to continue being involved in this program!"

K Line America: Lee Lara, General Manager, Pacific Southwest Region: "We are extremely proud to be a part of this program and grateful for the opportunity to be able to contribute in enhancing marine life conservancy and improving air quality. NOAA’s program coordinators must be commended for their tireless dedication and professionalism not only for making the program a huge success but more importantly for raising awareness."

Maersk: Lee Kindberg, PhD, Head of Environment & Sustainability - North America: "The Protecting Blue Whales and Blue Skies program is unique . . . The coalition of participants and sponsors works together each year to achieve goals in both air quality and whale protection. Maersk has participated each year since 2014 and we appreciate the opportunity to continue to participate in this worthwhile effort."

The VSR incentive program has expanded in scope and environmental benefits each year, including 2019, which marked its fifth year. Highlights of the 2019 program include: