Is Mixability the Same as Compatibility for Hydraulic Fluids?

The difference between mixability and compatibility, as well as the long-term negative impact that incompatibility can have on your equipment. These are topics that often don’t get the attention they deserve.

You can mix different Environmentally Considerate/Acceptable Hydraulic Fluids, but the question remains: do these different fluids work together efficiently without negative impact on components of the hydraulic system? The answer is no.

The variety of base oils (esters) classified as «HEES»

When it comes to bio oils (Environmentally Considerate/Acceptable Hydraulic Fluids), competitors often claim mixability and full compatibility by stating that they use HEES/synthetic esters as base oils, just like PANOLIN does. What they don’t mention in this context is that there are thousands of different HEES/synthetic esters and that just because the terminology sounds similar, it doesn’t mean you get the same performance. Otherwise, why would PANOLIN be the benchmark for high-performance hydraulic fluids, and why are other fluids not able to perform to such high levels?

When you see a reference to base-oil specifications according to ISO – which in the case of ester-based lubricants falls under the group category «HEES» – bear in mind that this group covers both unsaturated and saturated synthetic esters. This is just one reason why performance levels differ.

It is not just about the base oils, but the additive systems as well

Most of the arguments competitors make when they compare themselves to PANOLIN have to do with the base oils, but they do not consider the additive systems. Have you considered the role of additive systems? They come in many different qualities and can be mixed into the base oil in many ways. PANOLIN additive technologies are based on more than 35 years of experience and are combined from many different individual components. This is a rarity in the marketplace as it is obviously less cost-effective than purchasing a ready-made additive package from a major chemical company and mixing it into the base oil to come up with a finished product.

Different additive systems are not detectable by routine chemical analysis. The picture on the following page shows the catastrophic impact on bronze material in a hydraulic piston pump caused by the non-compatibility of additive systems in two different hydraulic fluids. 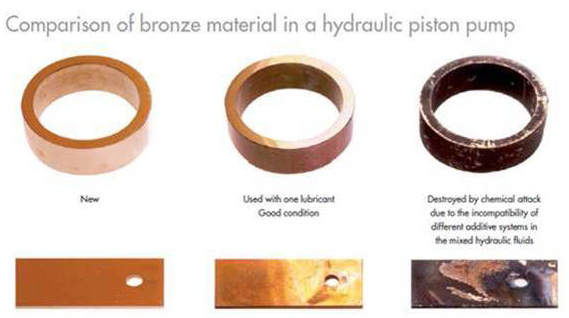 Almost any liquid can be mixed, but that doesn’t necessarily mean it is compatible. The crucial point is whether the base oils and additives of the two fluids are compatible. To justify this, the composition of the fluids has to be known, but PANOLIN does not share this information.

The serious negative effects on your equipment will not show immediately, but the degradation sets in gradually until the damage is irreversible. The cost for repair can be many times what an initial investment in the best possible and OEM-approved fluid for your machine would have cost.

• Mixability is not the same as compatibility – only compatibility guarantees the functionality of hydraulic systems without problems or failures.

• Not all esters are the same.

• HEES covers two different ester types: saturated and unsaturated, which are not the same.

• The additive systems must be compatible otherwise a negative impact on the equipment cannot be avoided.

• Contact us to get free advice and education on environmentally friendly lubricants from the PANOLIN Tec-Center.

• PANOLIN technology is committed to high performance and environmental compatibility, based on more than 35 years of experience.

• Unfortunately, competitors make claims that have a negative impact on costs and expenses for the end user.

• Leading official equipment and component manufacturers will tell you not to mix hydraulic fluids as it has a negative impact on the performance and compatibility of the system and materials.

• PANOLIN is concerned about the negative impact on your business arising from false information issued by other lubricant manufacturers.