Fitting In the Expanded Panama Canal

Opening a direct passage between the Atlantic and Pacific Oceans, the Panama Canal was a game changer for maritime trade 103 years ago. One year after the completion of its expansion project, the canal is now open to 80 percent of the world fleet tonnage.

On June 26, 2016, COSCO Shipping Panama slowly glided along the 427- by 55-meter (1,400 by 180-foot) chamber, and while two tugboats carefully maneuvered the vessel into the new locks, onlookers held their breath. The container ship was the first vessel to travel through the expanded Panama Canal. Today, roughly twelve months later, more than 1,000 Neo-Panamax have undertaken the same journey.

This expansion project has opened up a new shipping lane for larger, Neo-Panamax vessels. The construction of two new sets of locks on the Pacific and the Atlantic sides of the canal was by far the most important component of the expansion. Increasing the size of vessels able to pass through, from a maximum length of 294 meters (965 feet) and a beam of 32.2 meters (105.6 feet), to 366 meters (1,200 feet) and 49 meters (160 feet), means that today 80 percent of the world’s fleet, based on gross tonnage, can transit the Panama Canal.

Initially, traffic at the new locks was slow. This is because the procedure for guiding ships through, has changed significantly. “Instead of pulling vessels through with locomotives mounted on each side of a lock, vessels are navigated through using tugboats – with one connected to each end of the ship. This process is a lot more complex than the locomotive system,” explains Marcus Ihms, Ship Type Expert Container Ships at DNV GL – Maritime.

“But over the course of the first year, the speed at which larger vessels are processed has increased significantly. Since June 2016, the number of Neo-Panamax vessels passing through the new locks per day has climbed from one vessel in the beginning to an average of four ships per day in early 2017,” says Jeffrey van der Gugten, Market Analyst at DNV GL – Maritime. In May, the Canal Authority noted that this number had increased to an average of 5.9 vessels per day.

LPG carriers affected the most

So far, container ships and LPG carriers have been the segments that have made the most of the new locks, logging 479 and 287 transits respectively (as per March 2017).

Operators interested in rerouting their services need to take several factors into consideration before booking a slot for an existing Post-Panamax ship. One of the biggest adjustments concerns the mooring equipment. All chocks and bollards, which are used for the towing operation, need to withstand a safe working load of 90 tons, since the tugboats maneuver the vessel with greater force than the locomotives would. In some cases, the Canal Authority has required owners to change the existing mooring arrangement due to the new handling procedures.

In addition, the ship’s bridge needs to be equipped with five specific conning positions to be used by pilots during transit and from which certain equipment and indicators have to be accessible and visible. The visibility requirements during the passage are generally stricter than those defined in SOLAS V/22. On laden vessels the view of the water surface from the conning positions may not be obscured by more than one x length overall (LOA) forward of the bow. For vessels in ballast, this figure is limited to 1.5 x LOA. And finally, pilots need to be provided with platforms and shelters to protect them from sun and rain.

These retrofit measures can be carried out while a vessel is afloat and do not require dry docking. “Their main purpose is to ensure that the mooring equipment can handle the forces of the tugboats and that the vessel doesn’t suffer structural damage while passing through the new locks. But we have seen that, even if ships comply with these requirements, passing through the new locks can still be demanding,” says Ihms.

One of the general challenges in the Panama Canal is that the vessels have to operate in constant side wind due to the general wind direction in this region. “In the old locks this was not such a problem, because the vessel was fixed in the middle by the locomotive – but in the new locks, especially on the Atlantic side of the canal, vessels and their tugs can easily go adrift and slam into the edges of the funnel-shaped entrance at Agua Clara,” says ihms, adding that several operators had reported such incidents here. The damage varied from smaller dents to significant gashes in the hull. To avoid this becoming a regular issue, Ihms recommends the installation of protective rubber fenders along the entrance of the Agua Clara locks.

But overall, he sees the expansion project as a success: “The new locks can help vessels travelling between the East Coast of North America and Asia cut up to more than 5,000 nautical miles (a minimum of ten days) from their journey. And once we see everyone become a little more familiar with the new operational procedures, I think we will see transits become smoother and more efficient.” 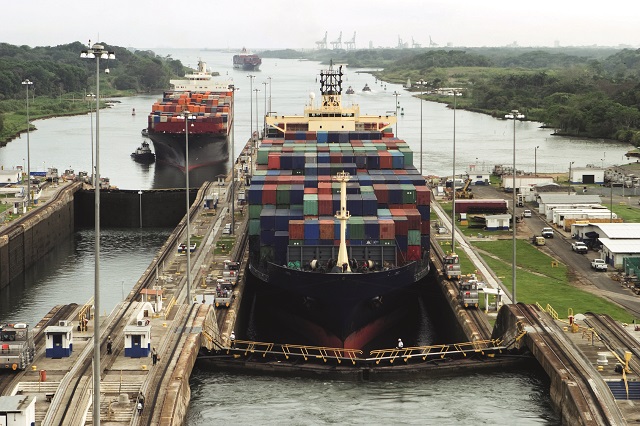 The old system: At the Miraflores locks, vessels are guided through using a locomotive.