Crystal Serenity will sail the Northwest Passage in August this year, and the voyage plan has raised industry concerns about the safety of using a non-ice-class cruise ship.

The 32-day voyage will see Crystal Serenity sail from Alaska, through the Canadian Arctic to Greenland and then New York with 1,050 guests and 650 crew members on board. Crystal Serenity will be the first large luxury cruise vessel to navigate the route, with the vessel maneuvering through 900 miles of waterways lined with glaciers and fjords north of mainland Canada.

As a precaution, the vessel will be fitted with ice navigation equipment, and last week Crystal Cruises announced the system they will install: Rutter’s sigma S6 Small Target Surveillance and Ice Navigator System.

The Rutter system provides enhanced small target detection of first-year and multi-year sea ice as well as other floating hazards. Ice does not necessarily generate the continuous radar signature required for detection by standard radar systems, and Rutter’s signal enhancement technology is an important addition.

During the voyage, the Crystal Serenity will be accompanied by an escort vessel, the Antarctic research ship Ernest Shackleton, which will also have a Rutter system on board. Its dedicated sigma S6 Ice Navigator radar system will allow for the detailed sweep of the area in advance of the Crystal Serenity.

The system has a long reference list, and three of the consultants selected by Crystal Cruises to assist them in their Northwest Passage plans, all captains with Arctic and Antarctic ice navigational experience, have used the sigma S6 Ice Navigator system previously and recognized both the situational awareness information and easy usability of the system.

One of the consultants that is currently working with Crystal Cruises, master and ice navigator Captain David (Duke) Snider, CEO of Martech Polar Consulting, believes the company has made a wise decision in installing an ice navigation system with the capabilities of the Rutter system. “What we are talking about is the ability to spot multi-year ice and glacial ice. The two of them, by the nature of their physical composition, are somewhat similar. Multi-year ice is leached out. It’s salt, and it’s become harder and denser. That’s why we don’t want to come into contact with ice older than two years old. It’s as dense as glacial ice that’s been there for hundreds of thousands of years.” 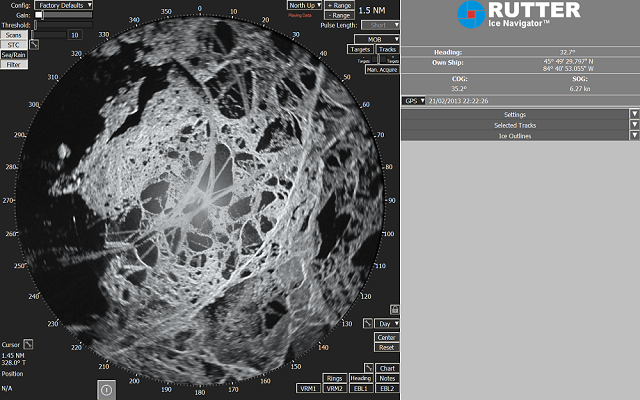 Concerns have been raised about the vessel encountering smaller pieces of ice – growlers and bergy bits – pieces of ice that could be the size of an automobile. These, says Snider, can be particularly difficult to spot in rougher seas. They are not as hard and dense as multi-year ice, making them difficult for ice navigation systems. Instead, it is the ice navigator that plays a key role.

“There’s no doubt they can be dangerous, but they don’t appear out of nowhere,” he says. “They tend to be in the vicinity of icebergs. Icebergs are a bit like comets. They leave a trail of ‘debris’ behind them, so if the iceberg is being carried southward by ocean currents, you know its north side is likely to have growlers and bergy bits.”

Snider, a master mariner and ice navigator with 29 years at sea, believes that Crystal Cruises has hired two of the best ice navigators in the passenger ship industry to work on the cruise. Combining these men and Rutter’s technology, he believes the risk of ice damage to the vessel is low to moderate on this particular voyage.

There is no simple answer to the question of what the Rutter systems mean for safe vessel speeds and choice of sailing conditions. “It depends on many variables, such as the performance of the radar sensor used (power, beam width, gain, etc.), radar antenna height and location, sea state conditions, radar cross section of the target, etc,” says Brian Johnston, Rutter’s Strategic Business Development Manager. “All of the variables go into detection probability. Where needed, we work with our customers look at scenarios for probability of detection of selected target types.”

As a result, the Rutter systems will provide more than just ice detection. Crystal Serenity will only be in the Arctic for a short period of time, and Rutter recommended the addition of the sigma S6 Small Target Surveillance system because it provides year-round capability no matter where the ship sails by providing enhanced maritime safety and security. 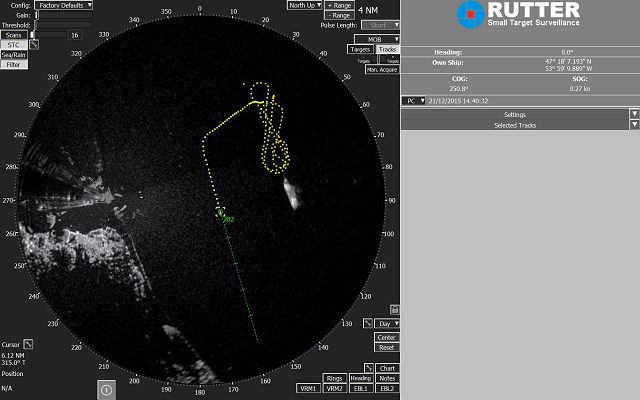 Johnston explains: “The sigma S6 Small Target Surveillance system provides all of the high resolution sea ice imagery and drifting small target detection (glacial ice and other floating hazards) as the sigma S6 Ice Navigator, but the Small Target Surveillance system has an additional advanced target tracker mode for detection and tracking of fast and highly maneuverable targets. Think of it more as a security radar mode for targets like Rigid Inflatable Boats, Fast Rescue Crafts, etc. that can pose both navigational hazards as well as security concerns. Additionally, the sigma S6 Small Target Surveillance can provide excellent detection performance for Persons In Water Search and Rescue operations should it be necessary,” says Johnston.

Crystal Cruises has already announced that Crystal Serenity will return to the Northwest Passage in August 2017.