Cruising on the Great Lakes

Cruising started on the Great Lakes at least 150 years ago, and at one time Harry Wolfe, a Great Lakes historian, reckoned there were more people asleep on boats on the Lakes than in all the oceans of the world.

One of the earliest records of a cruise on the Great Lakes is by Thurlow Weed, editor of the Albany Evening Journal, who cruised from Buffalo to Chicago and back in June/July 1847. His purpose was to attend the “River and Harbor Convention” held in Chicago on July 5.

Weed embarked on the Empire, built in Cleveland in 1844, and referred to as a mammoth steamer and one of the finest passenger ships of the time. The 265ft 1,220grt ship was a paddle steamer with 500hp engines. The main cabin was 230ft long, with passenger cabins opening off each side. There were separate salons for ladies and gentlemen, a bar, library and, apparently, a good band. On Thurlow Weed’s trip there were 300 cabin passengers.

The cruise proceeded well in fine warm weather and the night of July 3 on Lake Huron was spent in conversation and dancing the cotillion and waltz. They stopped briefly at Mackinac Island for wood, salmon and whitefish, and arrived in Chicago the night of July 4 to find all shore accommodation full. This was not surprising as the population of Chicago at the time was only 16,000; 2,500 people had registered for the conference and some 5,000 attended. As a footnote to history, an obscure congressman from Illinois spoke at the conference. His name was Abraham Lincoln.

Thurlow Weed left Chicago on July 8 for a real cruise back to Buffalo. Upbound he had taken just four days. Downbound, on the St. Louis, he was to take seven days on a route determined by passenger vote. The St. Louis was much smaller than the Empire being only 185ft long. It was overcrowded with about 200 passengers, but the price of $2.00 per passenger per day was “irresistible.” For this price breakfast was served from 7-11:00am, lunch was at noon. At 2:30 dinner was served, with a substantial tea at 7:00pm and supper at 10:00pm; the fare was reportedly “abundant and the cooking excellent.”

The Lakes route was also very popular with passengers travelling to and from New Orleans and “the North”. The route was by sternwheeler up the Mississippi and Ohio to Chicago, then transfer to Lakes steamer to Buffalo and rail to New York. This was much more fashionable than the lower route around the Florida Keys. It was also speedier, safer and less costly.

The first well-known cruise ships on the Lakes were Anchor Line’s triplets launched in 1871 – the India, China and Japan. The ships ran Buffalo-Duluth every 14 days and were 210ft LOA, 32ft beam and 1,239 GRT. The main cabin ran the full length of the deckhouse, there was a gentlemen’s smoking room and barbershop forward, with a ladies’ drawing room aft, complete with piano. The accommodation reportedly matched the finest ashore and all 43 cabins had a washbasin with running water – although there was not a bathroom on the ship. The running water came from a small tank above the basin that was filled each morning by the stewardess on her rounds. Total capacity was 120 and the ship was usually full for cruises in each direction.

Anchor Line replaced the triplets with the Tionesta in 1901, Juniata in 1904 and the Octorora in 1910, not quite identical sisters, but much larger and to a higher specification than the triplets, which continued for many years in Canadian hands. The ships were about 350ft LOA, 45ft beam, 3,299 GRT and had capacity for 350 passengers. The berth deck had 92 staterooms, 46 inside and 46 outside.  Later improvements included eight spacious parlors. The ships, as was common at this time, combined passengers and package freight. West bound they carried everything from nails to stoves, east bound it was mainly bagged flour from Duluth MN and copper ingots from Houghton MI. As the popularity of cruising grew, the freight decks were converted to cabin space, and luxury observation suites were built forward. 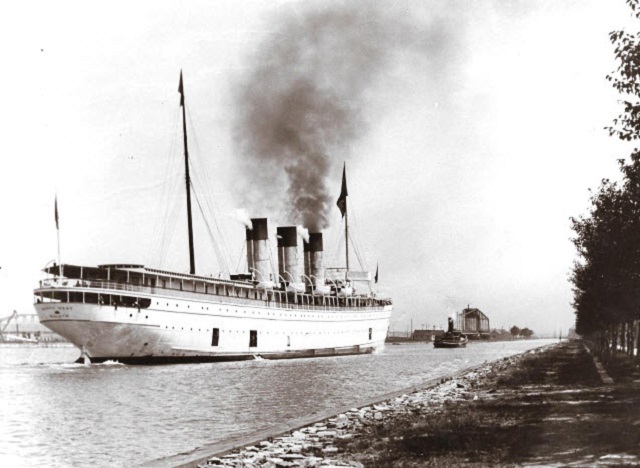 At the end of the nineteenth century, two of the finest cruise ships ever built for the trade, the Northland and the Northwest were built for the Northern Steamship Company in Cleveland. Delivered in 1894 they were 385ft long, 44ft beam, had a speed of 22 knots and carried 400 passengers and 147crew. The ships had 1,200 electric lights, more than any ocean liner of that era. There were 108 2-berth cabins, four larger cabins, nine parlor suites and two public bathtubs in the barbershop. The round trip fare from Buffalo to Duluth was $30.00 and the menu was extensive. Their biggest porterhouse, truffles, julienne potatoes and a side of lobster and a glass of milk cost $2.90, 50¢ extra for room service. The menu offered:

The ships’ primary purpose was to provide a link between railheads in Buffalo and Duluth, but many people took the round trip as a vacation.

At the same time the Anchor Line was replacing the triplets, Canadian Pacific replaced their original ships Algoma, Alberta and Athabaska with new, luxurious British built ships. The Assiniboia and the Keewatin were built in Govan in 1907 and ran until 1965. The Keewatin is the only ship remaining from the Great Lakes fleet and can be visited in Port McNicholl ON. The ships were 350ft long, 43ft beam and had a speed of 15 knots. They carried 283 passengers and one could, in later years, take a car along on what used to be the freight deck. 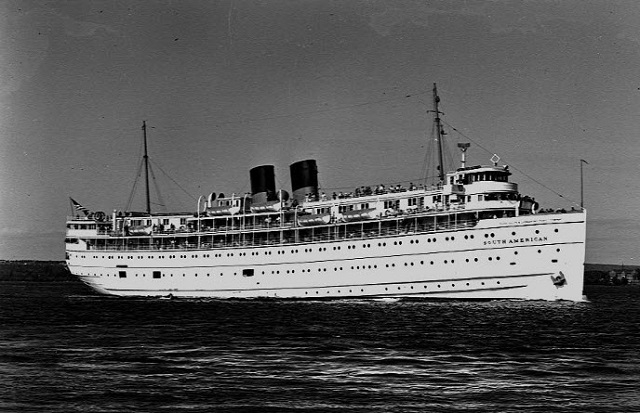 The major step forward in cruising on the Lakes was the construction, in 1913, of the North and South American. While other ships combined freight and passengers, the Georgian Bay Line vessels were built purely for pleasure with a seven-day cruise as well as five and two-day cruises that could be combined. The general pattern was Detroit to Duluth and back in five days, then Buffalo and back in two. The regular season ran late June to end August, with the ships chartered out early and late season.

Cruising on the Great Lakes during the 1920s and 1930s was generally on three, four or seven day itineraries, 70 years before the cruise industry “reinvented” the short cruise.

Although not built for the Georgian Bay Line, the Alabama, built in 1909, is often associated with these ships. It was a well-known, and luxurious, passenger/package freight vessel that ran Lake Michigan ports. It was very heavily built and often used as an icebreaker. The ship was cut down to a barge in 1961 and some of the exquisite paneling and furniture that was removed installed in Anne Cottage on Mackinac Island.

The American twins were 321ft long, 47ft beam, carried 540 passengers and 160 crew, had 31 parlor staterooms with private bath, double brass beds and mahogany furniture and had 237 regular staterooms. They operated successfully until 1967 when the South American ran cruises to Expo in Montreal, then was sold outside the Lakes as an accommodation ship. The North American was also sold in that year.

The early part of the last century saw some magnificent passenger boats. For example. the City of Cleveland III, built in 1909, is believed to be the first ship to have verandah cabins. The Seeandbee had 24 parlors, some with private balcony; 62 staterooms with private toilets; 408 regular staterooms. When built it was the largest paddlewheel steamer in the world at 500ft length, 58ft beam. The interior design was of “rich simplicity” with mahogany paneled walls with rich inlays. There was a grand staircase to the promenade deck. The 400ft main salon was forward of the lobby on the promenade deck and was divided into different areas. There was a book and periodical store, an observation room, separate men’s and ladies’ writing rooms. The accommodation was of the highest standards and the ship proved very popular on her regular Buffalo – Chicago run.

The ship ran successfully until requisitioned by the U.S. government in 1942 when it was cut down and turned into the training aircraft carrier Wolverine. This ship and the Sable, ex Greater Buffalo, were the only paddlewheel aircraft carriers, but they successfully trained thousands of navy airmen.

On the Canadian side of the Great Lakes, Northern Navigation’s Hamonic, Huronic and Noronic were well known, and very attractive to passengers looking for a cruise vacation, but by the 1950’s all but a few had gone. The “Yarmouth Castle disaster" eventually persuaded authorities that wooden superstructures could not be permitted, and now only one or two ships from the incredible fleet of river, lake and coastal passenger steamers survive. 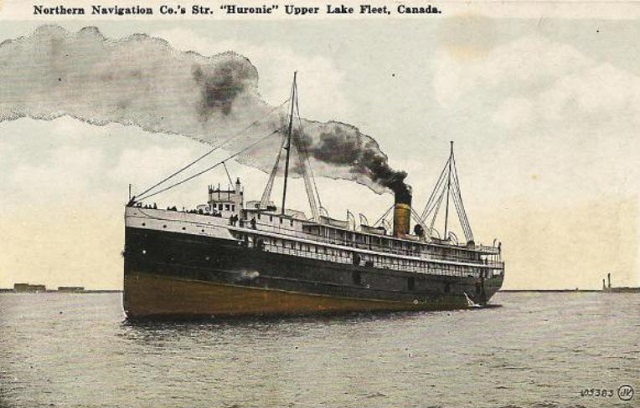 Following the departure of the South American, there was a 30 year drought, only partly relieved by excursions into the lakes by Fjell-Oranje Line cargo/passenger ships Prinses Irene and sister ships between 1959 and 1963, followed by Stella Maris and World Discoverer. In recent years there were some cruises by the small U.S.-flag sheltered water cruise ships, Nantucket Clipper and Mayan Prince. Then in 1997, after considerable planning, Hapag-Lloyd introduced their four star ship cColumbus to the lakes and the overnight cruise business really returned to the region. 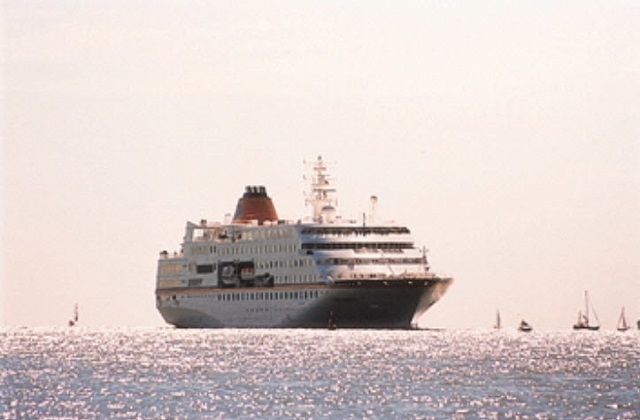 At that time, the 423 passenger cColumbus, with an LOA of 472ft', was something of an anomaly in the international cruise industry. However both its Great Lakes and international voyages regularly sailed with a 90 percent or better occupancy. In 1999, the 330ft French flag yacht Le Levant, commenced Great Lakes cruises. From an initial commitment to a four-cruise exploratory program, they quickly moved to six cruises for 1999, and eight for 2000 and 2001. 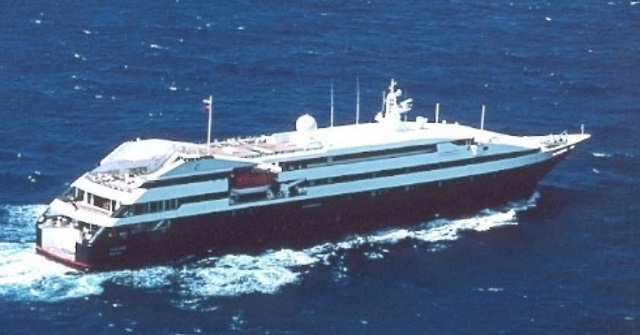 There have been ups and downs in the last several years. An attempt in 2001 to introduce a full season cruise program with a small Greek ship, the Arcadia, regrettably collapsed in bankruptcy of the operator after food service inspections produced an unacceptable rating for the ship. Other ships that suffered from early financial problems of the owning company were the 210 passenger Victory 1 built in 2001 as the Cape May Light, which is now back cruising on the Great Lakes and Seaway. It has recently been joined by Victory II, which was laid down as the Cape Cod Light, but never completed due to issues with the kitchens.

After Hapag Lloyd gave up its charter from Conti Reederei for the cColumbus, the ship has returned occasionally as Plantours Hamburg. Another small ship, also 210 passengers, the Pearl Mist cruises regularly in the Great Lakes. 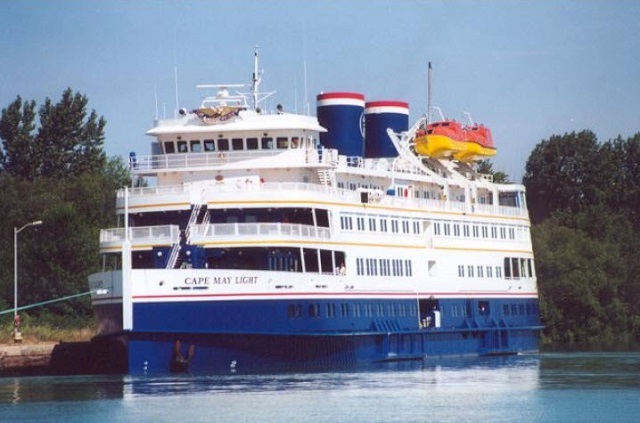 Cape May Light (now Victory 1) in the Great Lakes