While frequent debates occur over the causes of climate change, the reality of a changing climate over the past 50-70 years cannot be disputed. Across the globe, data shows increasing average temperatures. Average global surface temperature has increased 1.14 degrees Celsius since the late 19th century, with increased frequency of extreme temperatures. 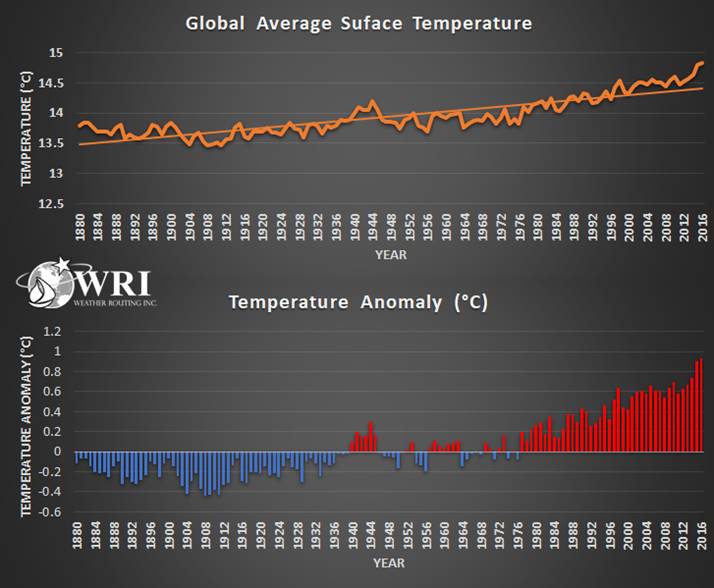 From a meteorological and oceanographic perspective, there have been other “signs” of changing weather patterns and warming oceans:

1) Increasing frequency of “bomb cyclones” across many parts of the world, including off the U.S. East Coast (image at top) and across the Aleutians and Gulf of Alaska. A recent storm off the Aleutians in late December set a record low pressure for this region, with a minimum pressure equivalent to a Category 4 Hurricane. 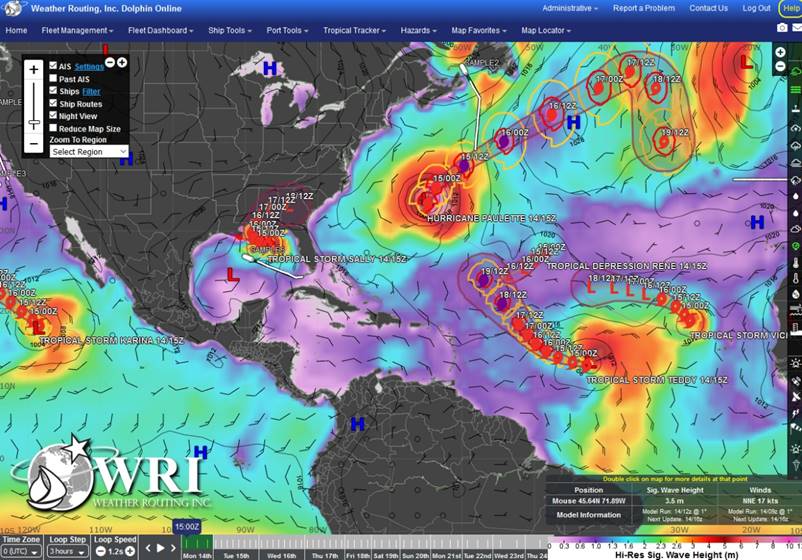 Six active tropical systems at one time across the Atlantic/East Pacific basins on September 14th, 2020 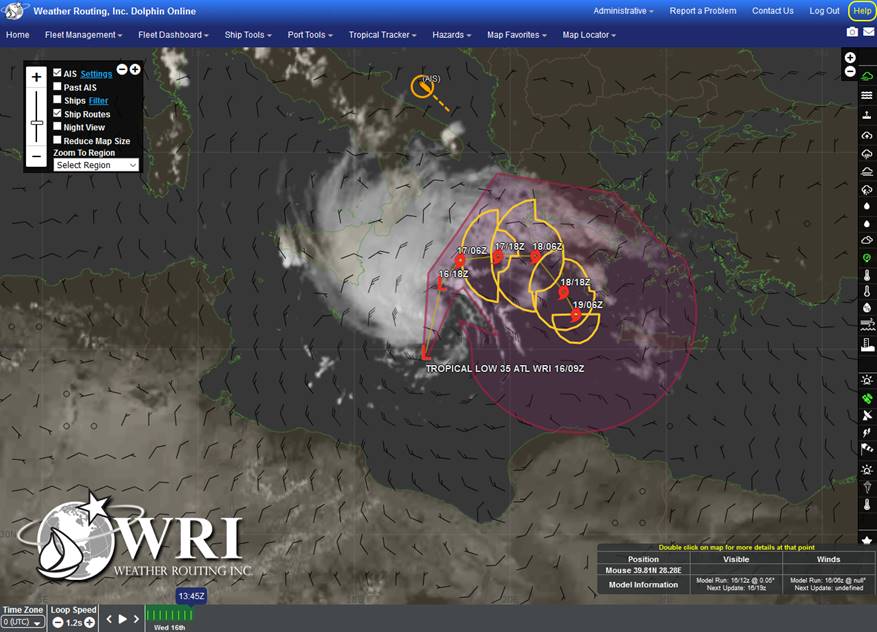 4) Sea levels are rising across the globe due to melting of glaciers and ice sheets. Global sea level has risen about 20 cm (8 inches) in the last century. The rate of increase has “doubled” in the last two decades.

5) Sea ice is decreasing in most parts of world in view of warming global temperatures.  Greenland and Antarctica ice sheets have decreased in mass consistently since 1993. 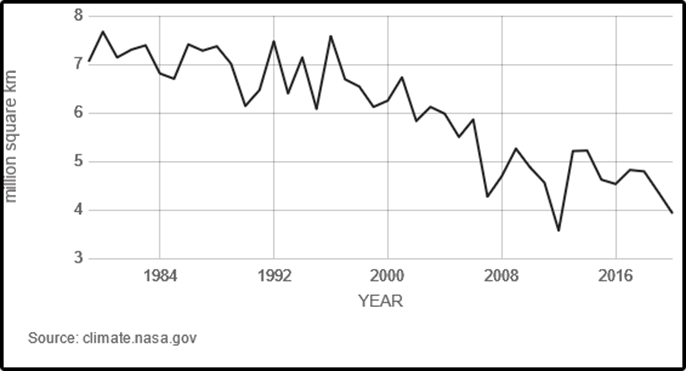 While the above issues are certainly of interest (and concern) for most people, they have a particular impact on the shipping industry.

Stronger and more frequent storms (both tropical and winter-time) are resulting in significant impacts to typical maritime trade routes. Vessels are often required to adjust planned routes to minimize or avoid heavy weather impacts, potentially resulting in delays and additional bunker consumption. Vessels which are not using a weather routing company may experience significant delays, or in worst-case scenarios, loss of cargo or damage to the vessel. Added delays or potential for “damage” equals added cost to the maritime sector.

Ports are also impacted by the increasing frequency of storms, with potential for damage to infrastructure in the strongest storms. At a minimum, these systems will more frequently disrupt loading/discharging operations, resulting in delays for owners, charterers, and customers. In the longer-term, ports will also be impacted by rising sea levels that may eventually require significant infrastructure changes at these ports, with potentially devastating effects for the coastal communities.

More frequent “flood” tides will have a significant impact to loading/discharging cargo due to flooding and higher tide levels. In some cases, port Infrastructure will need to be modified for higher water levels.

On the other hand, decreasing sea ice is opening up opportunities for trade routes in certain regions and at certain times of year that were impossible a few decades ago. The “Northern Sea Route” is becoming a more frequent possibility, significantly shortening the time and bunkers required to transit from the Canadian Maritimes and/or northern Europe to the Far East. In January, two icebreaking LNG carriers met in the East Siberian Sea without the assistance of an icebreaking escort!

As weather patterns change, temperatures rise, and ice melts, this also will have an impact on ocean currents. Most surface ocean currents are driven by the local winds. With stronger and more frequent storms, this will result in stronger but potentially more variable surface ocean currents. Other deep-water currents are driven by density differences. As more ice melts, more fresh water is deposited into the ocean, resulting in density changes that will impact the global current patterns. These ocean current changes can in turn lead to further changes in weather patterns.

While not usually a foremost thought for mariners, climate-driven changes to marine life may eventually impact routing options, as some areas may be “off limits” as local authorities attempt to maintain a fragile ecosystem.

Another aspect to consider is the reliability of computer programs to accurately predict conditions during these changing times. The various models and programs were developed based on climatological “normals”. Most onboard vessel routing programs only use one computer weather model, and it is known that each model has “biases” in certain parts of the world.

As weather patterns change significantly, it is expected that these biases in models will become more pronounced, and it is still unknown how well they will accurately handle rapidly changing conditions. An experienced meteorologist will become even more necessary to interpret the various models, and to provide real-time insights that models cannot provide. 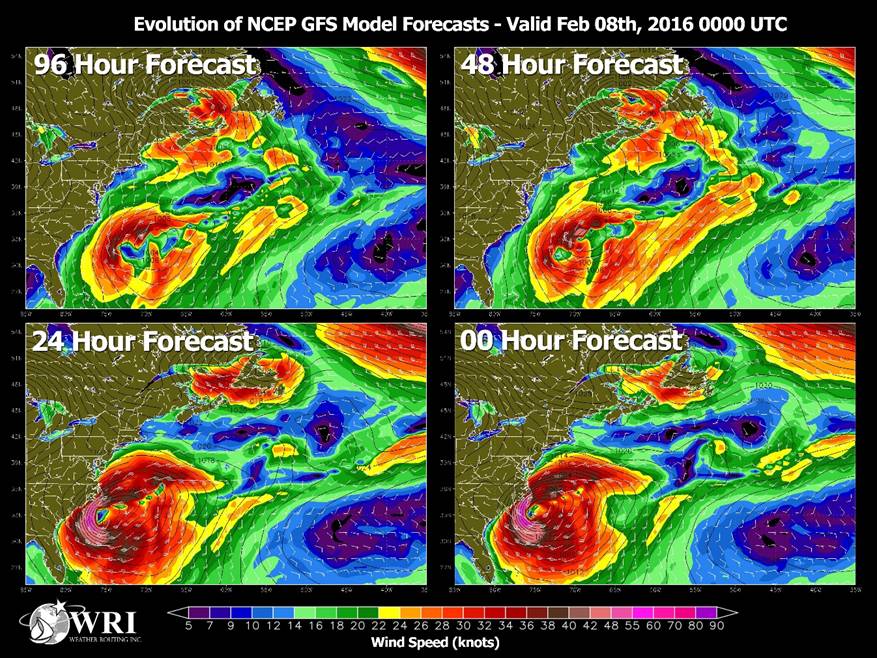 Evolution of GFS computer model prediction of a bomb cyclone off the North Carolina Coast on four consecutive days, showing a weak system well offshore four days out, but a strong storm near the coast 1-2 days out.

With the expectation of increasing meteorological and oceanographic phenomena impacting the shipping industry, it is more important than ever to have a weather routing company with experienced marine meteorologists monitoring your fleet. Weather Routing Inc. (WRI) has been assisting our clients for 60 years to achieve safe and cost-effective transits. Our optimum routing services ensure that your vessels are on the safest and most efficient transit possible, while port forecasts keep you advised of upcoming conditions at any port location around the world.

Daily tropical summaries are provided to keep you informed of any tropical activity that may impact your operations. Finally, our Dolphin Website and Dolphin OnBoard system allow you to view the latest weather information and forecasts for your transits.

Our team will be here to guide you through the changing waters ahead! We encourage you to contact us at [email protected] or visit wriwx.com to learn about how we can assist your operations.