Where Do The World’s VLCCs Sail?

Very Large Crude Carriers (VLCCs) are huge cargo vessels, with a minimum size of 250,000 dwt. Based on AIS navigation data, in Q4 2019 over 750 VLCCs (and a handful of ULCCs) were active on AIS, and about 675 were sailing on international trading routes.

Their trading patterns for the last quarter are plotted in the graph below. The width of the ties shows the number of calls. Country pairs with bidirectional connections are depicted in blue. (Trade volumes carried by Suezmaxes, Aframaxes and smaller tankers are not included.) 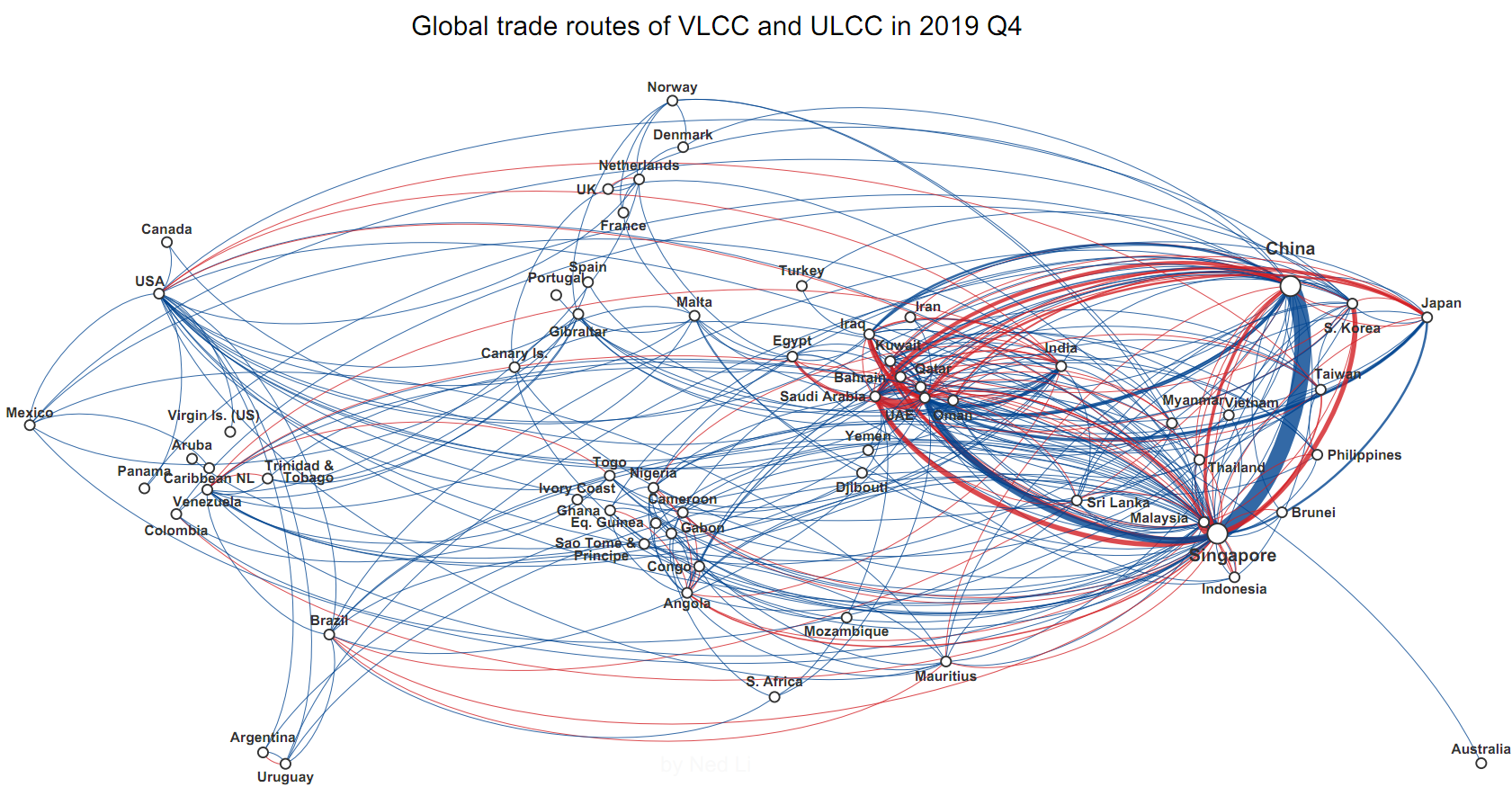 In comparison to the relatively fixed deployment of container liners, the market, supply and charter conditions influence the sailing routes of oil tankers. Therefore, VLCC sea freight routes present a loose pattern. In the eastern hemisphere, Gulf countries, Singapore and northeast Asia stand like the three legs of a tripod representing the selling side and the purchasing side for VLCC voyages. VLCC shipping in the west, on the other hand, was sparse and scattered between American, European and African countries.

In Q4 2019, these giant ships made at least 2964 cross-border calls connecting 206 ports in 62 countries. Singapore handled the most international port calls (657), followed by the United Arab Emirates, which had 416. In third was Saudi Arabia, which had 311, followed by China with 275. By port, Fujairah was the second-busiest port for giant tankers.

As the biggest end-user, China received inbound VLCC shipments from 28 different countries. Ningbo, Lanshan and Qingdao in Shandong Province were the three most heavily trafficked ports.

India was the number two oil import country for VLCCs, and it had suppliers from all over the world. Because of their proximity, India and the Gulf nations had more regular short-distance exchanges.

Japan and South Korea were also big customers for Gulf exports. Kiire and Kawasaki in Japan and Onsan and Yosu in Korea were in full swing in handling these giant oil ships.

Singapore, as a center of ships’ supply and bunkering, became the first port of call for many ships departing from China before further sailings.

Because of different shipping distances and port limitations, not all major crude oil export and import countries have big footprints for supertanker traffic. During the quarter, Russia and Germany did not report any VLCC calls. Norway had eight of them, and Canada had only one.

Ned Li is a maritime professional with over 10 years’ experience. He holds a Master of Science degree in Maritime and Transport Management and is currently undertaking a Master of Technology degree in Analytics at the National University of Singapore.