What Causes a Tsunami? The Physics Behind Destructive Ocean Waves

On Jan. 15, 2022, the Hunga Tonga-Hunga Ha’apai volcano in Tonga erupted, sending a tsunami racing across the Pacific Ocean in all directions.

As word of the eruption spread, government agencies on surrounding islands and in places as far away as New Zealand, Japan and even the U.S. West Coast issued tsunami warnings. Only about 12 hours after the initial eruption, tsunami waves a few feet tall hit California shorelines – more than 5,000 miles away from the eruption.

I’m a physical oceanographer who studies waves and turbulent mixing in the ocean. Tsunamis are one of my favorite topics to teach my students because the physics of how they move through oceans is so simple and elegant.

Waves that are a few feet tall hitting a beach in California might not sound like the destructive waves the term calls to mind, nor what you see in footage of tragic tsunamis from the past. But tsunamis are not normal waves, no matter the size. So how are tsunamis different from other ocean waves? What generates them? How do they travel so fast? And why are they so destructive?

When the Hunga Tonga-Hunga Ha'apai volcano erupted, it launched ash into the atmosphere, created a powerful shock wave and displaced a huge amount of water, generating a tsunami that raced across the ocean. (NASA/Japan Meteorological Agency)

Most waves are generated by wind as it blows over the ocean’s surface, transferring energy to and displacing the water. This process creates the waves you see at the beach every day.

Tsunamis are created by an entirely different mechanism. When an underwater earthquake, volcanic eruption or landslide displaces a large amount of water, that energy has to go somewhere – so it generates a series of waves. Unlike wind-driven waves where the energy is confined to the upper layer of the ocean, the energy in a series of tsunami waves extends throughout the entire depth of the ocean. Additionally, a lot more water is displaced than in a wind-driven wave.

Earthquakes can easily move huge amounts of water and cause dangerous tsunamis. Same with large undersea landslides. In the case of the Tonga tsunami, the massive explosion of the volcano displaced the water. Some scientists are speculating that the eruption also caused an undersea landslide that contributed to the large amount of displaced water. Future research will help confirm whether this is true or not.

This simulation from the National Oceanic and Atmospheric Administration shows how tsunami waves propagated away from an earthquake that occurred about 520 nm from Tonga in 2021.

No matter the cause of a tsunami, after the water is displaced, waves propagate outward in all directions – similarly to when a stone is thrown into a serene pond.

Because the energy in tsunami waves reaches all the way to the bottom of the ocean, the depth of the sea floor is the primary factor that determines how fast they move. Calculating the speed of a tsunami is actually quite simple. You just multiply the depth of the ocean – 13,000 feet on average – by gravity and take the square root. Doing this, you get an average speed of about 380 knots. This is much faster than the speed of typical waves, which can range from about 10-25 knots.

This equation is what oceanographers use to estimate when a tsunami will reach faraway shores. The tsunami on Jan. 15 hit Santa Cruz, California, 12 hours and 12 minutes after the initial eruption in Tonga. Santa Cruz is 4,588 nm from Tonga, which means that the tsunami traveled at 376 knots – nearly identical to the speed estimate calculated using the ocean’s average depth. 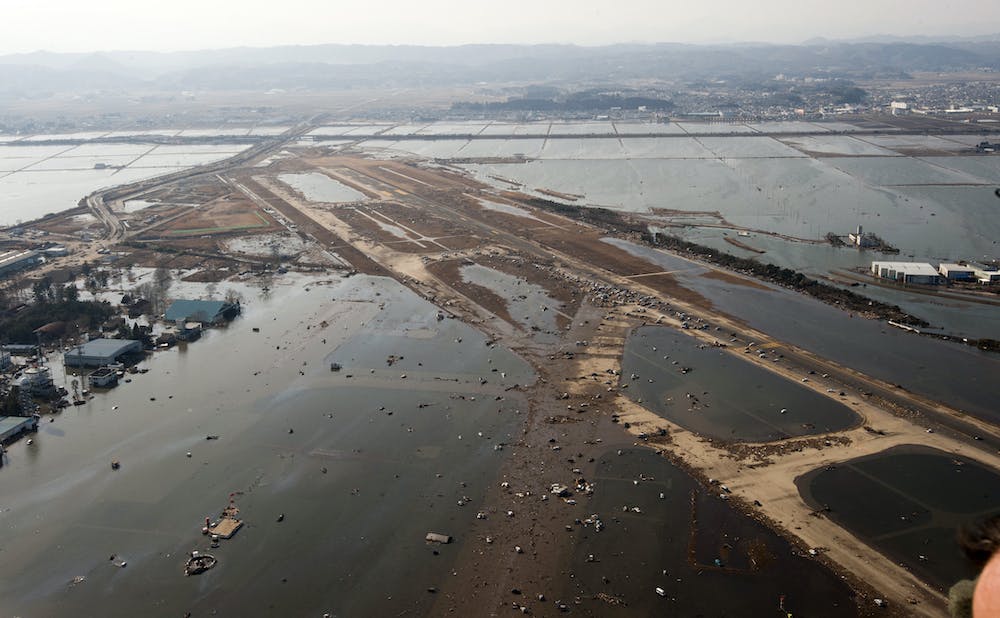 Many tsunamis, including the 2011 Tsunami in Japan, move inland and can flood areas far from the coast. (USAF)

Tsunamis are rare compared to ubiquitous wind-driven waves, but they are often much more destructive. The 2004 Indian Ocean tsunami killed 225,000 people. More than 20,000 lost their lives in the 2011 Japan tsunami.

In the open ocean, tsunami waves can be small and may even be undetectable by a boat at the surface. But as the tsunami approaches land, the ocean gets progressively shallower and all the wave energy that extended thousands of feet to the bottom of the deep ocean gets compressed. The displaced water needs to go somewhere. The only place to go is up, so the waves get taller and taller as they approach shore.

When tsunamis get to shore, they often do not crest and break like a typical ocean wave. Instead, they are more like a large wall of water that can inundate land near the coast. It is as if sea level were to suddenly rise by a few feet or more. This can cause flooding and very strong currents that can easily sweep people, cars and buildings away.

Luckily, tsunamis are rare and not nearly as much of a surprise as they once were. There is now an extensive array of bottom pressure sensors, called DART buoys, that can sense a tsunami wave and allow government agencies to send warnings prior to the arrival of the tsunami.

If you live near a coast – especially on the Pacific Ocean where the vast majority of tsunamis occur – be sure to know your tsunami escape route for getting to higher ground, and listen to tsunami warnings if you receive one.

The eruption of the Hunga Tonga-Hunga Ha’apai volcano severed the main communication cable that connects the people of Tonga to the rest of the world. While the science of tsunamis can be fascinating, these are serious natural disasters. Only a few deaths have been reported so far from Tonga, but many people are missing and the true extent of the damage from the tsunami is still unknown.

Sally Warner is an Assistant Professor of Climate Science at Brandeis University. She is a physical oceanographer and studies how water moves and mixes in the ocean.