What Brexit Will Mean for Agriculture and the Food Supply Chain

The U.K. agriculture sector will face two major losses after the U.K. leaves the E.U. The first is the E.U. funding for the farming and rural communities development, a total of over 26 billion EUR over 2014-2020. The second is the protection of the U.K. farmers against unfair trade practices through the new E.U. - Unfair Trading Practices Directive (EU - UTP). After Brexit, only U.K. farmers doing business with buyers in E.U. states will be protected.

To address the issue related to the E.U. funding for agriculture, the U.K. will have to replace the E.U. support for farmers and rural communities in time for leaving the E.U.

Farmers and rural communities receive over 26 billion EUR funding from the E.U. through the E.U. Common Agriculture Policy (CAP) during 2014-2020. The CAP was established in 1962. It is implemented using two main financial mechanisms: European Agricultural Guarantee Fund (EAGF) and the European Agricultural Fund for Rural Development (EAFRD). The EAGF provides direct payments to farmers and the EAFRD provides funding to rural communities to ensure balanced development across the U.K.

The U.K. receives direct payments of 21 billion EUR from the E.U. (EAGF) for the 2014-2020 period. The funding is distributed as follows: England 70 percent, Scotland 20 percent and Northern Ireland and Wales 10 percent. The U.K. is the recipient of the fifth largest sum from all the E.U. states. The subsidies can make up to 80 percent of a U.K. farmer's income.

The E.U. funding for rural development (EAFRD) allocated to the U.K. consists of 5.2 billion EUR for the 2014-2020 period. The U.K. receives the seventh largest amount across the E.U. England will receive 67 percent, Scotland 16 percent, Wales 13 percent and Northern Ireland four percent.

It is clear the U.K. exit will impact the agricultural sector across U.K., therefore the U.K. government must ensure the Agricultural Bill includes all necessary measures to prevent losses for the farming and rural communities, and the Bill is passed in time for the U.K. exit from the E.U. It is also important for consumers that any trade negotiations on agricultural products take into account the standards and regulations now in effect, related to food safety, health and environment.

In regards to the second issue - the E.U. - UTP Directive for the protection of E.U. farmers, the U.K. will have to design its own policy to ensure protection of its farmers against unfair trade practices.

The Directive identifies 16 unfair trading practices involving suppliers and buyers. It prohibits ten practices, such as buyers not paying farmers on time, buyers asking farmers to pay for wasted food, or canceling orders on short notice. The other six practices are allowed only "subject to clear and unambiguous agreement beforehand." These refer to marketing and advertising, when the buyer expects the supplier to contribute to the cost of promoting the products. The E.U. - UTP Directive applies if at least either the buyer or the supplier is located in the E.U. Therefore, U.K. farmers working with buyers in non-E.U. states will not be protected. The E.U. - UTP Directive has been adopted by the European Parliament in March, and has to be adopted by the current European Parliament before it can enter into force. After it enters into force, each member state has 24 months to adopt it as national law and to designate an authority to enforce it. After another six months, the member state must start applying the Directive.

After the U.K. leaves the E.U., replacing the E.U. subsidies for farming is not as easy as using the U.K. payments to E.U. to pay the farmers and ensure the development of rural communities. There are risks and losses that the agriculture sector will incur. U.K. products will be subject to tariffs under WTO rules, therefore they will not be as competitive as products of other E.U. states. In addition, U.K. producers will have to ensure they retain the certifications for food safety and health and meet the requirements of the E.U. member states.

What to expect - Effect on the U.K. food and drink industry

Post-Brexit, U.K. businesses will be trading under WTO rules. Businesses that are part of global supply chains, importing raw materials and products, will incur higher costs. Businesses will pass on these costs to the consumers when selling domestically, or will increase the price of finished products for exports. In addition, there is a risk for companies to reduce operations, since higher costs mean lower margins and job losses.

The U.K. produces only 60 percent of the food it consumes. Since 40 percent comes from imports, we expect food prices to increase significantly and affect consumers across the U.K. 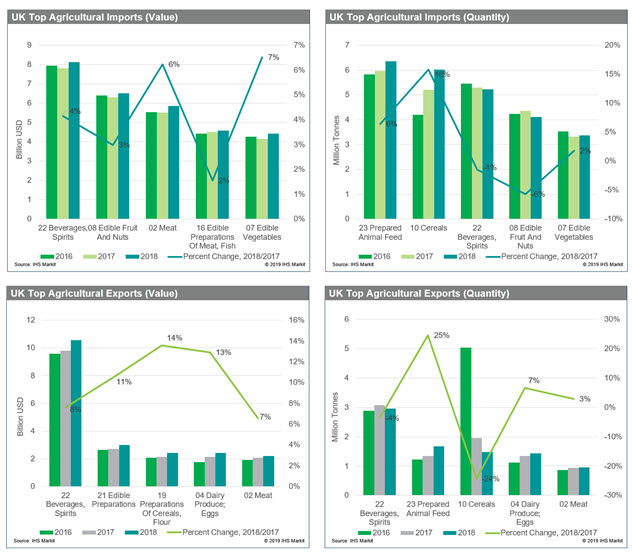 The U.K. food and drink industry must support innovation in order to grow. For example, there is a shift from a demand in soft drinks to a demand in functional beverages. Industry reports show that after the E.U. referendum, revenue fell due to weakening consumer confidence, hence lower domestic demand. In addition, Brexit brings uncertainty in the food and drink industry in regards to labor. The sector employs over 100,000 E.U. workers from outside the U.K., representing more than 25 percent of the food and drink workforce of over 450,000. The whole U.K. food supply chain employs four million workers.

Post-Brexit, there will be shortages or delays in imports of certain products, due to customs checks and higher tariffs. Fruit and vegetables imports will likely be affected by new customs processes and long delays at the border. The whole U.K. food supply chain will be affected by a fall in exports, increased prices of agricultural imports leading to lower margins and job losses for small and medium enterprises. Consumers will pay more for the same agricultural products they used to buy and will have lower disposable income to spend or save. Lower spending will affect other sectors of the economy, through lower demand leading to job losses. These are challenges the U.K. government, businesses and consumers will face post-Brexit.

The U.S. Department of Transportation’s Maritime Administration announced the availability of $19.6 million in funding to small shipyards through the Small Shipyard Grant Program. The program is designed to support efficiency improvements and modernizations that allow U.S. shipyards to compete more effectively in the global marketplace.  “America’s shipyards are a vital foundation for both our national security and our nation’s economy. U.S.-Flag commercial vessels—built and maintained right here in the U.S.—carry not only military equipment and supplies, but many carry...