Windmill-powered vessels have been around for some 40 years. One example of such a vessel carrying a deck mounted windmill sailed directly into a headwind to wind a race amongst wind powered sail boats. While sailboats lean over in response to the wind, pumping water between vessel mounted tanks has proven to reduce vessel rolling tendencies. Deck mounted sails and airborne flying kite sails are very helpful to vessels either sailing with a crosswind or parallel to the wind direction. So far, windmill powered vessels have proven capable of sailing a vessel directly into a headwind.

Research needs to explore the possibility of developing a floating technology capable of carrying a mega-size wind turbine that can be towed across ocean by a large vessel, while providing propulsive energy to such a vessel. In integrated/articulated tug-barge technology involves a tug unit pushing and navigation a barge. An alternative concept would involve a twin-hull catamaran vessel carrying a diesel-electric generator to provide electric power to propellers installed under the hull of the barge. There would be scope to replace the diesel-electric generator with vanadium flow-battery technology or even liquid air energy storage to provide electric power.

While most of the electric power would go to the main or leading unit, a small amount of power would be allocated to electrically driven propellers installed on the towed unit. Such an arrangement would greatly reduce tension stress loadings on the towing cable and allow for relative pitching, relative roll, relative yaw and relative surge between the forward and trailing vessels. Availability of suitable winds in some regions internationally would allow for the installation of a wind turbine on the trailing vessel, to generate electric power when the vessel combination sails into a headwind.

There are several methods by which to stabilize offshore floating wind turbines, the main methods being buoyancy and ballast for mobile turbines. Some racing yachts have used a hydrodynamic heavy weight installed at the bottom of the keel to offer a measure of stability when sailing in severe crosswinds. Where additional weight is allowed, transferring water amongst strategically placed tanks also offers a stabilizing method. A trio of strategically placed small-water-area hulls may carry a mobile floating turbine, with the option of additional ballast and water transfer technology to cope with the combination of severe wind and wave conditions.

The main application of towed floating wind turbines would be to provide energy when sailing into headwinds. Airborne kite sails would provide a measure of propulsion when sailing parallel to the trade winds. Mobile floating wind turbines would be secured at special offshore mooring sites located near main ports, with energy from a local power generation assist vessel supplying propulsive energy to a ship as it moves between port and the offshore mooring site. Moored wind turbines could connect via submerged power cable to the port or local electric power grid.

Offshore mooring of mobile wind turbines would allow great flexibility in terms of overall height and sailing width, where hulls might be spaced more than 300 feet apart. A single cable or multiple cables would connect between the structure of the turbine assembly and the stern of the vessel to which the turbine supplies electrical power. While the three-bladed horizontal-axis wind turbine (HAWT) would be the natural if not obvious choice, advances are occurring in the development of more efficient vertical-axis wind turbine (VAWT), with the typhoon technology from CHALLENERGY from Japan showing promise.

While horizontal-axis turbines carry the electrical generator and gearing at high elevation, vertical-axis can carry much heavier electrical generation equipment and related gearing at much lower elevation and closer to water level. Traditional vertical-axis turbines have operated mainly in “push” mode on the upwind side of each section while horizontal-axis “propeller” turbines operate with the combination of “push” mode on the upwind side and “pull” mode on the downwind side, comparable to the low-pressure zone on the upper surface of the wing of an airplane in flight. However, new research is bringing about change.

The CHALLENERGY vertical-axis typhoon turbine uses Flettner Rotors with trailing fins installed at a distance from the central-axis of a vertical driveshaft that in turn drives electrical generation equipment. Wind spins the rotors causing torque, with peak torque actually occurring at just about zero RPM. The horizontal load of a large-scale typhoon turbine assembly can be carried by a curved rail built into the mobile floating turbine carrier, with wheels installed below each Flettner Rotor to ride the circular path on the rail and carry the weight of each rotor. Competing VAWT’s have begun to appear and are being tested. 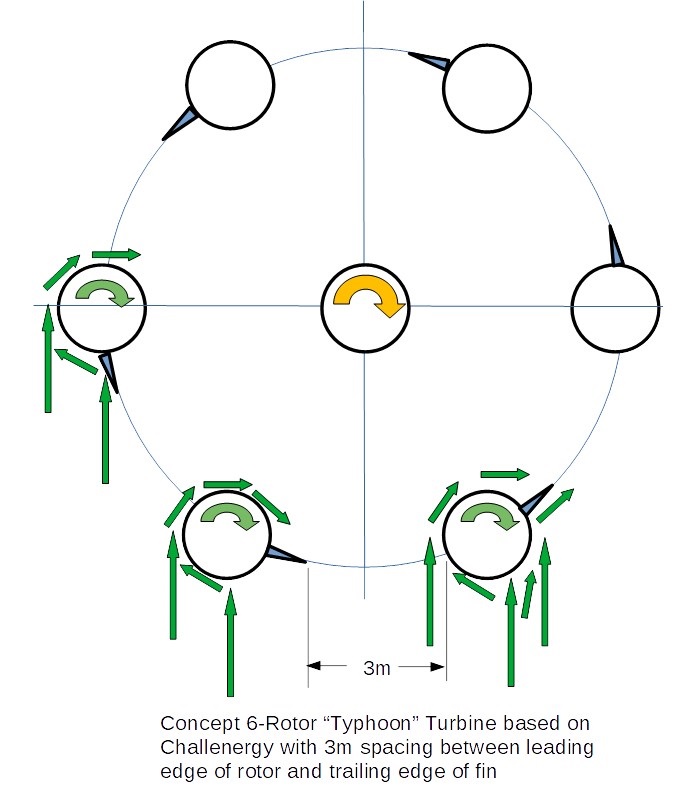 Horizontal-axis propeller turbines have been developed to generate up to 14,000 kW at 40 percent conversion efficiency measured against total swept area. In mobile operation, a vertical-axis turbine carrying heavier gearing with a combination of generators placed at low elevation close to water level, can be allowed to produce greater output in powerful winds. The typhoon capable horizontal-axis turbine from General Electric offers 4,200 kW using 117 meter turbine blades. A turbine that produces 1,000 kW from a wind speed of 45 miles per hour could generate over 8,000 kW from a wind blowing at 90 miles per hour.

One of the builders of vertical-axis wind technology offers a slat on each curved section, to briefly produce a low-pressure zone on the surface of the downwind side of each section as the wind pushes on the upwind side. The net result is an increase in power output. A ship that requires 32,000 kW of power to sail at 24 knots would require 4,000 kW to sail at 12 knots and several ship owners are sailing their vessels at that speed. Horizontal-axis and vertical-axis wind turbines are possible contenders for ship propulsion when mounted about a towed floating unit.

Future research will need to develop methods by which to add low-drag mobility to floating wind turbines in a way that assists ship propulsion. While several of the GE horizontal-axis are possible contenders for future ship propulsion using the towed floating turbine method, there are ongoing developments in vertical-axis turbine technology that are overcoming the shortcomings of earlier generation vertical-axis units. Ships propelled by such technology could likely see service on trans-Pacific routes and trans-Atlantic routes.