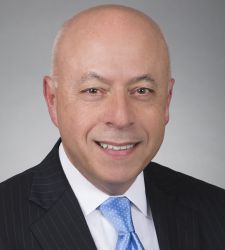 As we reflect on 2017 and plan for 2018, one word has been frequently mentioned in conversations with my colleagues across the domestic maritime industry: Resiliency.

Throughout my tenure as chairman of the American Maritime Partnership, I have had the great privilege of witnessing tremendous resiliency in our American shipyards, in our coastal and inland ports, and on our U.S.-flag vessels. This year in particular, we were acutely reminded of it. Our American maritime industry resiliently delivered for our nation’s economic, homeland, and national security—including during times of historic national disaster.

In addition to our many industry achievements, including the sustained employment of nearly 500,000 American workers, we have also confronted challenges and adversity, perhaps none more notable than the massive devastation inflicted by Hurricane Maria on Puerto Rico and on our surrounding neighbors in the Caribbean. Yet even as our maritime employees and their families contended with the aftermath of this year’s storms, the American maritime industry immediately responded to the needs of the nation. They delivered fuel and essential cargos, helping those impacted by the storms get the supplies they need to rebuild their lives and communities.

I couldn’t be prouder to be part of an industry that responded the way ours did this past year. And it was more than simply answering the call of duty—these valiant efforts entailed crews and employees putting their own personal lives on hold to get vessels moving; companies and mariner families donating thousands of pounds of containers filled with relief items; the addition of numerous American vessels to offer service to Puerto Rico; and company officials and mariners working around the clock to deliver relief. Our ‘Jones Act Armada’ was there before the storms hit, and we have demonstrated through our ongoing investments that we will stay there long after to meet the island’s enduring recovery needs.

But, unfortunately, we know that despite the resiliency of our industry, we have detractors who would rather engage in sensationalism and prioritize agendas over facts. Over the past year, the Jones Act was frequently scapegoated and targeted. Profiteers and the media utilized Hurricane Maria to promote an agenda that would benefit only foreign maritime corporations at the expense of the American worker and our national security. They ignored the facts: the American maritime industry was there to answer the call with the necessary capacity to deliver immediate relief, and the Jones Act industry continues to support the Puerto Rican economy through job creation and the reliable, cost-effective delivery of goods.

Like our vessels and crews that continue to deliver for not only Puerto Rico but also our entire nation, we too must be resilient in defending the Jones Act. We must remain fully committed to educating policymakers, the media, and the public on the fundamental importance of this law to America’s economy and security.

This January, I am pleased to pass the helm to my good friend Matt Woodruff of Kirby Corporation who will skillfully guide the course ahead on behalf of the men and women of the American maritime industry as the new Chairman of the American Maritime Partnership. Under Matt’s leadership—as was the case during my chairmanship and that of my predecessors—the American Maritime Partnership will remain committed to the promotion of the domestic maritime industry, its significant economic and national security benefits, and the importance of the Jones Act as the critical foundation that supports our industry’s essential work.

In closing, I want to thank the men and women who comprise the American maritime industry and have continuously demonstrated their tenacity and dedication. Your work across all 50 states and U.S. territories, including Puerto Rico, delivers an irreplaceable service to our economic, homeland, and national security. The American maritime industry is the very cornerstone of our nation, and we must continue to be resilient in championing its importance.